Dinner at the newest branch of Tim Ho Wan 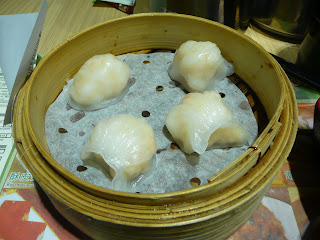 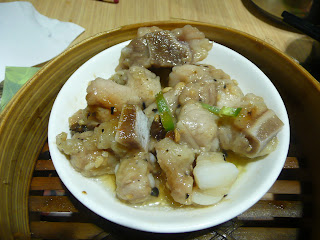 They taste pretty good too! 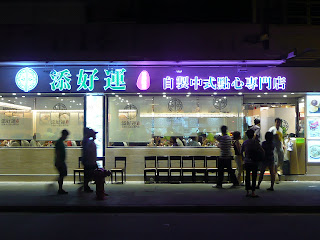 The newest branch of Tim Ho Wan is open
from morning into the night :)

How long are you prepared to wait in line to get some dim sum? To judge by more than one report, there really are quite a few people who are willing to wait for up to three hours to dine on the dim sum at Tim Ho Wan -- or, at least, its Michelin starred original Mongkok branch.  I have to admit though that I am not among that group.  Consequently, I've not thought to go to the original branch of the famous dim sum mini-chain -- and, until last weekend, I had not been to its other branches either.

A couple of weeks or so ago, the fourth and latest branch of Tim Ho Wan opened up mere minutes walk away from where I live.  Almost right from the get go, crowds gathered outside -- and the large numbers of people waiting outside the restaurant twice put me off attempting to go there for brunch.  But last Saturday evening, I first walked by the place and then managed to walk right straight in and get a table!  (And although I initially chalked it down to there being fewer takers for dim sum at dinner time, just about 10 minutes after I had sat down in the restaurant, the place filled up and there soon were people waiting outside for a table inside!)

Since I was eating by myself that evening, I just ordered three dishes -- two of them classic dim sum offerings and the third of which is considered to be Tim Ho Wan's signature dish.  The har gau (shrimp dumplings) arrived first -- and were quickly polished off for, yes, they were really terrific (and I consider the four har gau I got to be a bargain for HK$22 (around US$2.80)).  Next came the pai kuat (steamed pork spareribs with black bean sauce and slivers of green chillies) that may well be the delicious I've ever had -- with the added bonus being that Tim Ho Wan's cost just HK$14 (around US$1.80) per serving!

Perhaps my expectations were unreasonably sky high at this point.  If so, it serves me right that the signature po loh char siew pau (baked barbecue pork buns) -- which cost HK$17 (about US$2.20) for three -- actually didn't seem all that great to me -- and, in fact, I believe I've tasted far better versions of this combination sweet and savory dim sum at the Sun Hung Kai Centre branch of Victoria City Seafood. Also, I could be mistaken but... I may actually have had an MSG reaction from eating at this North Point branch of Tim Ho Wan as within an hour of having had my dinner in that evening, I got to feeling uncommonly thirsty.

In all honesty, I can't recall anyone having complained about excessive MSG in the food at Tim Ho Wan.  But most reviews I've found online have been of the Mongkok branch and there seems to be a qualitative difference between the branches.  A case in point: the Sham Shui Po branch may also have a Michelin star but it does not seem to have as good a name as the Mongkok branch among locals. Also, I've never heard a single person recommend going and eating at the Central branch of Tim Ho Wan.

It's still early days yet for the newest branch of the now four branch chain -- and I'm definitely wiling to go there for another visit.  This next time, however, I think I'll forego ordering the baked barbecue pork buns.  Instead, I've got my eyes set on such as the rice vermicelli roll stuffed with pig's liver (which I've had and loved at a traditional eatery in Tai Po) and a bowl of the steamed rice with chicken feet and spareribs (Cantonese comfort food!).  And in any case, I doubt that there will be much damage to my wallet at all after a meal there! :b