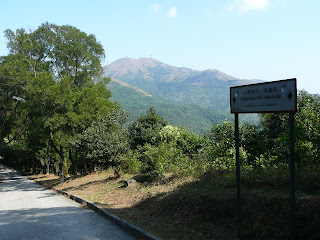 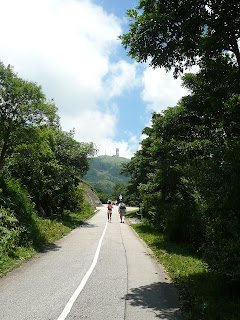 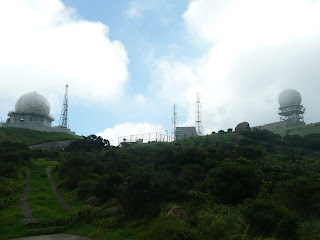 What a difference a week makes!  Last Sunday, I encountered strong winds and heavy rain when out hiking on Hong Kong Island with two friends.  In contrast, this afternoon's excursion up (and then back down) Tai Mo Shan was mainly done in sunny conditions, with skies that were bright blue where they weren't covered by large puffy white clouds -- and the refreshing breezes my hiking party today were treated to while on the upper sections of Hong Kong's highest mountain were way more gentle than those encountered last Sunday on Violet Hill.

Today's fine weather was really appreciated in view of much of this week having seen Hong Kong battered by Typhoon Vicente and a couple (more) days of heavy rain in that typhoon's wake. And because the territory had been subjected to so much rainfall and strong winds in the past few days, I had decided that it'd be a good idea to avoid sodden and waterlogged trails (along with uncleared typhoon debris) by opting for a hiking route that was actually completely paved.

While the most serious hikers tend to have a strong hatred of paved paths, my feeling is that there are times when they have their use. Also, just because a hiking path is completely paved doesn't necessarily mean that it's to be completely dismissed or scoffed at since, as was the case with today's trek, the path -- road, really -- that we opted to take led us more than 500 meters from the hike's starting point up to as close to the top of Tai Mo Shan as was allowed (i.e., the parts not declared off limits due to it being home to a government weather radar station) -- and on a hot summer's day to boot!

Alternatively put, all three members of today's hiking party agree that we got a good amount of exercise -- along with a nice sense of achievement at having more or less "conquered" Hong Kong's highest mountain -- this afternoon. Couple that with the grand views we got from the upper parts of Tai Mo Shan that stretched into the distance as far as Lantau Island to the west, Hong Kong Island to the south, the Sai Kung Peninsula to the east and mainland China to the north and it really did make for a pretty cool way to spend a Sunday as far as all three of us were concerned! :)