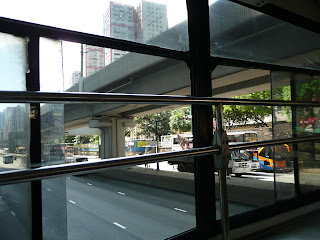 View from inside a "hot dog" bus 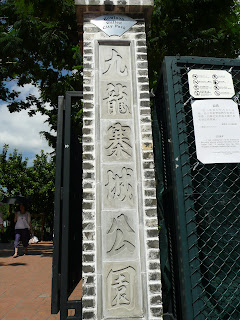 Part of a gateway into Kowloon Walled City Park 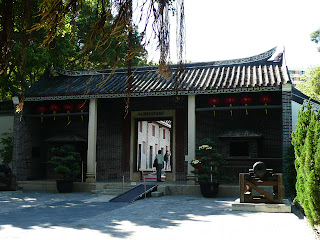 
Earlier this evening, a friend and I went to Kowloon City to have Thai food for dinner.  Not only was some of the delicious food we ate at Golden Orchid on the hot (as in spicy) side but the outdoor temperature was noticeably high too.  And even though I left Kowloon City this evening on an air-conditioned bus, I found myself thinking back to another hot summer's day a couple years or so ago when I rode on a non air-conditioned bus to that section of Hong Kong.

As I sweated and steamed inside what was colloquially known as the "hot dog" bus, little did I know that that would be my last time riding such a vehicle in Hong Kong -- and that earlier this year, the last of this type of bus would be put out of service and retired. And while this retro type of transportation had its fans (not least because it was cheaper to ride on than air-conditioned equivalents plying the same route), I have to admit that I didn't shed any tears upon hearing of their decommissioning.

On the other hand, I do regret that I never did visit the Kowloon Walled City before it was demolished and the Kowloon Walled City Park established on that very site where thousands of people had lived and worked in super dense conditions.  (And this particularly so after reading Martin Booth's intriguing account in the wonderful Gweilo of his visits there when he was a young boy.)

The first time I visited Kowloon Walled City Park, I felt a sense of anti-climax and wasn't particularly enamored of the place.  However, I've come to appreciate this public space more upon subsequent visits (including one at night to take in the very cool Power Plant show last year).

Although I do appreciate the thought and care taken in the park's overall design and layout, I have to say that it is its oldest sections -- which date back to the Qing Dynasty -- which I find the most interesting. In particular, The Yamen has captured my attention by virtue of its historic architecture but, also, its housing the main portions of the A City of (a) Thousand Faces exhibition that sheds light on life in Kowloon Walled City.

Additionally, if I'm not mistaken, The Yamen -- or, at least, a replica of it -- featured as a location in Teddy Chan's Bodyguards and Assassins (2009).  In real life, this structure had housed the offices of the Commodore of the Dapeng Brigade and Kowloon Assistant Military Inspectorate when Kowloon Walled City was a walled, garrison city for the Qing forces. But the Qing officials departed as early as 1899 -- after which it had served as such as an almshouse (as can be seen by that very word having been carved onto the space atop its main entrance and it still being very visible to this day).
Posted by YTSL at 11:45 PM

I confirmed with my husband that these were indeed the buses we routinely took, especially from Central to Stanley. They were great fun. Another HK icon bites the dust.

In terms of comfort, I think you'd prefer the air-conditioned buses to the "hot dog" buses! In any case, yeah, I think visitors tend to prefer to move around Hong Kong on the MTR (as well as by taxi and on foot) then the bus -- but really, once you get used to it, it's really pretty easy. :)

It's interesting to read your and EastCoastLife's reactions to the hot dog bus' demise. In all honesty, I didn't find them enjoyable to ride -- but maybe it was because it was my bad luck to only encounter and take them on hot days! ;(

It's easy to romanticize and get nostaligic over things when you don't live there. We also remember the car ferry that went from/to Kowloon to Central. We must be really old.

It can be easy to romanticize over Hong Kong even when one lives here... but the thing is that the summer heat can be so very oppressive. On another transportation note: I like trams -- but tend to avoid them on hot summer days... and rainy occasions too! ;b