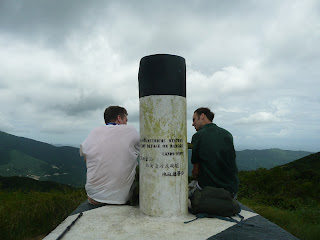 Check out the dark gathering clouds in (along with
other aspects of) this photo that was taken atop
the highest of Violet Hill's three peaks earlier today! 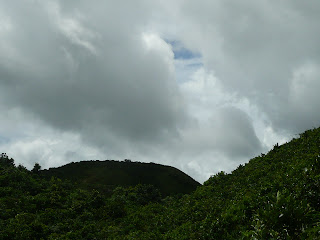 Though a bit of blue sky and sun still were about,
the big, graying clouds prompted us to get down past
the more challenging parts of the hike posthaste 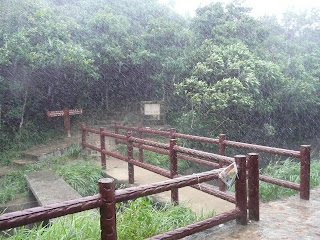 As this photo shows full well, we were unable to
out-run the (torrential) rain but at least we were
already down at Tsin Shui Wan Au when the storm hit!
This weekend has been an interesting one weather-wise.  Parts of yesterday were the hottest it's ever been since I've moved to Hong Kong -- with the Weather Underground of Hong Kong website recording a maximum temperature of close to 40 degrees Celsius in Sheung Shui and Happy Valley. With high humidity and stiflingly still breeze-less air added into the mix, it really made for the kind of weather which makes many people want to stay inside all day in air-conditioned rooms. (And oh, here's also adding that Typhoon Standby Signal 1 also has been up for much of the weekend!)

By the time I ventured out in the early evening to catch a screening of a 1980 Ann Hui movie at the Hong Kong Film Archive though, the temperature had dropped to more acceptable levels thanks to some rain falling in parts of the territory.  And as I walked towards that invaluable film facility, I was treated to the sight of a beautiful rainbow over Sai Wan Ho.

Feeling assured that the weather for this Sunday would be better than Saturday's, I went ahead and told two friends last night that I was up for hiking this weekend after all.  And sure enough, the temperatures -- as well as the humidity level -- this afternoon were lower than yesterday's.  In addition, for considerable portions of today's hike, it was pleasantly breezy and sometimes even excitingly windy, including when we were atop the two highest of Violet Hill's three peaks (one of them, at 436 meters high, was 3 meters higher than the other peak that's more frequently climbed because Stage 1 of the Wilson Trail passes through it).

As we enjoyed the views and refreshingly windy conditions while perched atop Violet Hill's 436 meter high peak though, my friends and I could not help but notice that dark storm clouds were gathering in the sky.  And while we reconciled ourselves to getting rained on before we reached hike's end, we also did figure that it'd be best to make sure that we would get down to at least the section of the hill that had concrete steps before it started pouring.

As it turned out, we had made it all the way down to Tsin Shui Wan Au before the heavens opened. Thank goodness, because the rain was impressively torrential in nature and well capable of turning sections of hiking paths into temporary streams and waterfalls!

Rather just stand for long under the limited cover offered by the roof of a country park information board, my two friends and I opted after the brunt of the storm looked like it had passed to continue our hike in the rain.  Though unpaved, the 2 kilometer or so path from Tsin Shui Wan Au to Tai Tam Road that we opted to take was on the flat side. And we were soon at hike's end -- having had a spell of no rain followed by a patch of more rain along the way!

Still, lest anyone think otherwise, we actually enjoyed our hike this afternoon.  For in addition to the interesting (to say the least) weather experiences, we did get our share of grand views and, yes, cool critter spottings along with good exercise, conversation and company into the bargain! :)
Posted by YTSL at 9:54 PM

Indeed truly a weekend of extremes! I also saw the rainbow... over Ma On Shan!