Photos from -- and thoughts on -- today's Lantau Island hike 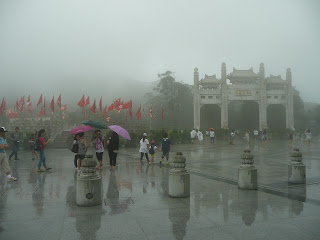 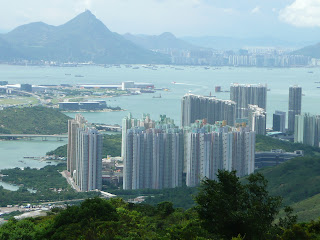 Fortunately, the sky and weather soon cleared up so much that
we were treated to clear scenic views like this of Tung Chung,
the airport and way beyond into the New Territories 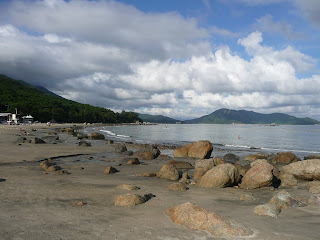 How things looked at the beach at Tong Fuk, where we
ended our hike close to four and a half hours later 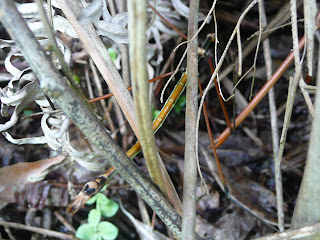 For all of the scenic views to be had along the way though,
the hike's highlight for me was my managing to spot a
stick insect -- can you see it too? -- out in the wild :)

Last Sunday, I forewent my usual hiking outing to march along the streets of Hong Kong.  The weather that day was on the hot side but still would have been really fine for hiking, and I spent much of this past week fervently hoping that we would have similar weather today.

So imagine my horror when it started raining on the bus ride that a friend and I were taking to the starting point of today's planned hike.  And as the photo at the very top of this blog entry, not only did we find that it was raining up on the Ngong Ping Plateau when we got off the bus but it also was on pretty misty to boot!

Rather than abandon our hike however, we decided to press ahead... and were we glad we did because less than half an hour later, the rain stopped and the sky began to clear -- and the air along with it.  And while some sections of the trail were more slippery than I would have liked, other portions were okay enough for me to feel comfortable walking along them without always having to just look at the ground and path immediately ahead of me.

Put another way: I was able to enjoy the views that opened up along the trail -- and also look about for interesting critters as well as flora.  Despite this being what I'd have thought would be a prime time for flowers to bloom, I didn't see many particularly eye-catching colorful flora this afternoon.  However, many cool critters were out and about -- such as a couple of species of dragonflies I don't think that I've previously spotted, a small lizard, an unusually colored grasshopper, and spiders of various sizes (including the first big spiders I've seen this year).

Additionally, at one point in the hike, I noticed a rustling in the grass and the thought did cross my mind that I'd be adding a snake to the list of creatures spotted this afternoon.  Very fortunately, it was a far more benign creature that I had noticed disturbing the underbrush -- one that is often so well camouflaged that I really did feel proud of myself for being able to notice it.  Adding to my happiness is my having managed to snap a couple of photos of it even though it was trying hard to make itself scarce or, at least, hidden.

So... can you see the stick insect in the fourth photo from the top of this blog entry?  If so, my congratulations -- and do tell me which you found it easier to spot in a photo: the stick insect pictured in today's entry or the camouflaged creatures featured in my blog entry of two weeks ago? ;b
Posted by YTSL at 10:03 PM

Spectacular pics! I found the stick insect easier to spot than the toad from a few posts ago...

Would you believe that I spotted the stick insect right away? I was primed, though! Coincidentally, a friend and I had been swapping stories about giant insects we'd read about, and last night had emailed links to each other. I woke up this morning to an article about a
giant stick insect ! (I'd sent her links about tree lobsters.)

I think it's so cool that you spotted a stick insect in the wild. Great photo!

And I'm glad your hike turned out well in spite of the soggy beginning!

The stick insect was so much easier to see than the toad.

Your first photo is lovely, romantic and dreamy.

Thanks! And interesting that you (and the others who have responded thus far) found the stick insect easier to spot than the toad... :)

Thanks for your stick insect links. Very interesting!

I'm glad you like the first photo. Have to say it came out way better than I expected... giving the conditions in which I took it.

Incidentally, my reaction when first seeing the scene was: I bet a lot of people won't believe it's Hong Kong... ;b

Glad to see the hike was good!

Indeed it was... and really, it didn't feel like a "very hot weather warning" kind of day for the most part too! :b

Love the stick insect, but I chose not to click on the "big spiders" link!

Aww... don't you think big spiders are lovely? I really do find them a wonderful sight! :b