At the July 1 march -- with a host of others, including Hello Kitty 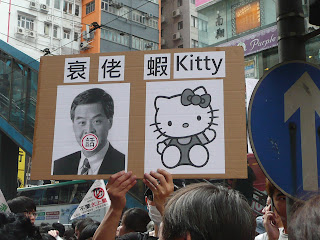 "Asshole, don't bully Hello Kitty" is how a friend
translated the words on this sign held up by
a protester at this year's July 1 march! 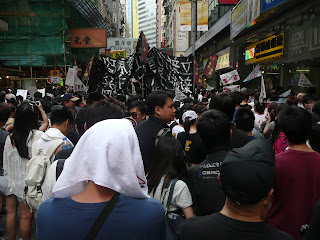 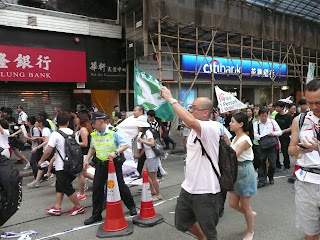 Eventually, the police had to open up more lanes along
the main roads that were part of the rally route
to better accommodate the huge crowd of demonstrators 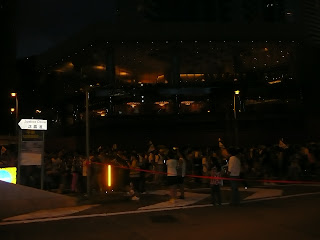 Even so, the march which had officially begun at 3pm
at Victoria Park was far from over when the sun set
over the Hong Kong's Central Government Complex,
Admiralty and the rest of the territory

Today marks the 15th anniversary of Hong Kong's handover by the British back to the People's Republic of China.  It also happens to be the day that Special Administrative Region's second chief executive, Donald Tsang, handed over the reins to Leung Chun Ying (AKA C.Y. Leung -- and, increasingly, The Wolf).  Already a seriously unpopular politician openly distrusted by many Hong Kongers, Hong Kong's third chief executive sent (further) shock waves through the territory this morning by opting to make his inaugural speech as Hong Kong's new leader in Mandarin rather than Cantonese.

I'm not sure if that unexpected linguistic choice prompted more people to join today's July 1st protest march.  But what I do know is that there were many, many people out marching in the streets of Hong Kong today to register their dissent against the territory's new chief executive along with voicing their discontent about a range of topics together with their wish for the preservation of Hong Kongers' freedom of speech, freedom to protest and many other freedoms that exist in the territory but not Mainland China.

A friend and I got to a part of Tin Hau that's very close to Victoria Park as well as the Tin Hau MTR station a few minutes before 3pm, the official start time of today's protest march/rally.  So large was the crowd already there that it wasn't until 3.20pm or so that we managed to pass through the Victoria Park gate nearest to where we met up -- and join up with another friend who had turned up to march this afternoon.  Also, so considerable was the number of protestors ahead of us that our section of the march didn't exit Victoria Park and onto Causeway Road to officially begin marching until around 4pm.

With the allocated section of the road choc-a-bloc with protestors, our section of the rally had no choice but to take small steps when walking rather than be able to more freely as well as quickly stride.  Even so, there was a sense that we were making some headway until we were directed into Jardine's Bazaar, whereupon the march ground to a halt for close to an hour.

Despite the heat (the temperature at the start of the march was 34 degrees Celsius) and other trying factors, people managed to keep their tempers and not lose their cool.  Granted that there were loud chants to "hoi loh" (Cantonese for "open (up) the road") but they were shouted less in outright anger than in a bid to be listened to by the police -- whom many people were perceiving to be less helpful as well as effective than they could and should have been.

After what seemed an eternity, my section of the crowd made it out of Jardine's Bazaar and onto Hennessy Road -- and at around 6pm, we finally made it past Canal Road.  At this point, the crowd were already spilling onto the tramways as well as filled up the lanes of Hennessy Road the protesters were allowed to march on.  But soon after, a wave of joyful shouting alerted us to the police finally deciding to give up the entire breadth of Hennessy Road for the use of the march.

With the walking space considerably widened, it became easier and faster to move along.  Even so, my friend and I didn't get into the grounds of the Central Government Complex that was the rally's destination until slightly after 7.15pm.

As we neared the rally's destination, my friend overheard a woman saying that her friend was in a section that still was only around Sogo back in Causeway Bay.  So we were far from being at the tail end of the march as we had initially thought that we were and at the same time, it was pretty clear from what we could see ahead of us that we were by no means near the front marchers.

From our viewpoint then, we have no doubt that this year's march had attracted a seriously large amount of participants.  So we must but greet with great incredulity -- as well as derision -- the police's estimated attendance number of 63,000 and be of the opinion that the crowd number was way closer to the 400,000 given by the rally organizers.

On a lighter note: I think it can be safely said that this protest march was the one that boasted the highest number of Hello Kitty paraphernalia ever -- the result not just due to Hong Kong being a place where the cute cat has a large number of fans but because of C.Y. Leung having dragged Hello Kitty into the Hong Kong political picture by using her in his defense of his residence on Victoria Peak having illegal structures.  And yes, I did my part to boost the march's Hello Kitty quotient -- with my most visible Hello Kitty item being the SPCA Hello Kitty umbrella I brought along in case it rained (but ended up using to help provide some shade from the blazing sun)!
Posted by YTSL at 11:33 PM

Thanks for your post. I've been reading about the protest online and it's great to read a personal account from someone I know. An to use Hello Kitty as an excuse......lame.

Thanks for reading. Re Hello Kitty: the cat is one for all seasons (including a political one), it really seems... ;b

You're welcome re the post. I hope my account helps shows up the police estimates of the numbers to be on the... conservative side. And re Hello Kitty: I really don't know what possessed CY Leung to name her... but it sure does appear to have backfired!

Thousands take to the streets for Hello Kitty justice! Only in Hong Kong?

Great account of the demonstration--I was able to trace the march route on a map. Protesters in Hong Kong seem awfully polite (not that there is anything wrong with that) and it is lovely that they not only expect the police to act decently and with restraint but that the police actually do.

Am glad you could trace the march route through my descriptions and a map. And yes, I do think that protesters in Hong Kong are generally much more polite than in many other parts of the world.

Re the police: alas, I have to say that people's estimation of them is going down with each large scale demonstration for it seems like they are either not very good at crowd control or deliberately making things harder for participants. :S