Gunther's Frog in greater Mui Wo 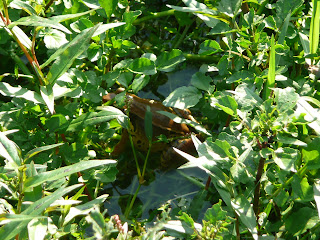 Photo of a small animal more easily heard than seen 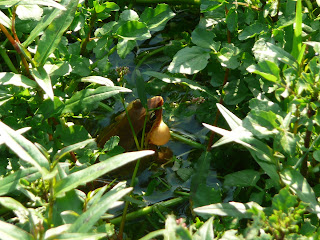 The same male frog displaying -- by inflating --
its vocal sac while making a loud call
Some time back, I saw great frog pics over at sbk's Pictures, Thoughts and Comments and got to realizing that even while I had spotted a variety of animals since moving to Hong Kong, I actually had not caught sight -- and thus taken any photos -- of frogs. Funnily enough, it was while in visiting Okinawa's Churaumi Aqarium with her and another friend that I took my first photo -- of frogs... and, as it so happens, yes, they really were doing what comes naturally -- like many a butterfly and other insects (including dragonflies and stink bugs) I've similarly caught in action!

But because that photo of the frogs was taken in an artificial setting, with a plate of glass separating me from the creatures in question, I still pined to spot and snap shots of some frogs in the wild. So I'm really happy to be able to report that I finally managed to do so today -- though it's also true enough that greater Mui Wo (where I took the photos) would not qualify in the eyes of many people as being quite "wild"!

As my mother (who's visiting Hong Kong once more) and I were strolling around the rural space this afternoon, we passed by an area where loud sounds were emanating from both sides of the country lane that we were on. Whereas my mother initially thought the sounds were the result of construction work in the area, I thought it sounded natural. But instead of the pigs or dogs that I was suspecting were the animals making the sounds, it turns out that those sounds emanated from far smaller -- and consequently difficult to spot -- creatures.

Indeed, so hard were they to spot that although several creatures were responsible for the cacophony were heard, I only managed to catch sight of one of them -- and only because I noticed some ripples in the shallow water it was in. With the help of Google, I've ascertained that what I saw -- and consequently took a couple of snaps of -- was a frog (and not a toad), and one of over 20 species of frogs that are native to Hong Kong.

Gunther's Frog is a species of frog that's widespread (in central and southern China, and also Vietnam) -- and consequently apparently pretty common in Hong Kong. So in the great frog scheme of things, it actually not all that special. However, my sighting of it feels special to me -- because it was my first ever sighting of a frog in the Big Lychee. And it's in celebration of this event that I've put up this entry -- one that comes complete with a link to a Youtube video clip that captures it's bark-like (mating) call. ;b

Thanks for the plug. And yeah to your photographing "a frog in the wild". I think when one photographs wildlife anytime you can snap a photo is cause for rejoice. And what does it matter if your frog is common to your area. You have a great photo.

The frogs I photograph are also common to the area where I live and I am thankful they remain still while I snap away.

And your "common" frog has a more interesting name than the ones I take pictures of :-)

is this the frog that sounds a little like a cow mooing??

I'd have mixed feelings about having a frog named after me.

You're very welcome re the "plug". And yes indeedy re pretty much any successful wildlife shot often feeling like an achievement to have taken! ;b

Why don't you click on the Youtube video clip link I supplied and judge for yourself? Especially since my mother and I came up with such different guesses as to what the sounds were like! ;D

I think it'd be rather cool to have a frog named after me... A snake or worm OTOH... But "YTSL's snake" would be far more acceptable than "the YTSL snake"... ;b