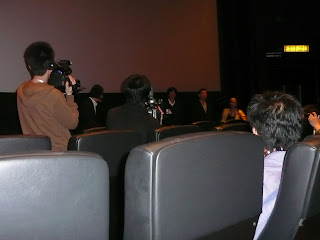 Three out of four of Beautiful 2012's directors
greet the audience at the film's world premiere
Its official site may state that the 36th Hong Kong International Film Festival began on March 21st and will end on April 5th but the truth of the matter is that there the first HKIFF screening took place on March 20th and -- the last time I checked -- additional screenings have been announced that will extend the film festival to April 9th. On a personal note, the first of the 16 screenings I have tickets for took place on the evening of March 22nd and the final one -- for now -- will take place on April 6th.

And for those who're wondering: 16 screenings is actually on the low side for me -- and yes, I have to admit to not feeling as excited as usual about the Hong Kong International Film Festival's offerings... this not least because there appear to be noticeably fewer than usual Hong Kong films being screened at the festival this year.

Ironically enough, there are quite a few more Hong Kong movies than usual currently having commercial runs in the longer cinemas. So I guess that's where I'll go to get some of my Hong Kong movie "fix" -- whereas I'll be putting the accent on "international" rather than "Hong Kong" as far as the 2012 Hong Kong International Film Festival is concerned... ;b

Two years ago, the Hong Kong International Film Festival Society commissioned a quartet of short films from filmmakers Herman Yau, Clara Law, Heiward Mak and Fruit Chan -- all of them identifiably Hong Kong filmmakers (although Clara Law was actually born in Macau and now is based in Australia) -- and screened them in one go as Quattro Hong Kong. Last year, they internationalized things with Quattro Hong Kong 2's filmmakers hailing from the Philippines, Malaysia and Thailand in addition to Hong Kong -- even if all the short films in the anthology actually were filmed in Hong Kong.

This year, the Hong Kong International Film Festival Society have commissioned another quartet of "micro films" -- but since two of these works don't take place in Hong Kong, they couldn't name this set Quattro Hong Kong 3. Instead, what we have is Beautiful 2012 -- four films whose filmmakers presumably were directed to present their own visions of what is "beautiful" and ended up producing four works that can appear to be more studies in contrast than ones obviously connected by a single theme.

Based on physical appearances, Korean director Kim Tae-yong appears to be the youngest of Beautiful 2012's four filmmakers. I'm not sure if this was a factor in his having taken the fewest risks and coming up with the most conventional of this anthology's quartet but that's how I'd describe his You Are More Than Beautiful. At the same time, this does not mean that this bittersweet comedy-drama revolving around a young man, the young woman he hired to pretend to be his girlfriend in front of his father and his elderly, sickly father didn't have some interesting and quirky touches that I could appreciate. Still, even while it did generally entertain and was fairly successful at tugging at my heartstrings, I have to say that this offering left me wishing there had been more "oomph" to it than was the case.

While Tsai Ming Liang's Walker most definitely was original in its vision and execution, "oomph" is not exactly what I'd describe this dialogue-less offering that also happens to have the longest running time of the quartet of Beautiful 2012 as having. In his opening remarks, director Tsai talked about how he'd like Hong Kongers to not walk about so quickly and, instead, slow down. While there's little chance that that ever will happen, I guess that this work whose protagonist is filmed moving ever so excruciatingly slowly in various parts of Hong Kong represents his personal effort to get Hong Kongers to be(come) more contemplative for a time. Judging from the reactions of his film's audience, however, he seems to have only succeeded in getting people to fall asleep (as was the case with the person seating to the right of me -- a certain fellow blogger who I'm leaving to "out" himself re this!), become bored and twitchy (moi) or react in some other negative manner!

Like Tsai's work, Gu Changwei's Long Tou left me puzzled as to what particular "beautiful" elements or aspects of life they were highlighting. With characters such as a middle-aged woman in which she remembers how as a child, she and her friends came across aborted fetuses in a field and proceeded to hit them with sticks for fun, a man with a gun and a troubled female who turns to drugs to help her release some of her sorrows, this work seems like it wants to make statements about many things but never quite succeeds due to it generally feeling too oblique and also disjointed.

So three quarters into my viewing of Beautiful 2012, my verdict ran along the lines of: acceptable even if not revelatory (You Are More Than Beautiful), over-indulgent and over-staying its welcome (Walker) and thought-provoking... but I'm not quite sure what to think about it as a film (Long Tou). In short: not all that satisfying! Consequently, it really came as a major relief that the fourth film of the quartet turned out to be the best of the lot by far -- one that had a story that was involving, actors who performed well, and a director who thoroughly succeeded in touching my heart, and leaving me with a lump in my throat and a little bit teary-eyed.

Ann Hui's My Way centers on a middle aged man (Francis Ng) who wants to be a woman. He's moved out of his family home and is about to undergo a sex-change operation. While he has supportive friends, his wife (Jade Leung) is not among them -- at least not initially. Early on, the general mood tends towards awkwardness (on his part), anger (on the part of his wife) and sadness (on both parts). But after he wakes up in a hospital room with a woman -- as opposed to a male -- room-mate, the ensuing scenes tend towards the positive -- and are downright moving, beautifully so even.

Love film fests! The TIFF here is fun too, but can be expensive. Love the films though :)

Ah, the HKIFF! No longer able to attend, so I look forward to reading about it through you. Thanks!

The Toronto International Film Festival does sound fun -- and huge! Glad you like it. :)

Yikes re your no longer being able to attend. And hope you'll get a good taste of this year's via my reviews. Also, please note that I have a section on the left of the blog that lists the 5 most recent films I've seen, complete with ratings and also links to reviews of them (by others). :)

I was hoping to see HK directors and artistes. Film festivals are fun. I have been attending a couple yearly in Singapore. Love the variety of films internationally.

Hope to read more exciting happenings during HKIFF on your blog.

Hi YTSL! Back in Singapore already, will keep tabs on your blog to follow what's happening in HK

And as punishment, I grit my teeth and re-watched Beautiful 2012 again :P this time with plenty of coffee to get me through Walker LOL

Actually, Francis Ng and Jade Leung also were in attendance at the screening. (And yes, it was quite a thrill for me to spot them as I like both of their work.) The sad thing is that my pics of them came out on the blurry side! :S

Hi YTSL, almost all, as they didn't have the Korean short in the media centre :-)

Wish I was still there in HK for the Wong Fei Hung retrospect!

Nonetheless... I admire your dedication. Me -- I really never want to watch another Tsai Ming Liang film after this.

Re the Wong Fei Hung retrospective... hmmm, believe it or not, I actually am not that super enthused about it! ;(

Tsai Ming Liang is not for everyone and I was so suprised to hear that the majority of film lovers do not care for his films (I do love him in all his indulgences though and especially What Time is It Over There? is a special film for me)

However I can surely understand how someone can sleep during one of his films.

In the case of "Walker", if it had been about 10 or 15 minutes long, I'd have found it okay -- and alternately interesting and amusing even. But at 30 minutes or so, it way overstayed its welcome -- and that, in general, is how I feel about the Tsai Ming Liang works I've seen. :S