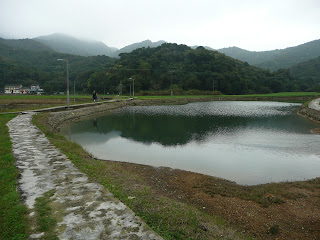 A picturesque spot on the Sai Kung peninsula
that's accessible only via foot, mountain bike
or thrice daily (at most) ferry 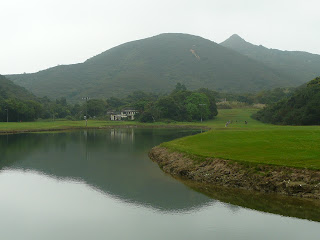 A place with the kind of vistas that it can be
difficult to believe are to be found in Hong Kong! 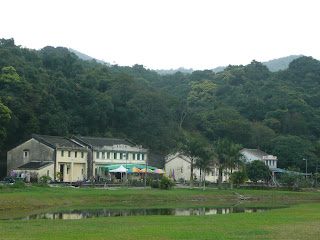 A part of Hong Kong that still is home to a rare
-- and still in use -- building dating back to 1936!
Earlier today, despite the weather forecast including mention of "rain patches" and "coastal fog", two friends and I decided to press ahead with our plan to go on an around 13 kilometer long hike in the Sai Kung Peninsula that is home to three Hong Kong country parks (Sai Kung East, Sai Kung West and Sai Kung West (Wan Tsai Extension)).

The first couple of kilometers or so from Shui Lung Wo to Yung Shue O were familiar territory to two of our party. But all three of us had not previously ventured along the sections of the trail that led north out of Yung Shue O, a now rather quiet village that used to be home to a large farming settlement, and hugged the coast for a few kilometers until it reached the even more remote hamlet of Sham Chung. So it was quite the surprise when we rounded a corner and found ourselves being greeted by a idyllic scene that appeared like something in between a beautiful mirage and idealized movie set!

To begin with, we beheld large ponds filled with calm water, green fields of what appeared to be very well kept grass and old (by Hong Kong standards!) buildings -- at least one of which dated back to before the second world war even! -- in a basin-shaped plain bordered by the coast on one side and fung shui woods and a ring of higher land on the other. Then, as we entered into that alluring space, we heard music -- someone playing a guitar and a few voices raised in song -- and realized that it was coming from a group of people sitting on the grass and looking like they were having an enjoyably mellow time.

In addition, for a hungry member of our party's delight, this neck of the woods turned out to be home to Sham Chung Manor, an eatery set up in his old family home by a Sham Chung native named Tom Li who has lived and worked in restaurants in England and the USA! Hungry for information about the secluded spot, upon returning to my apartment, I set about finding out more about this photogenic part of Hong Kong I hitherto had only known as a location on a countryside map.

Thanks to the internet, I've discovered that Sham Chung's story is actually a rather sad one -- not only including the by now familiar New Territories tale of a once thriving even if physically isolated community that saw many of its sons (and daughters?) leaving to go and work in Chinese restaurants in the United Kingdom in the latter part of the 20th century but, also, a saga involving a ridiculous, ill-fated scheme to "develop" the area by doing such as draining its freshwater marsh and building a golf course (with the expectation that golfers would be attracted to a spot that, to date, is without road access!).

Considering the environmental damage done in recent times to the area, it's truly a wonder that the place actually has remained as physically attractive as it has. But sometimes nature really does have a rather miraculous way and ability to deal with -- and overcome -- what humans do to it. In any event, the sights and views that I beheld at Sham Chung earlier today struck me as pretty awesome. Alternatively put, they made for a pleasant surprise indeed -- and so much so that my visit to this hamlet definitely ranks as one of the highlights of the day's generally very enjoyable -- not least because it turned out to be rainless! -- hike. :)