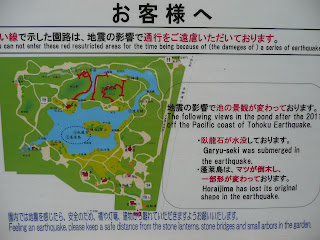 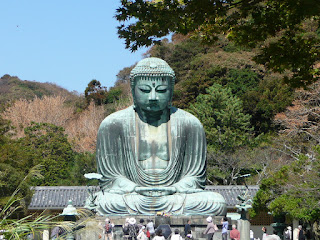 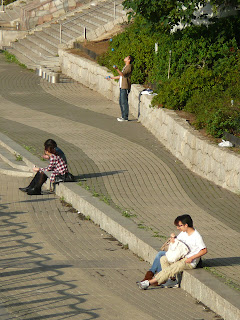 ..and signs of life and the ability to (still) enjoy,
appreciate and make good what the fates
have decided to bestow upon us
One year ago today, Japan suffered a terrible series of calamities. A major earthquake lasting 6 minutes and measuring 9.0 magnitude on the Richter scale is catastrophic enough on its own but it was preceded by a number of large foreshocks, followed by hundreds of aftershocks and was "only" one of 78 earthquakes that occurred on that one day alone. If this wasn't already disastrous enough, the largest earthquake to ever hit Japan also unleashed powerfully destructive tsunami and the tsunami, in turn, caused a number of nuclear accidents, including major damage -- including meltdowns at three reactors -- at the Fukushima Daiichi Nuclear Power Plant complex.

The damage numbers are staggering: 15,853 people dead, 3,282 people still missing and a financial costs and losses to the tune of 16.9 trillion (i.e., 16,900,000,000,000) yen. Then there's the unquantifiable amounts of psychic loss, grief, sorrow, fear, distrust and other negative emotions unleashed by the disastrous events.

Half a year after what has come to be known as the Japan 3/11 disaster, I decided to pay another visit to the East Asian country where I had already spent a number of great vacation days. One of my reasons for wanting to do so was to do my bit to help boost the country's economy and tourism industry. Another was that, purely and simply, I was pretty confident that a visit to Japan would result in yet more happy days and good memories of good times spent in a part of the world that some in other parts of the world view negatively for various reasons but I really do tend to predominantly associate with a lot of positive aspects and elements.

As anyone who has read my blog entries about that vacation (such as this one) will know, I did indeed have a great time. To be sure, there were times when I got to thinking about the events of March 31, 2011 -- including when I visited the Rikuguen Garden in Tokyo and saw signs of earthquake damage there, and on the last night of my vacation when a minor earthquake caused my regular hotel bed to momentarily feel like it had turned into a water bed. For the most part, however, I really was able to put thoughts of disaster out of my mind and focus on happier things and events.

Then there were the times when I was given reminders that Japan, whose society and culture is famous for finding beauty in the transient (such as cherry blossoms), also is a country that has proved remarkably resilient in the face of many, not just one, major disaster. For example, when visiting Kamakura, I of course went to see the Kamakura Daibutsu -- and when face to face with it, could not help but marvel at the sight of the 13th century bronze statue of the Buddha that has withstood a large storm that blew down the hall in which it was housed, a typhoon that destroyed another hall that had been built to shelter it, a tsunami that washed away yet another hall constructed to house it and survived an earthquake which destroyed its base but left its body undamaged.

Something that also left me feeling very touched was how it was that a number of Japanese people whom I met and got into conversations with while there seemed so uncommonly happy and grateful upon learning that I was a foreigner who had decided to holiday in Japan -- and by so doing, was effectively demonstrating my faith in their country. "Thank you for your support," more than one of them told me. To which I wanted to say in return, "Thank you for hosting me, Japan" -- and, more importantly, Nihon, gambatte kudasai!

Live goes on. We really need to appreciate everyday as if it's the last day on earth.

Gather ye rosebuds while ye may,
Seize the day? :b