A Chinese garden in southwest Lantau 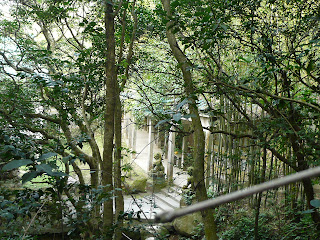 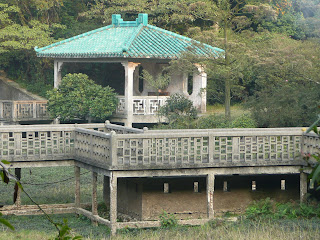 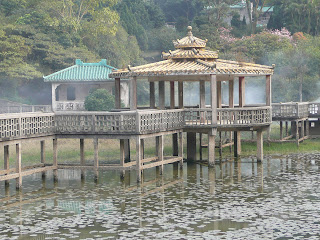 Although clearly in need of better maintenance,
there's (still) a romantic aura to the place
Less than a year after I moved to the Big Lychee, a friend living in Malaysia e-mailed and asked if I had seen everything there was to see in Hong Kong yet. As I recall, my response was a pretty emphatic "No way!" And I have to say that I still feel that way some years on -- even as I also do reckon that I have indeed gone about exploring quite a bit of the territory's nooks and crannies in my time as a resident of Hong Kong.

One reason for this is that the more one wanders about Hong Kong, the more one realizes that both its countryside as well as its more urban areas are home to many interesting sights and sites. In addition, reading books such as Jason Wordie's Streets: Exploring Hong Kong Island and Streets: Exploring Kowloon and/or checking out online resources like Martin Williams' Hong Kong Outdoors or Phil's Hidden Hong Kong (and Macau) gets on learning about and knowing to look out for still more interesting places, spots and locales in the territory.

Thus it was that prior research had told me that I'd be passing by a traditional Chinese landscaped garden when going along the same southwest Lantau hike which would sights of a flying dragon (statue). Even so, when I finally glimpsed this scenic spot that looked like it came out of a wuxia movie, it was quite a thrill to do so -- not least because Lung Tsai Ng Yuen really does appear to be such an improbable sight to come across after hours of trekking through kilometers and miles of uncultivated countryside!

More than one person (including as late as 2010) has written of having been lucky enough to find the gates to Lung Tsai Ng Yuen open when they passed by it -- and their consequently getting to go in and wander about the garden. I, alas, was not so fortunate. Even so, I saw enough from along Lantau Trail Section 5 -- and, even better, when standing on a small dam nearby -- to get a sense of how beautiful this former retreat in the Lantau hills still is after what looks like years of sad neglect and decay.

Is it too much, I wonder, to hope that this place will one day get restored to its former glory -- or, at the very least, regularly (re-)opened to the members of the public who would be able to walk safely on its zigzag bridge again? At the very least, I really do hope that Lung Tsai Ng Yuen will not suffer the fate of such as King Ying Lei Mansion or, even worse, Hong Kong's Tiger Balm Garden any time soon -- and, instead, remain a lovely sight for passersby to pause and admire for a few moments before going along their merry way once more.

What a wonderful Chinese garden in the "middle of nowhere". That it was closed and the bridges not sturdy enought to walk on adds to its romance. Nice photos too.

There definitely is a romantic feel to the place. I still wish it were open though -- I'd like to stroll in that garden!

I keep meaning to check out this place. Looks gorgeous.
from - http://landofnocheese.blogspot.com/

It'd be nice if you get to visit on a day when the gate to the garden's open. But even if not, you'll be able to appreciate the garden, I reckon.

P.S. Land of no cheese? You don't mean Hong Kong, do you?! Not when there's actually a pretty good selection at places like Greats and Oliver's -- and also "cheesy" restaurants like Classified, surely? :O

Haha, yes, it is HK. I should technically change the title to 'land of no indigenous cheese, they have stinky tofu instead' or perhaps 'land of overpriced imported cheese' but that would be a little pedantic.

Just saw your Sham Chung post - been there, on an equally damp day last year. Scenic indeed. The grass was just as lush and green!

Teehee re your alternative blog title ideas! And oooh re your having visited Sham Chung too. :)

It does look like a hidden (or forgotten) gem.

Not so hidden if you're on Lantau Trail Section 5 -- but that's a section that few people seem to hike on (especially compared to other sections of the Lantau Trail). :)