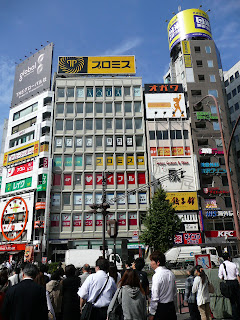 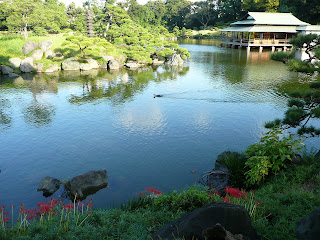 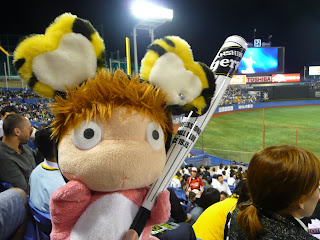 
A few months ago, I wrote a blog entry in which I mused about where I'd like to travel to for my next vacation. Even while I considered spending time in countries I have yet to visit (such as Vietnam or Italy), I eventually opted to return to a country I've visited a few times already (but had last been in in 2008).
More precisely, two Saturdays ago, I boarded a plane that took me to Tokyo's Narita Airport. And while I stayed every night of this most recent Japan vacation in Shinjuku, I ended up moving around quite a bit during my eight day stay -- not only in central Tokyo and the greater Tokyo area (that includes Koganei and Tana -- both described in Wikipedia as cities "located in Tokyo") but, also, UNESCO World Heritage-listed Nikko, Kamakura (which may join the likes of Nikko, the Great Wall of China and Cologne Cathedral on the list within the next couple of years) and Kawagoe.
With my pedometer registering that I had walked more than 15,000 steps a day (and often more than 20,000 steps, actually!), I think it's safe to say that I covered quite a bit of ground this recent Japanese vacation. And what with the weather turning out great for the most part (complete with plentiful bright blue sky sightings, dry days and pleasantly cool temperatures), I happily spent a large proportion of time outdoors doing such as strolling about traditional Japanese gardens (like Rikiguen and Kiyosumi Gardens) and checking out the Edo Open Air Architectural Museum located not too far away from Mitaka (which has a number of Studio Ghibli associations, including the museum's mascot having been created by Hayao Miyazaki) as well making pilgrimages to various Buddhist temples and Shinto shrines located in expansive grounds.
Perhaps it was just as well that I did a lot of walking -- and effectively exercising -- on this recent Japan vacation since I also did quite a bit of eating and drinking during it! Almost needless to say, I re-visited Sushi Dai -- where I had my best meal of 2006 -- one morning. And I have to say this past week, I also had my best tempura (with batter so light and ungreasy-feeling over a variety of ingredients including prawn, fish, eggplant and onion) and soba (the kind that's freshly handmade and made purely from buckwheat) meals ever.
Something else I think worth sharing is that I once more found the kindness and courtesy of strangers to be a major factor in making my time in Japan really enjoyable. Among these often truly disarmingly nice folks were the volunteer guide who gave me a personalized tour -- for free! -- of Asakusa last Sunday (which just happened to have been my birthday), the senior citizen volunteer docents at the Edo Open Air Architectural Museum who -- after getting over the shock of realizing that I wasn't Japanese (and couldn't speak Japanese) -- enthusiastically engaged me in conversation as well as gamely made their best attempts to explain details about the exhibits that weren't on the English parts of the exhibit labels and museum brochure, and the woman at an out-of-the-way shrine in Kamakura who went about sharing her refreshing ice cold green tea with fellow visitors.
I additionally was fortunate to have a friend living in Tokyo to spend three evenings and one Saturday with; not least because some of the activities we partook of together -- like going to izakayas and a baseball game -- are more fun when done in good company rather than on one's own. (More than incidentally, I first got to know this friend by way of her being sbk's daughter and she used to introduce me to people as "my mom's friend" but these days, I think we can say we are friends in our own right!)
In short: I reckon I managed to fit in a lot of fun times on my most recent holiday -- and there's much I want to share about it by way of photos and writings. So, just as my blog turned Germany-focused for a few weeks in the wake of my 2010 German vacation and Korea-centric for a few weeks after my 2009 South Korean vacation, my focus will be on Japan for the next couple of weeks or so. And who knows, maybe after checking out these entries, you yourself will feel inspired to yokoso (i.e., visit) the Land of the Rising Sun! :)

Welcome back YTSL. I have heard that the Japanese are great with tourists but this sounds even more encouraging--especially since I often travel alone. I am looking forward to hearing more about your trip.

Your photos seem to capture the various Japans so well. The city...the spiritual garden... the cuteness.

I have a friend who runs a yoga studio in Kamakura if you are there for any extended time and interested. It's called Tao Yoga.

Thanks -- and yes, be encouraged. Japan is very doable for the single (female) traveler! :)

Glad you like the photos -- and yes, there are more of them to come.

Re Kamakura: I was only there for a day, alas. It seems like it'd be a nice place to live in. Would definitely like to go back -- not for yoga, mind, but, rather, more temple and shrine touring! :b

Lovely post--and Ponyo looks very nice with tiger ears! Always nice to see him in the foreground of some of your pictures when he tags along with you.

Glad you're back and I look forward to reading about your trip.

Love Ponyo at the baseball game. Did she accompany you to Japan or did you find her there?

This is a delighful post to read. And I'm happy that more is on the way :)

Glad that people helped you out.

When I was in Japan people run away from me rather than talk to me - I'm not kidding. And I often got help from other caucasians. The only Japanese people who actually helped me out were two salarymen who were kind enough to spend their lunch hour hunting down the Katana Museum with the gaijin.

But it is definitely safe and people are very very polite and the food is really yummy (although I have to say I was craving cheese, olives, tomatoes, bread and fruit after two weeks there)

Have to say that part of me wishes I were still on holiday in Japan...
but putting up blog entries of the vacation helps prolong it in a way. ;)

Re Puppet Ponyo: she may have originally come from Japan but she's now Hong Kong based usually and thus was on the same Hong Kong-Narita flight as me. ;b

Goodness re your Japanese experience! I've heard that many Japanese are really shy about speaking English (though more can than one might think -- and can speak better English than *they* think!). So guess that they ran away from you to avoid having to speak in English.

The thing with me is that I am usually mistaken for a Japanese person by Japanese people -- and especially in Japan. So by the time they find out I'm a foreigner, it's kind of too late to avoid conversing with me! ;D