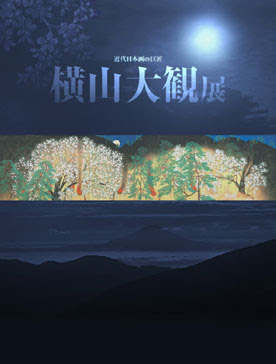 From the heavenly
(The front of the catalogue of the museum exhibition
which makes my 2006 highlights list)... 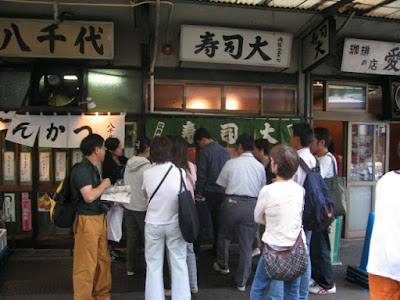 ...to earthly delights
(Expect to have to wait for a bit before getting into
the eatery where I had my best breakfast of 2006)

Before anything else: yes, the following is my attempt at a "Best of 2006" list. And yes, I'd imagine that it's probably more eclectic than most. (In other words: Like this blog in general, it doesn't stick to a single subject). And should you wonder: no, I really didn't outright plan for it to be this way. But as I got to thinking -- and trying to remember what I can -- about this year that soon will draw to a close, especially its good bits, I found my mind tending to want to roam all over the place and calling up this particular collection of diverse fond memories that I figure would be worth noting down:-

1) Best book: Former New York Times food critic Ruth Reichl's Garlic and Sapphires: The Secret Life of a Critic in Disguise (Penguin Books, 2006). More than just "food porn" (though there's most certainly plenty of that to be had within its pages!), this tome that got me wishing I could be as good a writer as its author also contains thought-provoking reflections on such as how, in putting on various physical disguises, she not only outwardly changed personalities but caused different inner-selves to emerge. Still, there's no hiding that there's plenty of descriptions of epicurean feasts in there which got me salivating and, worse, my stomach growling!

2) Best breakfast (heck, meal, period!): The 3,800 Yen (~US$32 or RM113) omakase (trans., "entrusts" ; but in culinary terms, think of it as"chef's choice" -- i.e., the customer leaves it up to the chef to pick the selection he considers to be the best) sushi breakfast I had at Sushi Dai, widely touted as the best sushi-ya (trans., specialist sushi eatery) in Tokyo's famous Tsukiji Fish Market, was worth every single Yen that it cost. A tip for those who plan to follow in my footsteps: Make sure you get there as early as you can; and not necessarily to beat the crowds but, rather, in order to get the really fresh seafood that makes up such a major plus integral part of the sushi meal! :b

3) Best Fear Factor-type experience: The canopy walk at Taman Negara, Malaysia's oldest national park, has one walking 25 to 40 meters above ground (i.e., at tree-top level) for 450 meters along a series of rope-and-plank bridges that sway from right to left and back again with every step that you take! Although it may seem like so to those with a fear of heights, I personally found the experience to be way more fun and less frightening than one might think that it would be!! :)

4) Best film: Whoooh. You know this one was difficult to name (since I did watch quite a number of movies this year)! So I'm going to cheat a little and divide this category into Hong Kong and non-Hong Kong sections. Anyways, for my choice of Hong Kong movie, I'm going to go all the way back to 1972 for The 14 Amazons while the film that gets my vote as the best non-Hong Kong movie I viewed this year is Always -- Sunset on Third Street (Japan, 2005).

5) Best film festival: Granted that the 2006 Hong Kong International Film Festival was the one film festival I attended this year which -- unlike the so-called film festivals which are held over here in Malaysia -- really was true to its name. However, when its non-film viewing highlights alone included such as a Mobius Home Video Forum Asian Cinema Discussion Board get-together at a local microbrew pub, my getting to mingle with luminaries like Johnnie To, Wai Ka-Fai, Shu Kei and David Bordwell at a book launch and one's finding oneself seated in the same row and just a few seats away from Michelle Yeoh at the screening of influential filmmaker Patrick Tam's Nomad... (N.B. For those who missed it: I've already written about my 2006 HKIFF viewing experiences over at Hong Kong Cinema: View from the Brooklyn Bridge.)

6) Best museum: The Studio Ghibli Museum in Mitaka, Japan. An absolute "must go and see" for fans of the works of -- and people behind -- Studio Ghibli but also anyone who would like to see and experience an example par excellence of a well-designed and -constructed, child-friendly and fun but also educational plus enlightening museological institution.

7) Best museum exhibition: The multi-room as well as -piece Yokoyama Taikan exhibition which ran from 30th July to 3rd September at the Fukuoka Art Museum. No matter that the exhibition notes and audio commentary services were only available in Japanese. Just one look at the absolutely stunning masterpieces on display and even someone with as little knowledge of Japanese art as myself knew that I had fortuitously stumbled onto a comprehensive retrospective of the works of one of Japanese art's grand masters.

8) Best sporting experience: Real Madrid 0, Arsenal 1. Yes, sad but true: the best sporting experience of 2006 for me was not one which saw me out on a playing field but, rather, watching other people in sporting action; and not even live in the flesh but only "live" on television. Still, such is the power of sports -- as well as television -- that watching Arsenal beat Real Madrid in an UEFA Champions League match at the Spanish club's magnificent Bernabeu Stadium home by way of an inspired Thierry Henry goal made for an experience that filled me with great joy at the close but also had me almost expiring from tension at times during the game itself!

9) Best "the world is my oyster" day: AKA the day back in April during which a travel companion and I made extensive use of Hong Kong's multitude of fantastic public transportation options. More specifically, our itinerary that day had us starting out by taking a train from the Jordan MTR station to the last stop on the Tsuen Wan line, then a minibus from near the Tsuen Wan MTR station to the Yuen Yuen Institute and another back into town a couple of hours later, and a third across to Kennedy Town over on Hong Kong Island, then a tram to Central, followed by a train from the Central MTR station back to Jordan. As such, over the course of a single day, not only had we set foot on Hong Kong Island as well as in Kowloon and the New Territories but we also been on two trains which, taken together, had stopped at every single station along the MTR's Tsuen Wan line!

10) Best walking tour: I must admit to having been tempted to immodestly name one of the tours around George Town's "inner city" which I've taken people -- including fellow Penangites as well as visitors from Australia and elsewhere -- on as the winner of this category! (Note to my readers: Feel free to let me should you ever head over to Penang and seek to engage a guide for either a food or heritage tour... ;) )

However, I've decided to go ahead and give some much deserved credit to the affable Mr. Joao Novikoff Sales of the extremely welcoming Macau Government Tourist Office who took me on a walking tour of the historic center of Macau, an area that's deservedly on the UNESCO World Heritage Committee's highly prestigious World Heritage List. (And more than by the way, I'm not doing this just because Joao turned out to be a fellow Gooner either! ;b)
Posted by YTSL at 5:28 PM

It sounds like you had some amazing experiences--food, books, movies, art, travel and more. So many wonders for one small year. Thank you for sharing them!

Something I resolved to do early on with regards to this blog is to have it remind me of good experiences of my life. Writing this particular entry, I got to realizing that 2006, a year which I actually had thought wasn't all that great for me, actually does have its share of high points...and what's the icing on this particular cake is that people like you would actually go out and thank me for sharing my accounts of them. :)

i´ve just read your real madrid-moment! i live in Madrid but i´m F.C. Barcelona´s supporter and it was a great moment for me too!!! i love your blog!!
besos desde Madrid!

Thanks for loving my blog. :)

Also, I think that you'll be in agreement with me when I say: Viva Cesc Fabregas! :b