The modern and traditional (in Japan) in a single photo 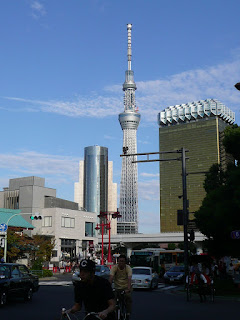 Spotted in Asakusa: the towering Tokyo Sky Tree
(which will only be completed in 2012) and,
among other things, a rickshaw on the street along
with more regular vehicles like cars and bicycles

On another cultural note: on this most recent visit to Japan, I saw lots of bicycles and bicyclists about. Although two recent books I've read about Japan involved a woman touring Japan by bicycle, I hadn't really associated the country with bicycles and bicyclists -- this not least since the two travel tomes in question (A Ride in the Neon Sun: A Gaijin in Japan and The Sun in My Eyes: Two-Wheeling East) were written by a British rather than Japanese woman (Josie Dew is her name).

So... can anyone enlighten me as to whether bicycles have become an increasingly favored vehicular option in Japan in a bid to help conserve energy post the March 11 disasters? If not told otherwise, I am suspecting so -- especially in the context of my not having noticed that many bicycles and bicyclists during my previous visits to the country and, also, my noticing on this most recent visit other energy-saving measures in effect including the highway stretching between Narita Airport and central Tokyo not being so well lit these days.

On my first visit to my daughter in Tokyo at least 4 years ago I was surprised at the number of bicycles in Tokyo.

Many train stations in more surburban Tokyo have a fairly good size area for bike parking for their commuters.

The other bike thing that surprised me was that in some main shopping streets in different neighborhoods of Tokyo (Kita-Shinjuku for one) bikes are ridden on the sidewalk along with the walking pedestrians. The main streets are quite busy with cars, trucks and buses. Women taking younger children to school, student age kids and even some older men....all riding bikes on the sidewalks. I did get used to the tinkling of the bike bells after a few days. The sidewalk bike reders are quite adept at riding in between and around walkers.

Thinking back to my previous visit to Tokyo in 2006, I did encounter bicycles -- and, yes, on the sidewalk! -- in Mitaka on my walk to and back from the Studio Ghibli Museum.

For some reason, however, it just seemed like I saw more bicycle and bicyclists -- and more frequently -- including in various suburban and urban parts of Tokyo and, also, Kamakura.

And, yes, I saw quite a few bicycles parked next to train stations -- including Shinjuku's. :)