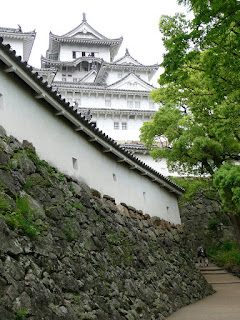 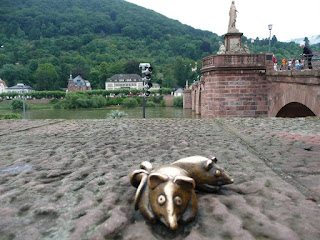 View of Heidelberg -- a picturesque town in country (Germany)
which I can enter without applying in advance for a travel visa
"Where in the world do you want to holiday next?" This is a question I've been asked more than once in recent weeks -- partly because the past couple of weekends have been long weekends for many in the Big Lychee -- courtesy of Hong Kong's public holidays this year including Good Friday (April 22nd this year), the following Saturday, Easter Sunday (April 24th), and the Monday after Easter, May Day (May 1st) and the day after May Day (May 2nd) -- during which many a person I known has flown off for a short vacation.

My reply has honestly been: "I don't know yet". But I'll also admit that I've been considering going on a Scandinavian cruise for the first time ever this year or visiting Venice (not least because of the beautiful photos of the place that can be found in blogs such as Churches in Venice and Trekcapri's) or Vietnam... or returning for another visit to Japan -- only with the latter there remains the bureaucratic hurdle of applying for a visa; something which I won't have to do should I wish to travel to the other destinations I've been thinking of doing.

If the information on Wikipedia is to be believed, a Malaysian passport is ranked pretty high (i.e., number 13 in the world) in terms of travel freedom and visa-free access. And it's true enough that there have been times and places in the world where I've been happy to have had a Malaysian passport -- including when living and travelling in Africa, where I found that Malaysia being a part of the British Commonwealth made it so that I did not need a visa to visit Tanzania (except that I also successfully applied to be a resident of Tanzania proper and also Zanzibar in order to work and live there for two years), Kenya, Zimbabwe and Zambia (on account of those African countries being fellow members of the British Commonwealth).

Incidentally, I have often recounted the -- in retrospect -- funny experience of how it was that I literally walked across the Zimbabwean-Zambian border by way of the bridge that crosses the Zambezi River close to Victoria Falls because I wanted to see the amazing natural phenomenon from both countries -- and, at the border, when asked by the Zambian immigration official how long I intended to stay in his country, miffed him somewhat by honestly telling him that I just wanted to stay long enough to view Victoria Falls from the Zambian as well as Zimbabwean sides! (Fortunately, the guy wasn't upset enough to deny me entry into his country -- and I spent only a few hours in Zambia before walking back to Zimbabwe later that same day!!)

In contrast, I would not be able to walk across the border between Hong Kong and Mainland China without first acquiring a China visa -- something which I actually don't possess at the current time -- and, in fact, only have applied for once... years ago when I went on holiday to Beijing with my mother! (And for the record: for all of my having now lived in Hong Kong for more than four years, I still have paid a single visit to neighboring Shenzhen...)

On another ironic note: I also require a visa to visit the U.S.A., a country where I lived, studied and worked for close to one and half decades of my life. (Again for the record: I never did apply for a green card, never mind citizenship -- not least because, as I told many a (then) disbelieving American friend, I actually didn't think I would want to spend the rest of my life in that country and would want to leave it one day...)

All this I actually don't mind too much. On the other hand, it's true enough that I wish that Malaysians didn't require a visa to visit Japan. And if that were the case, I definitely would travel to the Land of the Rising Sun more often -- to sample its food and other attractions that I really wish I could conveniently avail myself of... though even with the visa requirements, I do plan to pay visits to such places as Nikko, Kamakura and Shikoku some day soon (as well as already have had the pleasure of visiting such destinations as Mount Aso, Dazaifu and Himeji along with the cities of Tokyo, Kyoto, Osaka, Sapporo, etc., etc.!)

I will pick up my Chinese visa today for my trip which begins Monday to the Chinese mainland. It just baffles me that I have to send my visa from Honolulu to Los Angeles for processing. No consulate here. (Although we do have a Hungarian one.) As if there isn't plenty of China-Hawaii travel, and lots of Chinese people here with connections to the motherland. And we still can't get a direct flight to Beijing, Shanghai or Hong Kong.

But it's not stopping me. Happy traveling to you, wherever you go.

I'm in my mid 30's and still don't have a passport! My future in-laws mention it every chance they get. What are they getting at? =D

Hi YTSL, Thanks so much for mentioning my blog next to Annie's. Definitely Annie's blog is a great place for beautiful photos and really interesting history and helpful information on Venice. I, too, would totally read her blog before my next trip to Venice as I would yours if I have the opportunity to visit Hong Kong. You are both a wealth of information, interesting background stories and beautiful photos.

I did not know that about a Malaysian passport. It is very intersting your story about your quick visit to see the Victoria falls. I would love to visit there someday too. I find it very interesting to hear about how travelers decide where to next? I enjoyed reading your posts when you went to Germany. And I look forward to reading more about your thoughts on your next destination. I wonder if it will be Venice . . .

Bon voyage re your upcoming China trip. A question: do you know how many Chinese consulates there are in the U.S. and where they are? Have a feeling that there's not that many... at the same time, it did surprise me to learn that there's no direct flight between Honololu and Beiing, Shanghai *and* Hong Kong!

Wow... you mean you've never travelled outside of the US? I know that's the case for many Americans but, frankly, had got the impression that you were more cosmopolitan/international than many of your fellow countrymen and -women! :O

Thanks for your comments -- and I'm glad you enjoy reading my blog posts on Germany as well as Hong Kong. :)

Re Venice: up until seeing you and Annie's photos, had had this idea that it was a super crowded, tourist-infested place... but some of your pics show what appears to be ultra-charming, quiet parts of the city -- parts that look very attractive to me. :)

I know??? the only 'out of country' destination I have been to is Canada. But that really isn't so much out of country. Not even to a Caribbean island?!

I hope to attain a passport soon as we hope to Honeymoon in either HK, Taiwan, or the mainland. or all 3!=)

Didn't you need a passport to get to Canada?? And congrats on the news re your impending marriage and honeymoon! :)

Yeah, you do need a passport now to enter Canada. I haven't been there in years, long before they implemented the passport law. Out of curiosity, would you know how much a passport costs in HK? they run about $135 in the states.

A passport in Hong Kong for what nationality? (FYI, I got my latest passport at the Malaysian consulate here in Hong Kong...) In any case, have to admit that I don't know the answer off the top of my head. ;S