I'm baack! To be precise, I've returned from an all too short Korean vacation that, among other things, saw me actually on the North Korean side of the border for a few seconds as well as visiting three UNESCO world heritage sites in two days and going on a stroll along the banks of the restored Cheonggyecheon stream.

Over the course of just a few days, I came across many beautiful, interesting and downright amazing sights -- so much so that I ended up literally taking hundreds of photos. The following eight will hopefully give you a taste of what I've seen and where I've been this past week -- and also whet your appetite to view more of my Korean shots (because, ready or not, I do plan to put up quite a few more on this blog before too long!):- 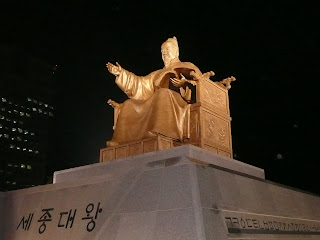 I got the feeling that this vacation would be
a good one after I serendipitously came across
this newly built statue of King Sejong
while out strolling on my first evening in Korea! 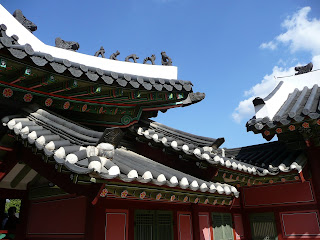 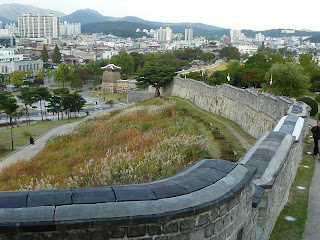 As impressive as Hwaseong Haenggung may be,
it actually isn't Suwon's major attraction --
rather, that honor goes to the Hwaseong Fortress
on whose close-to-6 kilometers long walls I walked 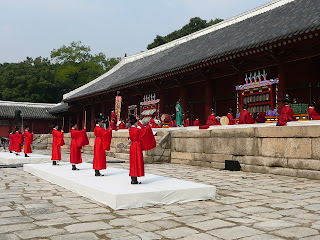 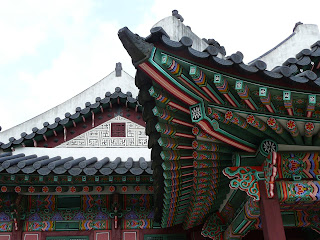 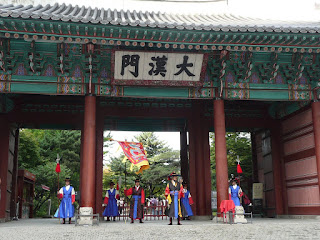 Colorfully costumed sentries at Daehanmun,
the main gate of Deoksugung (a palace
whose walls I regularly passed by on such as
walks from my hotel to a nearby subway station!) 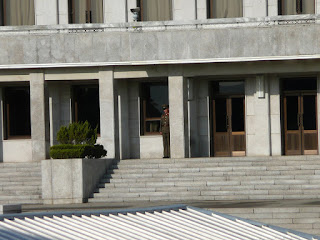 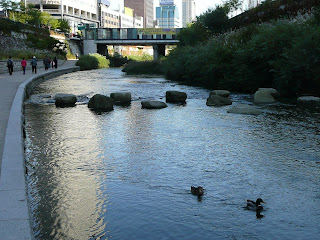 Terrific images--you have a great eye for detail. I love the shots of the palaces particularly Hwaseong Haenggung. "Temporary" in this case must have meant that the king would only be in residence occasionally not that they were temporary structures.

Looking forward to the next batch of photos.

wow! nice vacation, s.korea seems to be a very popular destination in these 10 yrs!

Awesome vacation I reckon! Love your pix... more to come?

Thanks for checking out my photos. And yes, you're spot on re the meaning of "temporary" in the case of Hwaseong Haenggung. :)

Is South Korea a popular destination in the past 10 years? Must say that it thankfully doesn't seem over-run by tourists just yet! :)

Yes, a really awesome vacation. And yes too re there being more pictures to come! :b

I'm glad you weren't arrested by taking photos of guards. :)

If these photos are just a taster of what's to come, we're in for some treats! These are places that I can only dream about. Looking forward to more. :)

City Walls are fun and I enjoy walking them too. In China I've walked Nanjing's walls which are broken up and Xian's.

Do you plan to show us on your blog all the photos you took? If not would you consider putting some on Flickr or another online photo place? I'm the one who never tires of people's trip photos.

Thanks to the wonders of zoom lens, the North Korean guard was actually pretty far away from me! But, thanks for your enthusiastic response to my first set of Korean photos -- and it has encouraged me to think that people would like to see more of them. :)

Yes, definitely will post more photos but *not* all my photos -- on this blog or any other place. For one thing, there just are too many! For another, I still haven't figured out how to deal with Flickr, etc. ;S