And so it goes: not just The Guardian's coverage of Japan in its Travel section (see here, here and here) but also my own over on this blog... After devoting much of the previous day to visiting sacred spaces in Nikko (and the day before that checking out Asakusa's Sensoji Temple), I decided I needed a bit of a break from visiting temples, shrines and associated places. Alternatively, my visit to Nikko's Tamozawa Imperial Villa left me eager to view more old Japanese buildings.

So after a super fresh and filling sushi breakfast at Sushi Dai, I made my way to the Edo-Tokyo Open-Air Architectural Museum located out in a part of Tokyo's western suburbs known as Koganei. My copy of The Rough Guide to Japan intriguingly described this museum as "a kind of retirement home for old Tokyo buildings" but what got me really wanting to pay a visit to the place was a line in the guidebook about "the museum [having been] the inspiration for the abandoned theme park in Studio Ghibli's Oscar-winning Spirited Away".

After spending time at this very cool museum, I definitely can see its influence on that film. In addition, a charming elderly volunteer docent told me that the Studio Ghibli is headquartered in Koganei, its staff regularly visit the Edo-Tokyo Open-Air Architectural Museum, and the museological institution's green caterpillar mascot character, Edomaru, was drawn by none other than Hayao Miyazaki! 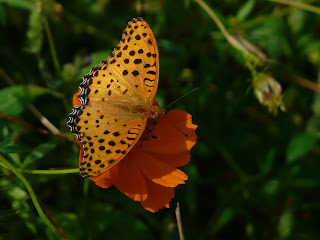 Spotted while walking through Koganei Koen
to the museum -- a pretty, yellow-orangey
Japanese butterfly atop a definitely orange flower 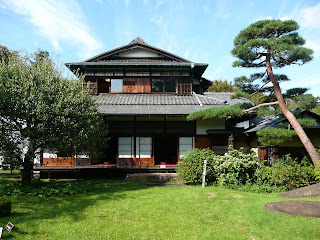 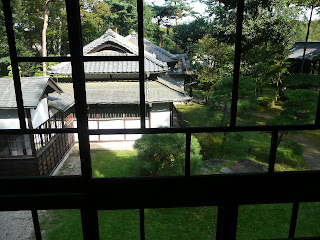 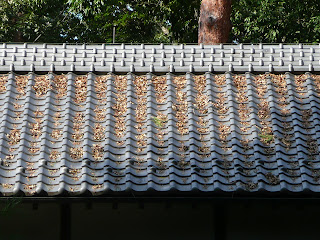 The fallen leaves on the tiled roof top
make for a pretty picture, I reckon! :) 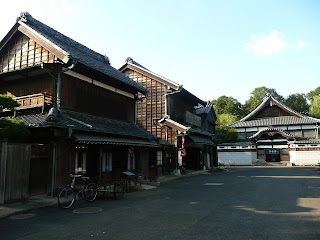 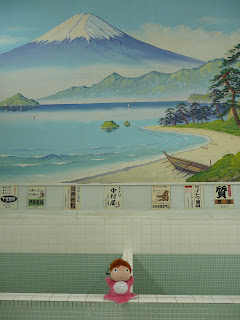 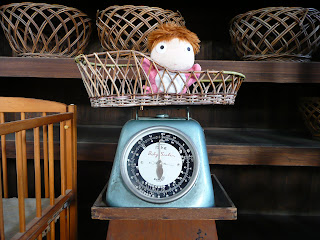 Another photo of Puppet Ponyo -- this time
atop the bath house's baby (weighing) scales
looking a bit anxious at the possibility that
she could weigh anywhere close to 15 kilograms ;D

Perhap I missed something before, but who is Puppet Ponyo? Your traveling gnome?

Eeeeeeeee -- *faint*. You didn't know? Puppet Ponyo is my traveling puppet version of the lead character in Hayao Miyazaki's "Ponyo on the Cliff by the Sea".

Great photo essay. Love, love , love the photos with Ponyo in them! Plus a new place for me to visit on a future trip to Tokyo.

Am very glad that you love the photo-essay (that includes photoS of my beloved Puppet Ponyo). :)

Haven't see the Ponyo movie, but will add it to my list. I only know Totoro, Spirited Away, and Howl's Flying Castle...and I think, Kiki's Delivery Service. Something to add to my queue!

Ask a stupid question and you get a brilliant answer! Next time I travel, I'll take my Catbus (if not my Totoro backpack!).

Re the Ponyo movie: try to watch the Japanese dub version. The English dub one sounds like it could be pretty awful!

Also, can I also recommend "Porco Rosso" and "Nausicaa of the Valley of the Winds" from the Studio Ghibli movies you've yet to watch? :)

Love the architechtures of these buildings. Good story :)

Am glad you like the photo-essay -- words as well as photos. :)