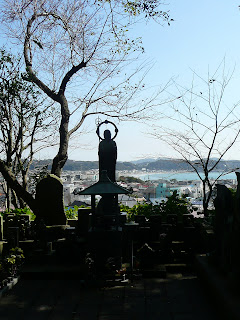 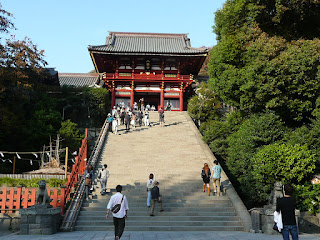 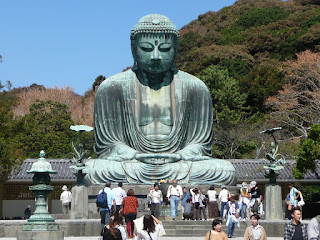 On the 6th day of my recent Japan trip, I went to Kamakura. Located some 50 kilometers southwest of Tokyo, this small city that's filled with shrines and temples makes for a very pleasant day trip from the Japanese capital -- and I'd go as far as to state that I much preferred visiting it than the apparently more highly thought of Nikko.

Although I only managed to visit five of Kamakura's 65 Buddhist temples and 19 Shinto shrines, I felt I did good for a day -- and enjoyed my day out there so much that I consider it to be one of the high points of my recent Japan vacation.

For the record, the five holy places I managed to go to in that former de facto capital of Japan were the "big three" Kamakura sites of the Hase Kannon Temple (AKA Hasedera), Hachimangu Shrine (AKA Tsurugaoka Hachimangu) and the Kotokuin Temple area that is home to the Daibatsu (i.e., the Great Buddha of Kamakura -- which originally was located inside a temple hall but now is open to the elements, having withstood typhoons and a tsunami even when the temple buildings didn't), and -- via a hiking trail -- a couple of small but interesting and more out-of-the-way Shinto shrines in the Sasuki Inari Jinja and Zeniarai Benten Shrine.

More than incidentally, I don't think it's coincidence that all the sacred places I visited were located on relatively high ground (cf this Photo Hunt entry's top most photo taken in the grounds of the Hase Kannon Temple) and also often required going up a number of steps to get to their main areas (as can be seen in the middle photo taken at Hachimangu Shrine). Perhaps it's thought that one will be more likely to have high minded thoughts when one is up in elevated spaces? Alternatively, it often felt like one was being made to feel some strain and sacrifice while making one's pilgrimage to those sacred places. Alternatively put: no (physical) pain, no (spiritual) gain! ;D

A fascinating trip and great pictures/links. I like the elevation for photographic reasons, but don't like so many steps myself!

And yes, a bit of editing was done on my part, just for fun!
Happy weekend.
high

It must be a very interesting country to visit ! this buddha is enormous !! People look like ants !

what an amazing journey you made! i can't imagine how much time one would need to visit all 65 temples and 19 shrines.:p 5 temples in a day is an accomplishment, especially when one has to climb and walk.:p

65 temples, that is a lot of temples. Did you go to the more famous ones?

When faced with the steps, I'd just tell myself "You're going to get a great view from up there..." ;b

Japan is indeed a very interesting country to visit. Re the Great Buddha: actually, I was surprised that it was not bigger -- because the Ngong Ping Big Buddha in Hong Kong's bigger!

Not sure about the time to see ALL of its temples and shrines -- and also that I'd want to do so -- but yeah, I must say that Kamakura is one of those places I've visited that I'd like to return to at some point.

Er yeah, the ones I highlighted in this Photo Hunt entry are indeed considered the top three religious places to visit in Kamakura.

HI YTSL, these are lovely photos. It looks like a beautiful location. Your comments at the end was very thought provoking for me. It's interesting because when a group of us climbed the half dome in Yosemite (not a spirtual place), the effort and climb up to get there, one couldn't help but be spiritually uplifed by the achievement, by the beauty, by the elevated vantage point...hard to explain but you say it so well. Thanks for another interesting read.

Looks like a fun and interesting place to visit :) Would love a chance to go there someday, such a spiritual place :)

Fascinating, and lovely photos too.

Looks like a wonderful trip. Very interesting place to visit and I love the photographs you took. Great shots and post for the theme.

Thanks for sharing your Japan trip. That Buddha is amazing!

There are over 500 street shrines in Venice, BTW. So much fun to look for them.

Thanks so much for your comments. Really appreciate them. And wow and congrats re your climbing up the half dome in Yosemite! :)

Kamakura really did endear itself to me. More than BTW, am planning more Kamakura blog entries -- including a photo-essay -- for next week. :)

Thanks as ever for reading as well as looking and visiting. :)

Venice and Japan really does seem to be very much into shrines, huh? ;b

I think 5 in one day is really a good number. I'm sure you'd want to spend time in each shrine before moving on to another.

It looks like a great holiday. Great take on the theme!

I would love to visit here someday and see these sights for myself. It looks beautiful.

What an amazing place! Love the photos!

Such wonders. Someone would sure get there exercise (2nd picture) going up and down the steps.

There were two other shrines in Kamakura that I'd love to have seen -- but, yeah, 5 is I think an okay number. And to be honest, was close to flagging at number 5 as it turned out! (All those steps...!)

Hope you get your wish and visit Kamakura some day. :)

Glad you like the photos -- and that they give you some idea of how cool Kamakura is. :)

Re the second photo: the approach for that shrine is on the lengthy side too. So, ya, quite a walk!

glad you had a pleasant trip. nice photos and i enjoyed your prior posts and photos on Japan as well. thanks for sharing.

Glad you like my Japan postS. Thanks for looking at more than just my Photo Hunt entry for this week. :)