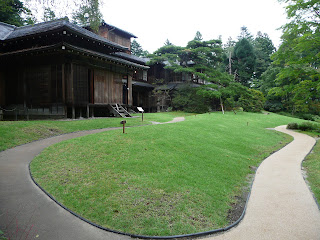 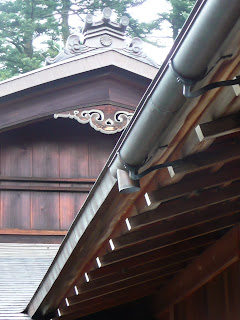 Although no where one tenth as decoratively
elaborate as the Toshugu Shrine, the villa still
is not without its own ornamental touches 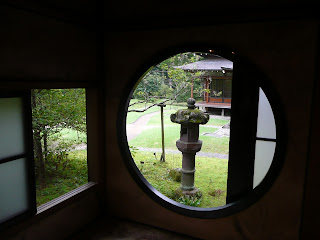 Nestled amidst landscaped beauty, many of its
windows (be they round, square or rectangular)
offer up aesthetically pleasing views
For many people, Nikko's sacred spaces are about all that they see of the place. Some others (mainly Japanese visitors, I'm getting the sense) also make it a point to check out natural attractions like the Kegon and Ryuzu Waterfalls and Lake Chuzenji. Should I ever venture again to that part of Japan, I'd definitely want to see those natural sights.

On my maiden trip to the area, however, I opted to focus on Nikko's cultural attractions. And after visiting the "big four" attractions of Rinnoji Temple, Toshugu Shrine, Futarasan Shrine and Taiyuin Mausoleum and realizing that I still had time to check out another place before catching the last train out of Nikko back to Tokyo on Tobu Railway's World Heritage Pass, I decided to make my way to the Tamozawa Imperial Villa.

Occupied by three emperors and three princes between the years 1899 and 1947, this 107-room residence is one of the largest wooden buildings in Japan. Originally the Tokyo residence of a branch of the Tokugawa clan, its central core was constructed in 1632. With changes and expansions in the intervening year, the overall building now is a blend of Edo and Meiji Period architecture that seems harmonious as well as pleasing to my admittedly untrained eyes.

One reason why I was motivated to pay a visit to the Tamozawa Imperial Villa is that it appears at the top of Frommer's Japan's The Best Castles, Palaces and Historic Homes list. If truth be told, however, I reckon that the only other place I've visited that's on the list -- Himeji Castle -- is a good deal far more impressive and beautiful as well as plain larger and filled with lots more interesting nooks and crannies to explore.

To be fair though, it may be a case of comparing apples and oranges since one is an imperial villa and the other a (non-imperial) castle. Also, Frommer's Japan's authors (Beth Reiber -- who also wrote Frommer's Hong Kong, an old copy of which I still like referring to every once in a while -- and Janie Spencer) may well have awarded the Tamozawa Imperial Villa extra points on account of it being the only imperial villa that doesn't require a reservation to visit.

In any case, I did like that it is one of those Nikko attractions that, for one reason or other, looks to have remained off the well-beaten path -- with the result that one frequently finds oneself alone in a room (or whole entire section of the villa) and also granted quite a large portion of solitude when venturing about the part of the large memorial park surrounding the residence! :)

The Imperial Villa has some lovely touches--for example, even the structural metal forms holding up the gutters in the second picture have pleasing curves. While the gorgeous woodwork is the real draw, I am also impressed with small touches like that.

Wandering through the rooms and gardens by yourself must have been delightful. The villa looks like a serene, very peaceful place and just right for solitary contemplation--or just daydreaming.

Something to add to the "small touches" the borders of the tatami mats on the floor were of patterned silk. Visitors to the villa are asked to make sure they don't step on those silk borders. :)