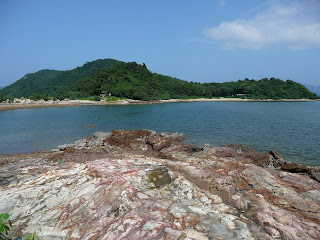 Another beautiful day for hiking in Hong Kong...
even if one that admittedly was on the hot side! 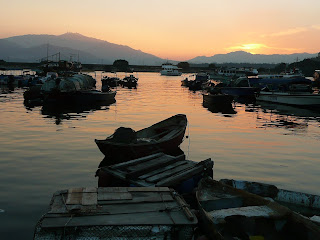 What a great weekend it has been (a shock Arsenal home loss notwithstanding)! And I say this not only because it's my birthday weekend but, rather, because so many of the wonderful experiences I hadn't been especially planned to celebrate my birthday. Put another way: many of the activities I undertook this weekend are ones I regularly undertake on weekends in Hong Kong. (Hence my often regularly telling people that I live for weekends here in the Big Lychee!)

Indeed, my weekend celebrations this weekend actually began in earnest later than normal since, rather than take in a show or movie (or meet up with a friend or more for dinner at a restaurant) on Friday after work, I opted to spend a quiet evening at home. And I was actually still slowly waking up when a friend phoned late on Saturday morning to suggest that we have lunch together.

Nonetheless, I still ended up having time to not only have a leisurely as well as delicious lunch on Saturday but also check out a fun exhibition featuring the works of Liu Bolin at the Galerie du Monde in Central and, in the evening, take in a City Chamber Orchestra of Hong Kong concert whose featured soloist was the amazing virtuoso percussionist, Dame Evelyn Glennie (whose two solo encores were simply jaw-droppingly incredible). And although I went to bed last night thinking the concert would be the highlight of this weekend, I went on a hike earlier today in the North East New Territories that may well top the experience of hearing Dame Evelyn Glennie doing such as coaxing ethereal sounds out of a vibraphone that got me thinking of pipe organ music in a cathedral...

Since the Ma Shi Chau Nature Trail only officially begins after one walks across the tombolo connecting Ma Shi Chau to Yim Tsin Tsai, one has to actually do some trekking (official estimates are half an hour but what with the many stops to take photos and such, my regular hiking companion and I took closer to an hour) to get there from the nearest bus or green minibus stop to that designated Special Area of Hong Kong. But no big deal -- especially because that pre-nature trail trek turned out to be through some really interesting locales, including a fishing village and up a hill that afforded scenic views galore.

Then after we finally got on it, the hike on the official nature trail definitely yielded its share of beautiful and interesting sights -- including of some of the oldest rocks (i.e., up to 280 million years) in the Big Lychee. Still, what with the walking surface including sad and mud, sections of the hike being along an overgrown path and our having to double back at the end of the trail, my regular hiking companion and I decided to take up the offer by a fisherwoman to head back to near the start of the pre-hike on her motorized sampan. (This not least since by that time, we had ended being on Ma Shi Chau for quite a bit more time than we had thought we would be -- suffice to say that there was a lot that caught our eye and want to photograph!)

After arriving back near Sam Mun Tsai New Village, my regular hiking companion and I decided to toast our great day with a beer each while hanging out a wooden pier watching the sun set before heading to Tai Po town for dinner. And hopefully it will not be tempting fate too much to state that I really will be a happy person if a lot more weekends could be spent like this one has been... :)
Posted by YTSL at 9:39 PM

Wow, that does sound like your perfect weekend. Good timing too.

Happy Birthday! Sounds like it was a good one!

Thanks... and glad that you "uncloaked" from your lurking position! ;b

I don't like conventional cakes -- but moon cakes... though not birthday related, have 2 1/2 still in my fridge to slowly enjoy! :D

Yeah, it really turned out to be a great birthday weekend. :)

Thanks and yes, indeedy! :)

One beer while enjoying the sunset. But I did have more beer at dinner... ;DDD

Thanks and -- from reading your entry -- glad you enjoyed the concert too. :)

Hi YTSL, now that's how a birthday should be celebrated. Happy Belated Birthday!

Happy Birthday, YTSL! Sounds like you had the perfect weekend. Here's hoping the next year is full of such weekends. :D

And thanks for the link to the Liu Bolin show. I've seen his "hiding" photographs before, which I love, but not his sculptures. I especially liked the "Anomaly" series with the sprouting heads!

happy birthday - yes wasn't it a great concert - wish we'd had more of her interacting with the audience - what a charismatic person she is - she had my kids absolutely spell bound!

That sounds like a great time--good company, beautiful scenery, and good food. That is a recipe for an enjoyable weekend if I ever heard one. Happy birthday!

Agreed and thank you. :)

Don't worry about being late - all the continued birthday wishes helps makes me feel like it's still my birthday. ;b

Thanks and you're welcome re Liu Bolin. Actually, what I found a revelation in this new exhibition was his "shadows" series -- though, if truth be told, the invisible man works are still the ones I like the most.

Re Evelyn Glennie: In retrospect, I wish I hadn't been shy and had given her a standing ovation. She really was amazing.

And a nice mix of culture and nature too! :)

A very belated Happy Birthday wish from me. :)

Belated your wish may be but I accept it appreciatively nonetheless. :)