A stair- and step-filled Sunday 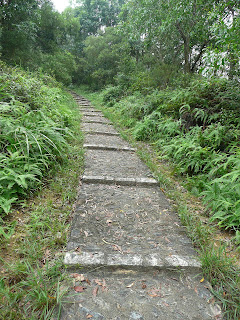 An uphill portion of the Fung Hang Family Walk that --
contrary to remarks on the Nature Touch website --
I don't think is suitable for "everyone" (e.g., my mother) 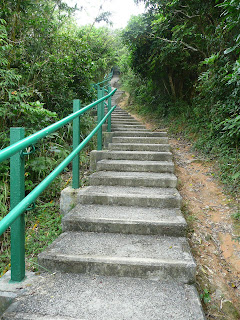 The seemingly neverending flight of steps that
-- hallelujah! -- turned out to be the final flight
before one got to the summit of Wu Tip Shan
Earlier today, my regular hiking companion threatened to kill me for only the second time in all the time that I've gone hiking with her. The first time was close to a year ago now when midway through our hike on Po Toi island, we were confronted with a rather formidable hill to climb on a super sunny, blue sky day. This time around, it was when we were hiking a hill -- Fanling's Wu Tip Shan --which I had mistakenly thought was closer to being a hillock than a mountain -- as an addendum to the hike we had gone on earlier in the day along the Fung Hang Family Walk and then back to the 56K Green Minibus terminus at Luk Keng.

Although the Fung Hang Family Walk had its share of stairs and steps, the truth of the matter is that, even on a super humid and officially designated Very Hot Weather Warning day, it was a little too easy for my regular hiking companion and I. Coupled with the low visibility this muggy day that made it so that we had to focus on taking photos of plants and insects rather than scenic vistas, the hike could be said to leave us wanting more... (even though it's also true enough that we actually were happy to be able to be out hiking again today after last weekend's forced hiking hiatus).

While I wouldn't go so far as to say "big mistake!", the truth of the matter is that Wu Tip Shan turned out to be higher than either of us had thought it would be. Consequently, we got much more of a workout climbing it than we had anticipated!

Still, a lot of sweating (and cursing) later, we did manage to get to the top of the hill... which, admittedly, does not rank among the top 130 hills, mountains and peaks of Hong Kong. Nonetheless, believe you me, there definitely was a sense of achievement upon ascending to its peak! And this even though we saw quite a number of far older (but still obviously fit) people coming down as well as going up it along the way... ;b

sounds like an adventurous climb, one which I probably would end up finishing even when I don't quite feel like it, still, I'm sure it must be good to be able to walk it

Luk Keng seems like it would be worth a trip in itself, at least from the pictures and narrative on the link.

Steps stretching upward forever (although you know they aren't really forever) can really be daunting when you are expecting something less challenging--the tip down must have been taxing as well.

Is Typhoon Fanapi going to miss you to the North? It made quite a mess of things in Taiwan.

The thing is -- we actually had two climbs/hikes in one day! Which is why the second felt so difficult! ;(

Yes, Luk Keng does look very interesting. So much so that my regular hiking companion and I have talked about returning -- in nicer weather.

Ad re steps going down: so long as there are stairs, I'm okay.

As for Typhoon Fanapi: Touch wood it's going to miss us but at this point, we're currently having Typhoon Signal #3 because of it...

Yes I checked out that Wikipedia list after I went up Castle Peak on a rainy day - i really felt is was a slog - and was gutted to find it was only 25th!

25th sounds pretty good to me. The highest Hong Kong peak I've hiked completely up is Buffalo Hill (at number 16) and I have to say that I'm not to keen on climbing up any of the top 15 any time soon! ;S