The Evergreen Classic at the Hong Kong Museum of History 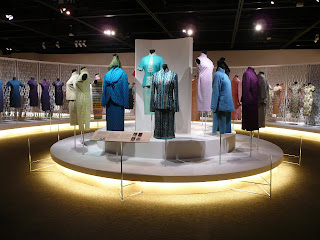 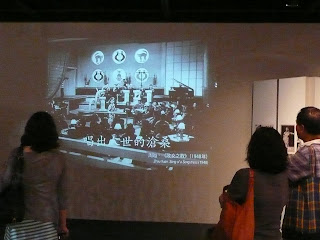 Short videos, including a 15 minute montage of film clips
featuring qipao-wearing actresses of yesteryear
(like Zhou Xuan ), added considerably to the exhibition experience 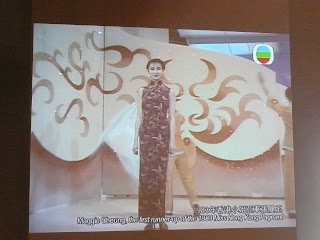 Another short video showcased qipao-attired Miss Hong Kong
contestants (including, from 1983, a certain Maggie Cheung)
Hong Kong's weather forecasters sure were right: this weekend has turned out to be a thoroughly rain-soaked one indeed here in the Big Lychee. So rather than go hiking in the rain or sulk in my apartment, I spent a good part of this afternoon doing something I had suggested in my Things to do in Hong Kong when it rains blog entry (which, more than incidentally, appears to be one of the all time most popular posts on this blog!): i.e., spend time in a museum.

More specifically, I followed in duriandave's footsteps and finally checked out -- on the second last day before it closes -- the Hong Kong Museum of History's special exhibition on the art of the qipao (cheongsam). And although there is no way that I'm even half the qipao (cheongsam) fan that he is, I found so much in there to capture my attention that almost before I knew it, I had spent some three hours going through the exhibition that features: display upon display of qipao (cheongsam) from different eras, including individual examples worn by -- and belonging to -- the likes of Josephine Siao Fong Fong, Nansun Shi and the wife of the Nobel prize-winning physicist Charles Kao; historical photos of qipao-wearers including Eileen Chang and Soong Ching Ling; and short video compilations of such as scenes of qipao-clad actresses and Miss Hong Kong pageants.

As for the actual physical examples of qipao on display: I have to say that while I am grateful to the museum authorities to allow photography (even flash photography!) inside the exhibition but it actually was almost excruciating to find so many of the dresses not behind glass, yet still be literally untouchable. For while the ex-museum professional part of me definitely does understand the reason for this decision (one word: conservation), other parts of me were so tempted to feel some of the qipao because in addition in coming in an amazing range of styles, colors and shades, they also were made from a variety of textiles that looked like they would have been so very different to the touch!

Rest assured though that I did adhere to the rules -- and didn't see anyone not obey them while I was there! (And from the latter observation, I think one can surmise that Hong Kong museum goers are quite a bit better behaved than many a Hong Kong cinema goer... so, there may be hope yet for that less well-behaved group, we hope!)

Hi YTSL! Glad you saw the exhibition before it closed and, even though you are half the fan I am, spent twice the time I did. I would have stayed as long as you but jetlag kept me from reading all the signboards, which is why I was especially disappointed there was no catalog for the show.

And yes, it was nice to see the qipao sans glass, which must of helped the museum to show as many dresses as they did.

Hope the weather next weekend is more conducive for romping 'round the wilds of HK! :)

Omg~I must make them hold this exhibition again next time i'm in hk, it's too short!!`

I thought you might mention Anita Mui. How long has she died now?

Thanks for the extra push to catch the exhibition.

It's really too bad the jetlag kept you from reading the labels. They were generally pretty good (give or take a few grammatical mistakes). Also, hope you didn't rush past the final sections of the exhibition as they were where the Miss Hong Kong video clip and such were.

If they ever hold the exhibition again, I'll be sure to let you know! :b

Anita Mui passed away the tail end of the year that Leslie died (2003).

From your and duriandave's posts looks like a fun and excellent exhibition. Hehe...The way it was set up I would have been tempted to grab and run off with some of the garments.

Did you happen to take a photo of the Eileen Chang photo?

Do you know what "Evergreen Classic" refers to?

One of the times I envy you living in Hong Kong.

Actually, there were several Eileen Chang photos... but, alas, no, I didn't take photos of any of them. Sorry!

As for The Evergreen Classic: I think it'll help if I pointed out that exhibition's subtitle is "Transformation of the Qipao". Alternatively put: the qipao itself *is* the evergreen classic.

Great post YTSL. I also loved duriandave's post as well. I shared some pictures with duriandave of my fiance's mothers wedding qipao's. If you are interested I could email the pictures to you as well. The qipao's are from the 70's. She had 2 of them made for her wedding, one red and the other yellow.

Thanks for reading and also the pictures offer. I think I'll hold off for now re the latter though. Like I wrote, I'm actually not that big a qipao fan per se -- but have to say that the exhibition really was excellent. :)