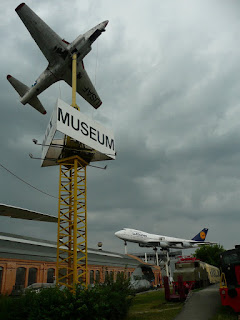 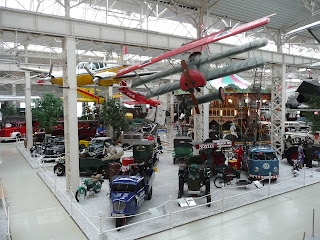 A small visual taste of what's on exhibit
in the museum's cavernous main building
Ever since I was a young child, I've been fascinated by museums -- and for a time, museums were my professional vocation as well as extra-curricular love. And even while those days are long gone since I worked in (and studied) museological establishments, I have continued to visit my share of those institutions in various parts of the world. So it won't come as too much of a surprise to know that I checked out my share of museums on my German holiday back in July (more than a month ago now -- how time flies!).

Not counting such as cathedral treasuries, Speyer's Jewish Courtyard (which a woman working though pointed out is a memorial as opposed to museum) and The Sacred Site of Isis and Mater Magna in Mainz, my German friend and I visited five museums in four towns and cities.

First up was the Pharmaceutical Museum housed inside of Heidelberg Castle. If truth be told, it was on the small and dry side as far as I was concerned -- and I was much more enamored of others of the castle's attractions, including its sizable gardens and the views to be had from various parts of it.

Far more impressive (as well as interesting and plain fun) for my money was Speyer's Teknik Museum. After getting "churched-out" in that town, a visit to that vast technical museum filled with all manner of aeroplanes (including a Lufthansa Jumbo Jet), boats (including a German U-boat!), trains (including one from China!) and assorted other vehicles and machinery, including those for farming and leisure (such as a carousel!) was just the ticket to feel refreshed enough so that I actually did end up returning to Speyer Cathedral later that day (albeit to attend an organ concert!)!

A few days later, I had the treat of visiting not just one but two world class museums in Cologne. On my first day in that wonderful city, my German friend and I spent several hours checking out the art on offer at the Museum Ludwig. (And it was sheer coincidence and luck that there was a special exhibition on the works of a favorite artist, Roy Lichtenstein, there when we visited.)

On day two, we spent even more time at the Wallraf-Ritchartz-Museum which I found myself loving not only for the seven centuries worth of art on display within its walls but the superb effort on the part of the curators through such as three different categories of labels (i.e., general ones, those geared for children and gay-focused ones geared to coincide with Cologne's hosting this year's Gay Games) to inform and educate about art and so much more. If only more museums -- including the Museum Ludwig, actually... -- could be take so much pain to inform and educate, and in a really interesting way too!

Finally, in the last German city I spent several hours in on this recent holiday, I visited one of the oldest museums of printing in the world. Mainz's Gutenberg Museum celebrates the work of Johannes Gutenberg and more. With time running out, my German friend and I rushed more through this museum than we did the others we visited together. At the same time though, I also had to skip through and over quite a few sections because they didn't have labels -- only titles! -- in English...

All in all, however, I can't -- and won't -- complain because the truth of the matter is that I thought that my time in the museums I visited this recent holiday were generally very well spent. And money too, actually... even though after getting accustomed to the really low -- generally HK$10, and free on Wednesdays for some (and free at all times for others!) in the bargain! -- of Hong Kong's museums, it admittedly came as a shock to discover that some museums' admission fees actually were over 10 Euros: i.e., more than ten times that of some very worthy museological establishments indeed that are found in the Big Lychee such as the Hong Kong Museum of History, Hong Kong Heritage Museum and Hong Kong Museum of Coastal Defence!

I' love to visit the Teknik Museum!

I got used to free museum entry in the UK so it took me a while to expect to pay in France - but even the Louvre is less than 10 Euros!

Since it's closer to where you live than Hong Kong, I'm thinking you have a good chance of visiting if you set your mind to it! ;)

How much is the Louvre these days? Can't recall as much sticker shock as on my recent German visit -- and also when visiting museums in Japan!