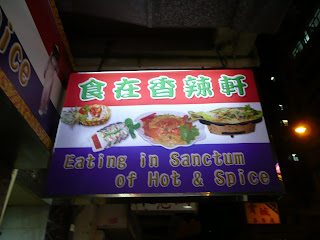 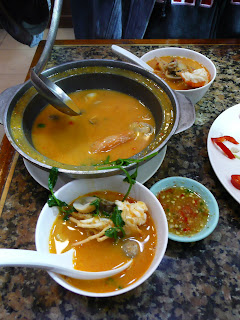 The last time that hot was the Photo Hunt theme of the week (back on November 24, 2007), I went for a hot weather option. But seeing much truth as I do in the saying that variety is the spice of life -- and so much so this is the second blog post in a row in which I find it appropriate to mention this idiom in the first paragraph! -- I've gone for a different take on the theme this time around: one which involves hot and spicy food, the kind that can make it feel like your mouth is on fire and cause your sweat glands to work over time...

More specifically, regardless of whether it's served at the eatery that actually has the unwieldy name of Eating in Sanctum of Hot & Spice or elsewhere, the cuisine of Thailand gets my vote for being the hottest food I've ever eaten. For although I do realize that Thai dishes include non-spicy options like delicious mango with sticky rice (and rich coconut milk), items such as nam prik (Thai chilli pastes or dipping sauces) and tom yam kung are so spicy hot that they have often caused me to cry even while I masochistically continue savoring them (because they really are so very tasty as well as often downright painful to eat!).

Considering that Thailand is the northern neighbor of my home country of Malaysia, it can seem strange that I first became majorly drawn to Thai food when living in England. But this is indeed the case -- and due in no small part due to an airline flight engineer uncle of mine introducing me to his favorite Thai restaurant, located in the basement of a Kensington High Street building, that I would make a point to go eat at each time I went to London during a half-term break from boarding school.

In the years since, I also came to have favorite Thai eateries when living in Philadelphia (including a neighborhood restaurant in West Philadelphia whose owners previously had been behind the famous Thai food truck that would park by Penn's campus) and now in Hong Kong (particularly in Kowloon City but also Kennedy Town). Still, it's true enough that Thai food is best eaten in Thailand... so much so that some twenty years on, I still find myself recalling with great pleasure a mouth-watering dinner I had in Chiang Mai, one that of course was characteristically hot and spicy but also oh so very delicious! :b

I love hot and spicy foods! They don't always love me in return though ;) Happy weekend!

what a delicious entry. you're absolutely right. nothing beats the hot and spicy food in Thailand.

This reminds me that whenever I eat in a Thai restaurant I always quiz them very carefully on how hot everything might be. I am not as fond of spicy food as you are and have had some eye watering experiences inadvertently.

Happy weekend to you YTSL

Good choice. Love Thai food. Hope you have a nice weekend. We are driech and drookit.

now that is a "hot stuff" that i may have a hard time to handle. you have a yummy post.

I love Thai food very much and usually my friends and I go once a week to our favourite Thai restaurant. But I don't like it too hot but they also have plates which are not spicy at all lots of vegetables and other spices.

I find Mexican food in Australia very bland and turn to Thai when I need my hot food fix. However, last night I did have some hot jalapenos that brought tears to my eyes.

Wow! That looks really hot! I'm bot a fan of spicy foods but with the looks of that dish its worth a try. :)

I am a fan of hot and spicy food! In fact, the hotter and spicier it is -- the better :)

Sadly, and despite having a step-father from India and loving curry... I can't take the heat.

I went with 'food' this week as well.

Hot and spicy- my kind of food!

Love your photos and your take on the theme. I love Thai food and hope to visit Thailand someday for the real thing!

defintely HOT..hehhee love all your photos..

Hi YTSL, hot & spicey thai food. Add me to the fan list. How wonderful that you've had a taste in so many different places. I think it's good to have a little spice in our lives.

Thanks so much for sharing and have a wonderful weekend.

Oh dear at your unrequited love! ;(

Thanks for your appreciation! :)

You know what else is really tasty in Thailand? Fresh orange juice! ;O

I find that I have a bit more tolerance for spicy food that's got lots of coconut milk mixed into it than those that are not like the food of China's Sichuan Province... Those I consider beyond eye watering -- to the point of being stomach upsetting! ;(

Thai food adds some spice to life, doesn't it? ;b

One method of dealing with overly spicy food: eat a banana. Seriously!

Yes, Thai food does have its less spicy dishes. One of my favorites is fried morning glory. :)

There's a Mexican restaurant here (Agave) which has Nachos done two ways -- gringos (less spicy) and machos (super spicy). If you ever come to Hong Kong, you can go there for the nachos machos! :b

The tom yam soup's actually not TOO hot. Found it really nice with rice (to help balance its heat). :)

Yikes... I don't think I'll be eating with you anytime soon then! ;D

Not all curries are all that spicy hot, surely? At the very least, you can eat daal, right? Hope so!

Everything in moderation -- I like non spicy food too sometimes! ;D

I can imagine! :DDD

Hope you make it to Thailand to try the wonderful food there -- and more -- some day soon. :)

You said it re it being nice to have a little spice in one's life. :)

What a great post for the hot theme. I like hot and spicy food but it doesn't always like me. I can indulge in it occasionally though and there is a small family owned and operated Thai restaurant not too far from me that is delicious. That family hasn't been in the U.S. for very long. I've never been to Thailand so that's the closest I've gotten to authentic food. Now that I think of it I've also had Thai food in England but that was ages ago. Happy weekend.

I've just finished an Indian meal, though it wasn't an especially hot one. Nevertheless, you have my mouth watering with our Thai cuisine! :)

A very nice take on the theme. I love thai food even if I have never been near Thailand

Great take on the theme of HOT. I am waiter fond of spicy food, Thai and otherwise.

That was indeed a tasty soup. Full of interesting flavors because of various spices as well as spicy hot!

Glad that you can get authentic Thai food where you live. Some Thai resturants here in Hong Kong have unfortunately "Chinese-ized" their food... hence my feeling obliged to trek out to such areas as Kowloon City to get my more authentic Thai food fix!

For my money, Thai food is spicier than Indian food. (Both can be super delicious though!)

I'm the same with Ethiopian food -- loving it even though I've never been there... ;S

Sounds like you're happy to have spice in your food (and presumably life too!). :)

Tom Yom Kung are my fav. Is that a curry sauce? Looks like pumpkin soup.

It is so funny, no Ang Mo picked up the swaztika in my window. Saves me from having to explaain. In Singapore, there is a Red Swaztika school.

That's actually Tom Yam Koong in the photo! And re the ang moh and the swastika: maybe they were just too polite to comment -- unlike me! ;D

That soup looks so good. I would love a bowl right now. Thai food is very popular here in Seattle. We're starting to love it really hot/spicy. Noodles are my favorite.

And spicy hot is a perfect interpretation of this week's theme.

Hottest food I ever had was in Sri Lanka - then called Ceylon. I was with my parents and brother and we had all been living on Indian food for some years - but that didn't prepare us for food so hot that all of us thought we were going to die. But it still tasted pretty good once you got past the pain! The hottest food in Thailand comes from the northeast part of the country - Issan - it makes other Thai food seem mild by comparison. Your tongue will feel like it was placed on hot coals.

Interesting to learn that Thai food's popular in Seattle. Had been told years ago (by someone who got her Ph.D. from the University of Washington at Seattle) that Seattle considers itself part of the Pacific ecumene and thus looks a lot towards Asia. Do you think that's true?

Yikes, that food sounds too hot for me. Like I wrote in the post, I've eaten Thai food so hot it made me cry (and sniffle). Another place with amazingly hot food: Kelantan. Eating at a local street market, I had to down three bottles of Fanta after finding out the hard way that the "kuah" they had ladled on to my rice was more like chili sauce than regular gravy! ;(