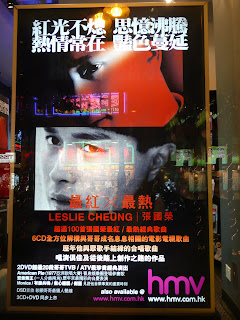 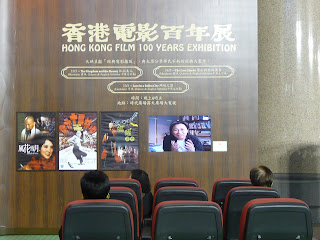 When I saw anniversary listed as the Photo Hunt theme for this September 11th, I of course could not help but think of events that took place on the eastern seaboard of the USA nine years ago today. Let's face it -- there's no two ways about it: For many people, especially those who are American and/or were residing in the US then and/or now, 9/11 conjures up horrific images of terrible destruction and tragic deaths.

Yet, it can often seem like we tend to remember sad anniversaries more than happy ones. Even with regards to the Hong Kong entertainment world, every April 1st since 2003, I (and many other fans of Hong Kong cinema and pop music) don't need much reminding -- but are given ample reminders via the likes of HMV -- that the beautiful, amazing talent that was Leslie Cheung decided to prematurely end his life that day. Alternatively, even I needed to be told that 2009 was the 100th anniversary of my favorite cinema in the world. (Or was it? Because there appears to be some dispute as to its exact beginning date!)

In any event, I hope it will not offend anyone for me to suggest we pause at some point today to remember the tragedy that humanity can inflict on its own members but then move on and continue to live our lives -- because it is through the very act of living (and appreciating our doing so) that we honor those whose lives were cut unnecessarily short and show our defiance against those who don't want us to do so.

Excellent post. I also think it's important to remember the happy as well as sad anniversaries. I know with my parents, I sometimes don't think of the anniversary of their death as years go by but I always remember their birthdays. For that matter, although my anniversary post was remembering the September 11 attacks on the WTC and other places, I used photographs I took when I was in Manhattan for my 50th birthday which was a happy time as my family gathered there and I was surprised by some I didn't realize were coming. One of my sisters has lived in Manhattan for over 30 years so when I think of September 11, I always think of the attacks but also of happy times there and of my sister who lives there.

Great post!! Especially your last paragraph. Thanks for coming by to see me...

Excellent post YTSL. Today is the ninth anniversary of a vile act of terrorism but you are quite right, it is a day when other, happier event took place too.

Your last paragraph says it all

Great post as always - yes, it is important to remember the significant things that happened on September 11th but your reminder that other things happened on that date is timely. Unfortunately, with so much in our world these days, the emotions egt sidetracked by politics and the agendas of others. Thanks for the reminder.

very significant post..i agree with you on your last paragraph..:)

my entry is up too..

Wonderful post! I love the way you look at the bigger picture. I'm avoiding TV here in the USA this weekend because I don't think I need to see those towers fall over and over again.

Thanks for visiting mine and have a nice weekend.

That was indeed a very good post for today's theme.

mine is up too.

Some will want to move on... some will never forget.
It is the way of the world.

I like your theme of hope and looking forward. Thanks for reminding us of some happier anniversaries!

Anniversaries and birthdays are important markers in our lives. Yours are interesting.

So it was REALLY shocking for me to see the World Trade Center collapsing as it did that day in 2001. At the same time, I also have a lot of good post 9/11 New York memories -- hanging out with friends who I still am in contact with some seven years after leaving to the US and all.

Am glad you took my post in the right way -- you helped to convince me that I was right to write it. :)

I just hope that emotions won't get manipulated by politicians -- as well as fanned by them. There is a time to feel but there are also times when one should allow one's brain to think.

I had a great Saturday (among other things, had a nice dim sum lunch, attended a wonderful concert and hung out with friends to watch Arsenal (my favorite soccer team) play and win!). Hope you did/do too. :)

For me, the towers falling was one thing... the jumpers another. Those poor people...

Moving on is not forgetting. And if we don't move on, we'll be stuck and not be able to progress. A sad prospect indeed.

As the saying from whence I got the title of my blog goes: Man is an animal suspended in webs of significance he himself has spun... ;b

That's very nice otherwise we would get an overdose if we would put all pictures of the same event.
Re my medal, my Mother in Law gave me very precious antiques before she died because she thought I would be the only one who really appreciated it. (and she was right, my BIL would have thrown it in the garbadge !)

What a great post, thankyou for researching and sharing the information :-)

I know what you mean about too much of the same... I wonder whether that's why a number of Photo Hunters didn't play this weekend... In any case, hope they'll be back next weekend.

You're welcome and thank you for appreciating. :)