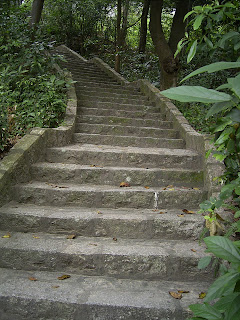 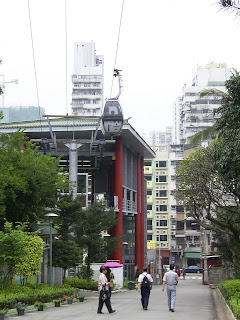 As with my previous week's Photo Hunt entry, I can't resist putting up two photos rather than just a solitary one. This time around though, only the first image directly relates to the week's chosen theme: i.e., "Steps". However, if you continue your reading, you'll understand why I figured that it also would be good to include the second photograph into the bargain.

Firstly, here's identifying the steps in the first picture as but a few of the many stone steps which lead up and down leafy Guia Hill. Though it stands at just 94 meters above sea level, this natural point is the highest in Macau (once a Portuguese enclave but, since 1999, a Special Administrative Republic of the People's Republic of China).

Atop Guia Hill sits the 17th century Guia Fortress complex which includes a picturesque lighthouse that was the first modern installation of its kind on the Chinese coast. With much of it being open to the public, this historic monument is one of Macau's major tourist attractions.

On the other hand, the local folks appear to be much more attracted to the jogging tracks and other exercise venues and set-ups on Guia Hill; and I can well imagine that many of them do regularly incorporate a trek up the stone steps in my first photo as part of their "keep fit" regimes.

For those who are less inclined to exert themselves in this manner, however, there's the Guia Cable Car (see the second photograph above) which offers a very short (i.e., 80 seconds!) but scenic ride up to a stop close to the top of the hill. And yes, if you're wondering, on my visit to this locale, I elected to go for the compromise plus medium exertion option of taking the cable car up and then walking down Guia Hill.... ;b

Very interesting explanation and I think you took the same combination as I would take.
jmb

Lovely steps and I think you chose wisely too!

Very interesting post and a lot of steps to climb ! I think by the end of the day (here it's 6.30 am) I will not feel my legs anymore !

Hmm I think both ways up the hill would be great! The stairs look mysterious as they disappear into the woods. Happy Hunting :)

Love these stairs, particularly if you can't see exactly where they are going... love surprises. But I am with you... car up... walk down... but carefully.

Thanks for your comments.

Ditto! And yes, agree that the steps are lovely (to look at and also walk on since they're neither too steep or shallow). :)

Thanks for the reciprocal visit and it's so cool to encounter a blogger who actually lives in the original Waterloo! :)

"Hmm I think both ways up the hill would be great!"

Get the feeling that you're far fitter than moi since, as you've noticed, there are a lot of steps to climb there! ;b

Guess we're on line at the same time!

And yeah, it's hard to see where exactly you're going when going up but also down those steps as the surrounding vegetation is on the lush side. :)

Awesome photos for the week with a great post..thanks

Very interesting! Climbing all those steps would be a good workout! Those stairs look lovely. Great photos. :)

Thanks for liking what I wrote as well as the photos. Also, hope you all (and other photo hunters) will stay a while or visit again and check out other entries on this blog besides the one that you've commented on! :)

Oh, I like both of these photos.
Wonderful shots.

It's just amazing how you could elaborate so much about on what seems to me an ordinary photo. You must have had an interesting life.

I think I'd opt for the ride, also! Thanks for stopping by my blog!

The first photo is so nice, but I would definitely have taken the cable car! Sounds like a great place to visit.

And you can steal my "For Love of Travel" theme...I don't mind at all!

Although my lazy self would probably choose the cable car, I do love the first picture - so peaceful and somehow mysterious... dissappearing off into the hills...

Very nice pictures and thanks for giving us the second option also!

Glad you like my photos since I definitely did yours! :)

Heheheh. Some people might look at it the other way: I.e., I must have had a boring life; otherwise, I wouldn't see something special in something so apparently ordinary!

Still, I prefer your intepretation and do think that, if nothing else, I have had an interesting life. :)

You'd opt for the ride both ways or just up the hill? ;)

Thanks for the permission to "steal" your "For Love of Travel" tag. However, now I exclusively associate it with your blog and you. So... ;S

It was peaceful on those steps. All in all, it was much needed respite as the previous couple of weeks, I had been in Hong Kong and that's a place where one is more likely to be among crowds than out of them. (Understatement of the year there?! ;b)

You're most welcome re showing you folks the second as well as first options! :)

Teeheehee re your preference for the cable car (and both ways, I presume)! :b

I love the way the steps look. but I'd go for the cable car. :D

Wow - those are a lot of steps. Love the cable car. Always good to have a choice. :)

Too bad most people in this world take everyday life for granted. Simple thing such as watching birds flying across the sky is a gift in my point of view. It's what you get out of the experience that matters. It's a pleasure to read your stories.

Even based on the comments on this thread alone, you're not the only one who'd go for the cable car option... ;)

Absolutely agree that too many people take everyday life for granted. Have long found it difficult to understand people who talk about being bored (with the world, etc.) Honestly, there's always at least something that can get the mind going, the heart feeling and appreciating, etc.

Thank you for reading my writings. Remember a comment from you from a thread many moons ago so realize that you're actually a regular visitor to this blog. :)

Thanks for the vote for commentary accompaniment. I've wondered whether I shouldn't just let pictures speak for themselves but often find the stories behind them too interesting to not write about! :)

Ramblins of a middle-aged goddess said...

Thanks so much for stopping by!! I love new visitors!! Stop by again anytime!! Sorry that you did not make it to our lovely old town Savannah. We have a lot of history here. Beautiful city too. The pictures I had up yesterday are not the most beautiful. I have posted better ones before. Yours were very interesting today too. Sandy

You're welcome and thanks too for stopping by over here. Also, yes, like you, I like getting new visitors (and especially ones who are wont to leave nice comments on my blog). And okay, I'll go hunt for nicer pictures of Savannah on your blog before too long. :)

Great photo and I especially loved the explanation.
The quiz, then, is which way would you walk? I think I'd walk up and ride down 'for dessert." LOL
Your blog is very interesting too. I need some more free time :)

Thanks for visiting and commenting. (I thought that after the weekend flurry, no other photo hunter would be checking in over here! ;))

And yes, really would appreciate your visiting other sections of my blog, and hope that there's much there that will capture your interest. :)