Before anything else: Here's confirming that I'm back in my home state of Penang, having flown back from Hong Kong sometime yesterday. And speaking of yesterday: This particular blog entry plus accompanying photo-essay is inspired by it having been Holy Friday for Malaysians of more than one religion.

By this, I mean that not only was it a day which saw the country's Muslims flocking to mosques to attend the Friday prayers that are the customary high point of their religious week but it also happened to have been a special day for those Christians, Chinese Buddhists (whose particular strand of Buddhism has a place for Kuan Yin, the Goddess of Mercy) and Hindus who have a hand in allowing the country to boast of having the gloriously diverse religious, cultural and linguistic community that it does.

More specifically, yesterday was Good Friday according to the Christian calendar but the 19th day of the second month of the Chinese lunar calendar -- a day celebrated by many Buddhists as the birthday of the Goddess of Mercy. Furthermore, as a consequence of the Roman calendar's 7th April, 2007, additionally having been deemed to be an auspicious day to pray to Lord Ganesha to remove all obstacles, Hindus in Malaysia (and elsewhere) had cause to head to their religion's often richly decorated places of worship for prayers yesterday as well.

As it so happened, before my most recent trip out of the country, I had decided to go around Penang to take sample photographs of many of the more major religous buildings and sites that are to be found on the Island -- and often within walking distance of one another.

The following is a selection from my photographic collection that I hope will give you some idea of the interesting architectural variety plus diverse cultural heritage that is to be found in the Pearl of the Orient; a place whose claim to fame these days largely comes by way of its tasty culinary offerings but which previously offered -- and, to my mind, still could offer -- so much more:- 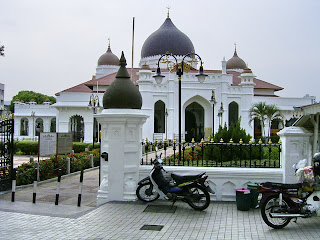 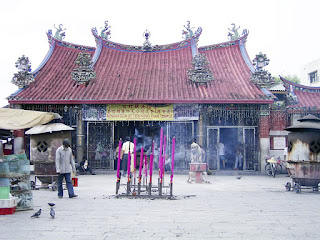 Penang's oldest temple, the Goddess of Mercy Temple,
was built by members of its Hokkien and Cantonese communities
along what's now known as Jalan Masjid Kapital Keling
(jalan is the Bahasa Malaysia word for road) 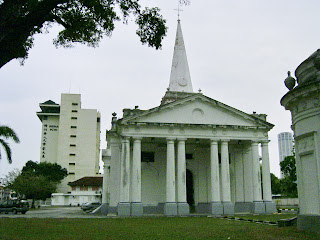 The colonial era St. George's Church,
Southeast Asia's oldest Anglican place of worship,
lies a stone's throw away from the Goddess of Mercy Temple
at the corner of Jalan Masjid Kapital Kling and Farquhar Street 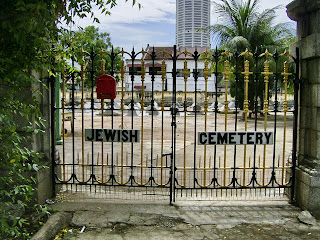 Unbeknownst to many people, including local folks,
is the fact that Penang has a Jewish Cemetery
which is well-maintained, contains over 100 graves
(the most recent of which dates back to the 1970s)
and may well be the country's -- if not the region's -- oldest 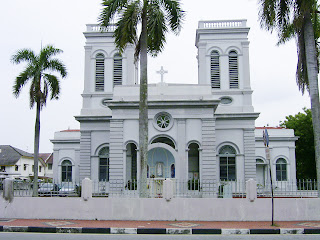 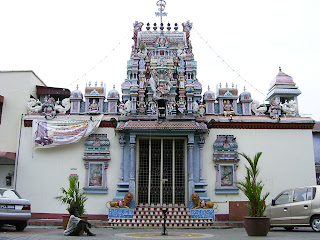 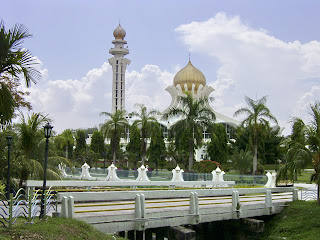 Completed in 1980, the Penang State Mosque's existence
stands as testimony that Islam is Malaysia's official religion
(even while the state's other religions' places of worship
provides positive proof of the religious diversity of its people)

v. nice photos. these calendar collisions of festivals always remind you of the rich diversity of malaysia

and i miss penang!

Glad you like the photos. If truth be told, even though I do find all the featured buildings to be very interesting, I only *really* like the photo of the State Mosque myself. (Have found that the best outdoor shots in Penang are to be got when the day is at its sunniest and hottest and guess which photo out of the seven was taken on the sunniest and hottest of days? ;b)

And if you miss Penang, come back and visit sometime soon then! :)

Ditto on the very nice photos. My favorite is your photo of Penang's oldest Mosque. I like the contrast between the orderly, clean, crisp white Mosque with the randomly parked motorcycles.

Glad you like that contrast! And I hope that it helped to convey the idea that the mosque is far from a forbidding place... :)

One other funny thing about that photo of the Kapitan Kling Mosque is that the building is actually closer to light yellow in color in reality. All I can think of to explain the visuals is that it was very bright when I took that photograph... ;S