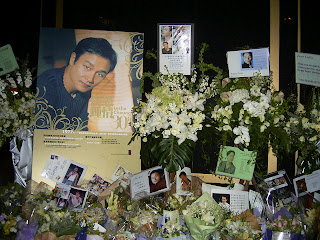 In Memory of Leslie Cheung

Just a short note to let people know that I am -- as promised -- occasionally checking the internet and in over on this here blog. Also that it's been grand over here so far.

Additionally, here are three things that I sometimes forget about Hong Kong and the Hong Kong International Film Festival (HKIFF) when I've been away from them too long but which already have been brought back home to me:-

1) Hong Kong, and the HKIFF in particular, is where I'm likely to bump into friends at a more frequent rate -- as well spend time hanging out with them -- than in Penang itself;

2) Hong Kong, and the HKIFF in particular, is where you really can encounter film celebrities pretty much "just like that". As an example, yesterday, as I went to queue up for the HKIFF screening of the director's cut -- i.e., 160 minute length -- After This Our Exile, I almost literally bumped into actress Theresa Mo in the hallway. And I'm still kicking myself for not having gone to the HKIFF screening on Friday evening of Dream of the Red Chamber since it turns out that Sylvia Chang -- one of the film people I most admire and respect -- and Shaw Brothers legend Yeh Hua were there to do a Q&A at that event.

3) Sometimes, it seems like pretty much every corner of Hong Kong has a movie association. For example, this time around, I'm based in Wan Chai and every few minutes that I walk, I see locations, things and happenings that make me think of Crazy 'n the City (a film which, for those who don't know, is entirely filmed in Wan Chai district).
Then, last night, David Bordwell, Akiko Tetsuya and I happened to walk past the Mandarin Oriental hotel. As we did so, we noticed that a side of it was full of floral wreathes and a big photograph of Leslie Cheung...all of which brought home the sad fact that today is "Gor Gor"'s death anniversary.

Leslie, we still miss you. Hope you're resting in peace.

Greetings! It's nice to hear from you. And here you told us you wouldn't likely be blogging for a bit. Glad you found a chance to check in.

It's sounds like you're having a great time. I'm happy to hear it! And how cool to be seeing the faces and walking the streets that you know from movies.

Had any good food on your trip so far?

Yes, I'm able to check in but looking at the blog entry, etc., I've gotten confirmation that Blogger just doesn't seem to like Microsoft Internet Explorer too much and refuses to deal with the paragraphing that I try to put into my blog entry! :(

Glad that not only you are safe & sound but also having blast :)

Your missing Dream of the Red Chamber thing was a bummer but again Brigitte might have been there and your missing that would officially be horrible.

And trust you to see a HK celeb every corner ;) Insaallah your luck will continue and you'll have even more things to report (and pictures :) )

Wow. DREAM OF THE RED CHAMBER with a Q&A with Sylvia Chang! The only thing better would be Sylvia and Brigitte!! I would love to have been there. As you know (but your readers won't), I'm a big, big fan of that version of DREAM and think those two actresses do some of their best work in it.

I know this may sound strange, given that Brigitte Lin *is* my favorite actress, but I actually don't have much inclination to meet or even see her in the flesh.

Unfortunately, sometimes, when doing so, we truly discover that our idols have clay feet and as far as screen legends are concerned, sometimes it may be best to think and remember them as they were (on screen) rather than (really) are.

A somewhat sad case in point for me: Last November, I saw Grace Chang (aka Ge Lan) (THE MAMBO GIRL, THE WILD WILD ROSE, etc.) in a Hong Kong restaurant. Only, of course, she's no longer the diva whose glamor and vivaciousness was captured in many a Cathay film but, instead, a, well, dumpy, looking tai tai who now is in her 60s... :S

Hi YTSL! I took you at your word that you wouldn't be blogging while in HK, but at least I have lots of reading to catch up on now.

Wow! I wish I had seen Grace Chang. For me, her current "tai tai" appearance would have made it more likely that I muster up the courage to say hi to her. If it were her younger self instead, I would probably just faint! ;)

Tsk, tsk since I did say I would at least check in and do some commenting, even if outright blogging... ;S

"If it were her younger self instead, I would probably just faint! ;)"

Meanwhile, as far as Brigitte the Great is concerned, I think I would faint whether it be her younger or older self that I see, never mind meet! ;D

Also, I gather that she has a family home in San Francisco but spends most of her time in Hong Kong -- and has done so for many years now.

Hello Ms. YTSL, I'm struck with insomnia over here in Singapore, overly buzzed by the Singapore International Film Festival. As I was lying crosswise on the pull-out sofa mattress with my head on the floor, I suddenly thought of Leslie Cheung and then you in quick succession. I'm not sure why, but I began to wonder if you still miss Leslie Cheung the way I miss Leslie Cheung. I remembered that he'd died on April 1, 2003 and I was hoping that people continue to observe the anniversary of his death. How fortuitous that I decided to get up off the sofa-bed/floor and start randomly clicking around in "Webs of Signficance" at 2:58 am! Now I am comforted. I still have a lot of WOS reading to catch up on, though! G'night, zzzz.

Hope you're enjoying being in Singapore and attending the Singpore International Film Festival.

And yes, Leslie is still missed -- and I still name him as my favorite male actor when people ask plus listen to his CDs quite regularly. (A few musical favorites: not only the songs from HE'S A WOMAN, SHE'S A MAN and THE BRIDE WITH WHITE HAIR but also the English language "A Thousand Dreams of You.)

Anyways, hope you do catch up on your WOS reading but also continue to explore the archived section. Also, that you'll get to the e-mail I just sent you yesterday! :)