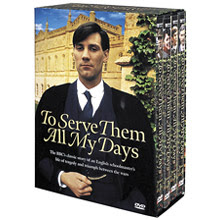 The DVD set of the mini TV series
adapted from my favorite book
I'm going to take a short break once more from my HKIFF film reviewing to provide an interesting, even if rather sad, update about the contemporary literary status of R. F. Delderfield, the author of the book I named a while back as the one that I can't -- or, at least, wouldn't want to -- live without. More specifically, here's seeking to draw attention to the following observations that were made in a blog piece posted yesterday over at Guardian Unlimited:-

As little as 25 years ago*, RF Delderfield was probably one of the most famous writers in the UK. His books sold by the truckload. They were subject to frequent television and radio adaptations and were read voraciously and repeatedly by a dedicated fan base.

Today, if you mention his name to anyone beneath a certain age, you're lucky to elicit even a shrug of recognition. Several of his novels are still available on Amazon, but they're rarely seen in bookshops. Unless you're specifically looking for them, the only place you're likely to encounter his books is at jumble sales, mouldering and yellowing away. His star is not just waning, it's all but snuffed out.

It's a curious and melancholy thought that someone so well known can be so quickly forgotten. Especially since he was well respected - and well loved - by those who read him. For Delderfield, who lived from 1912 to 1972, and who had more than 25 years of continuous fame following the success of his novel All Over The Town, was no hack. His sagas encompassed the sweep of world history, right down to the minutiae of British suburban life. By all accounts the books were well written and his pioneering sense of social justice and sympathy for his fellow man would strike a chord with many Guardian readers today.

But posterity has been cruel to Delderfield. It's hard to say precisely why near contemporaries such as George Orwell and Anthony Powell (to give just two instances) who Delderfield certainly outsold in his lifetime should since have outstripped him, but clearly they have...

*And come to think of it: It is more than 25 ago since I was first introduced to R. F. Delderfield's majorly absorbing novels... :S

On a cheerier note: should anyone wonder, as I did for a time post reading his truly superb To Serve Them All My Days, about the real life school that he attended and loved: I've latterly found out that it's West Buckland School; an education institution that's still going strong, apparently boasts a strong Cantonese-speaking contingent these days, and whose "old boys" also include author Brian Aldiss and triple jump world record holder Jonathan Edwards! :)

Authors who are popular often go 'out of style'and fade away for a generation only to be rediscovered by a future generation who consider them a classic writer of their time.

I would guess that R. F. Delderfield will be rediscovered and his works well regarded for the social history of the era they're set in.

I hope you're right that R. F. Delderfield will be rediscovered and his works well-regarded before too long.

Also, that I can play a little part in getting others interested in his works -- in particular, "To Serve Them All My Days" (which, almost needless to say, is better as a book than a TV series).

I first came became a fan of RFD
when I brought a copy of a Horseman Riding By at a second hand stall. I just had to buy A Post of Honour & The Green Gauntlet - the follow ups. I have seen his books in W H Smith (Where I brought 'To Serve Them All My Days).
I think one of his strengths is
that he makes his characters soud so realistic, eg Sump Potter & Ikie Palfrey.

Nice to "meet" a fellow fan of RFD.

I have to confess to not yet having read the "A Horseman Riding By" series -- only the Adam Swann trilogy ("God is an Englishman", etc.) and a couple of stand-alone novels along with "To Serve Them All My Days". Alas, it seems like I'd have to chance upon them in secondhand stores as they seem out of print. OTOH, I do have a copy of "Diana" waiting to be read...

I just bought a new copy of God is an Englishman published by Sourcebooks Landmark, 2009, in Barnes and Noble in Chico California. They also had Theirs Was the Kingdom so I guess RFD may be on the way back.

That's good news! And I have a copy of Delderfield's "Diana" that I'm saving for a rainy day. :)

Yes, times change and authors go out-of-fashion, which is why I don't get too excited over some of today's authors who are enjoying vast popularity and sales - I remember the early 1970s when Delderfield really caught on in the US with GOD IS AN ENGLISHMAN - everywhere you looked there were paperbacks by him (and others) featuring cover-art of rolling hills and bucolic country scenes with blue skies, and people on horses. Several of his books have been made available again in the US in paperback, and hopefully people are rediscovering him - he was, above all, a storyteller.

I'm currently reading THE AVENUE which, like a couple of other Delderfield novels, I've started several times over the years. I recently picked it up again on impulse, not expecting much. But this time was the ticket and I have less than 200 pages left. (I struggled with A HORSEMAN RIDING BY on and off and on and off, left off at page 570, and haven't touched it for a couple of years at least. I also stalled out with the second half of DIANA. Regrettably, an attempt at re-reading TO SERVE THEM ALL MY DAYS last year also failed - each page seemed to take an hour to read.

Another author who was well-known for decades and now causes barely a glimmer of recognition is Taylor Caldwell, and I've rediscovered her this year as well, first re-reading one of her best, TESTIMONY OF TWO MEN (which, fortunately, has been reissued) and then going on to read several that I'd started unsuccessfully in the past.

Louis Auchincloss was a very American author whose novels were centered on the world that he knew best--the Upper East Side of Manhattan, Wall Street, Bar Harbor--and who was popular decades ago. I started reading him at a time when I simply read everything--I think my grandmother had some book club editions of his short novels--and kept up with his work for a while.

He was like Delderfield in that he chronicled the social history of an era although Auchincloss's themes were narrower and and his subjects more limited. Unlike Delderfield he wrote short novels but he wrote a lot of them--about 30 novels, many volumes of short stories plus literary criticism and couple of biographies.

If he will be remembered by one novel it will be The Rector of Justin which was based on Groton, the prep school Auchincloss attended much like To Serve Them All My Days recalled to some extent Delderfield's days at West Buckland School.

Like Philip Swan I can recall when it seemed that everyone was reading Delderfield in the 1970s--riding the El in Chicago in during the morning rush hour one would think that the fat mass-market paperbacks with an American version of the English countryside on the covers were handed out on the train platforms.

Thanks for your comments and for supplying the dates for Delderfield's popularity in the US -- and helping giving me a clue how it was that I ended up finding quite a number of his books in secondhand bookstores in different parts of the US (notably Colorado).

And I've read Taylor Caldwell too -- but have to admit that his works didn't impact me as strongly as R.F.'s. (As an addendum, I recently finally viewed the TV series that are based on his "To Serve Them All My Days". Not too bad at all is my verdict -- with the actors playing Howarth and Algie being particularly wonderful, I thought.)

I have to admit to not having been drawn to the works of Louis Auchincloss -- though I did see quite a number of them for sale in bookstores in the US. Interesting comparison you made between his books and Delderfield's though.

Incidentally, perhaps the American books I connect with Delderfield's -- for their sense of documentary history but also general humanity -- are those of Louisa M. Alcott's. More specifically, for a link to "To Serve Them All My Days", how about "Little Men"? :)