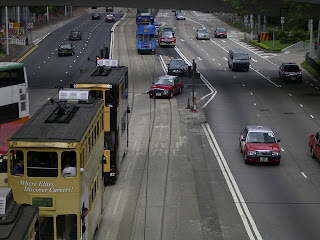 One reason why I love Hong Kong:
The high proportion -- and many types --
of public transport on its streets
(By the way, the traffic is less dense than usual
in this photograph because it was taken on a weekend!) 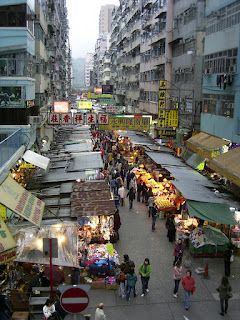 Something else that I really like about Hong Kong:
the profusion of colorful street markets and
associated pedestrian-friendly streets that are to be found there
As regular readers of this blog know full well, Hong Kong is a place I love. And while there is a part of me which wonders if one can truly say such a thing about a part of the world where one has yet to actually be a resident, another part of me feels certain that if one could, Hong Kong really would fit that bill for me.

This is not least because there really are so many things about the place that I like and admire. For example, and to reiterate once more, Hong Kong -- with such as its annual Hong Kong International Film Festival (HKIFF) and the excellent Hong Kong Film Archive that's open to the public throughout the year -- is "movie Mecca" for me.

At the same time, my love for things Hong Kong extends to what can appear to be the mundane: for instance, the very existence of its ultra-nifty Octopus Card, a great public transportation system, and the plentiful amount of street markets and other pedestrian-only or -friendly areas within that densely populated territory.

Except that, as a piece I only recently came across -- although it actually first appeared in cyberspace back in September of last year -- makes clear, it's taken quite a bit of thought, planning and implementation to allow the "Fragrant Harbour" to have the kind of exemplary public transportation and pedestrian-friendly set-up that it now does.

Even more surprisingly, its author was moved to note that as recently as "in 2001, there were few streets or districts that were comfortable to walk in or engage with despite being known as a bustling shopping city. [But i]n the intervening [five years or so] the city has undergone a major transformation led by none other than the city's Transport Department."

Consequently, "A city that once had almost no space for walking and where tourists, business travelers and residents dreaded its transportation system now has speedy and efficient mass transit and nice public spaces"; something which Learning from a Streets Renaissance in Hong Kong proceeded to show is really the case with wonderfully illustrative photographs along with well-reasoned points that I think many of you will find interesting reading. (Hence my deciding to try to draw the work to your attention in this post!)

yeah the Film Archive is simply a gem... unfortunately i could only spend a few hours in total there

if there's a similar one from where i come from, no prizes in guessing where i'll be spending the bulk of my leisure time at! :)

Isn't there something called the Asian Film Archive over in your neck of the woods?

It even has its own blog:-
http://www.asianfilmarchive.org/Blog/

All in all, it looks intriguing enough. OTOH, unlike with the HKFA, I've not visited so can't personally vouch for its excellence, etc.

I have only visited Hong Kong briefly when I was little. Didn't really make an impression on me. I would love to go visit it again. Nice photos.

I just started a new photo meme. If you want to participate go to the link below for more info.

Thanks re the photo compliment. To be honest, I'm not sure that these are particular nice photos. However, I put them in because I thought they would help illustrate the points made in my post (and the linked piece)! ;D

As for your new photo meme: Thanks for the invitation but, as I will disclose on the main part of the blog before too long, I'm not going to be able to commit much time to blogging for a while soon... :S

Hi ytsl, yes there is! But I don't think they have a venue that is open to the public where one can behave like a lounge lizard ;)

Have not actually visited the site, it's near the National University of Singapore, perhaps one day I should (if it's open to outsiders of course :D)

Aaah, yes, I see what you mean about the Asian Film Archive not having a venue of its own that's open to the public like the Hong Kong Film Archive has! Ah well...but some of the former's programs look interesting nonetheless. :)