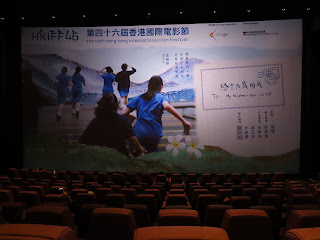 Before the film began... 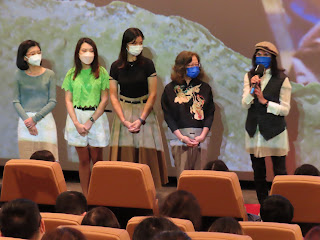 Director Mabel Cheung (at far right) and other people involved
in the making of To My Nineteen-Year-Old Self
To My Nineteen-Year-Old Self (Hong Kong, 2022)
- Part of the Hong Kong International Film Festival's Galas program
- Mabel Cheung, director
Back in 1998, Mabel Cheung co-scripted (with partner Alex Law) and directed a film that was based on her (and Law's) shared history of University of Hong Kong (HKU) students.  The decision to make City of Glass was sparked by news that the university's women dormitory Lady Ho Tung Hall -- which Mabel Cheung had been a resident -- would be demolished and rebuilt.
Close to 15 years later, sparked by the news that the secondary school she had attended was going to demolish its century old Mid-Levels campus, Mabel Cheung decided to make a film about this other one of her alma maters.  But while City of Glass was a nostalgic romantic drama viewed through rose tinged glasses, To My Nineteen-Year-Old Self is a documentary effort that comes across as clear-eyed, and all the better for it.
Spanning a period of 10 years, it follows a group of young Ying Wa Girls' School pupils from when they are Secondary 1 students in 2011 all the way up to their graduation and beyond.  And while all of these members of a historically high academic achieving educational institution do make it to university (where they presumably still all currently remain in 2022), their paths there were not without bumps in the road and they actually are a diverse -- and thus interesting -- lot personality-wise.
With regards to the bumps in the road: some of them are personal; others are generational.  After the screening of the film, a friend of mine confided to me that she felt sorry for the girls (and their generation of Hong Kongers in general).  As my friend put it: secondary/high school should be among the best years of one's life but these girls' time as secondary school students coincided with the Moral and National Education controversy of 2012, the "Occupy" phase of the Umbrella Movement in 2014 and the extradition bill protests of 2019; all of which are impossible for Hong Kongers to ignore.
Even one year before the Moral and National Education controversy occurred, I am sure that Mabel Cheung had little inkling this all would erupt when she was filming a documentary about secondary school students.  I'm sure too that she didn't think the period between 2011 and 2021 would be so eventful -- turbulent even -- in Hong Kong, and been able to forecast such as the tilt towards "localism" in Hong Kong politics in this period, and the horror and anger that has come to be felt against the police force that used to justifiably call themselves "Asia's finest" (but no more).
Otherwise, I think that she might/would have shied away from having a number of the girls whose trials and tribulations would be recorded on film be Mainland Chinese emigrants and one of them actually aspire all through her secondary school years to become a police officer!  But, actually (of course!), To My Nineteen-Year-Old Self actually benefits from having these individuals in the mix along with Hong Kong-born girls who, on their own, ranged quite a bit in personality and included a couple of student leader types, a "jock" (who went on to represent Hong Kong in various bicycle races even while at secondary school) and a rebel who dropped out of school for a bit but, nonetheless, ended up at HKU (in the footsteps of Mabel Cheung)!
To My Nineteen-Year-Old Self is clearly a labour of love for its director, who's revealed that she largely financed the project herself.  And in many ways, it's a tribute to her beloved old school: whose principals, both the current -- and first male in the position -- Francis Kwan but, especially his predecessor, Ruth Lee, come across as wonderfully caring educators; and whose ethos is admirable indeed, particularly since it appears to be directed at producing good human beings, not just academic achievers.
It's also a very watchable documentary; in large part because its subjects do come across as three dimensional humans, and interesting personalities whose development and coming of age we are privy to via To My Nineteen-Year-Old-Self!  There's little doubt that Mabel Cheung benefited from getting uncommon access to film them -- at school, in their homes and also elsewhere.  But she got this because she was trusted, not just because the girls were ordered to open up to her.  All in all, I think they recognized that she meant well for them as well as the school as a whole.  And we, the audience, are the beneficiaries of that.
"Time is precious, treasure every minute of it", is the school's motto.  And here's stating for the record that I value every one of the 136 minutes of To My Nineteen-Year-Old Self; and, like a number of audience members stated at the post-screening Q&A session I attended, I think it would be very interesting indeed if Mabel Cheung were to make a follow-up documentary following the now young women as they go about the next 10 years of their lives! :)
My rating for this film: 8
Posted by YTSL at 11:59 PM

I feel so out of step with rest of the world.
Coffee is on and stay safe

In what way? The world is large and diverse. I appreciate that you try to connect with more of it than many other people but I guess that when you do so, you will encounter things that seem very foreign to you! :D