Entertainment at the Hong Kong International Film Festival by way of "The Outsiders: The Complete Novel" and inspiration from "Navalny" 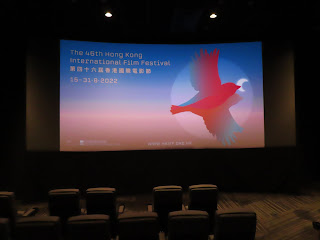 I was the first one to get into one of the screenings I attended
(Yes, the cinema did start to fill up soon after I took the photo!)
The Outsiders: The Complete Novel (U.S.A., 1983)
- Part of the Hong Kong International Film Festival's Restored Classics program
- Francis Ford Coppola, director
- Starring: C. Thomas Howell, Ralph Macchio, Matt Dillon, Rob Lowe, Patrick Swayze, Emilio Estevez, Diane Lane, Tom Cruise
My Hong Kong International Film Festival-ling last year began with a classic Hong Kong film.  This year, it began (this past Tuesday) with an American cult classic.  A 1983 coming of age drama set in 1960s Oklahoma, The Outsiders: The Complete Novel is based on a book by a female writer (S.E. Hinton) but has a cast that's mainly male as well as young -- and what a cast it is too!  But although Tom Cruise may be its biggest name, the superstar actor actually just has a small role in this movie.  Instead, it's C. Thomas Howell (as the quirkily named Ponyboy Curtist) and Ralph Macchio (as the often hangdog Johnny Cade) who have the most time on screen; with Matt Dillon and Patrick Swayze being the two other cast members who have the best opportunities to shine.
For the record: the version screened at the fest is the 2005 version that's 22 more minutes than the originally released version.  Clocking in at 116 minutes, The Outsiders: The Complete Novel doesn't feel padded at all.  Another sign of its watchability: this tale that centers on working class boys and young men who are self-styled "Greasers" (whose "natural" enemies appear to be the "Socs" from the other, wealthier part of town) never is boring; this thanks in no small part to the charisma of the actors as well as how their characters were written.
Initially, it looks like it'll be similar in style and substance to offerings like Grease but The Outsiders: The Complete Novel is actually a darker, layered film; with death coming into the picture on a number of occasions.  There's also a scene of great visual beauty and poetry that's memorable and meaningful, and scenes showing the boys' love for literature that reveals that the film's two main characters, at least, have surprising and uncommon intellectual and psychological depth.
For all this though, it's hard to deny that one big reason for viewing the film in 2022 for the likes of me was the opportunity to see so many big names when they were mere up-and-coming talents and so young than, in the case of Tom Cruise, their voices were noticeably higher than they are now!  To be honest, based on what I saw of them in this movie, I would have expected C. Thomas Howell and Matt Dillon to have had more stellar careers than they have ended up doing.  On the other hand, Patrick Swayze looked and was good even then -- four years before Dirty Dancing, seven before Ghost, eight before Point Break, etc.  And it is sad indeed to realize that he's been gone from this Earth now for some 13 years already.
My rating for this film: 7.5
Navalny (U.S.A., 2022)
- Part of the Reality Bites documentary program
- Daniel Roher, director
A couple of days before I viewed this enthralling, even gripping documentary about Russian opposition leader Alexei Navalny, I saw a 17 Tweet thread by him whose first one bore the line "Greetings from solitary confinement" which gave a chilling account of what his life is like, and how he's being treated, in the maximum security prison that he's currently incarcerated.  Reading it, I marvelled how it was possible for a man experiencing what he did to be able to keep his spirits up and write things like "It's okay, it can be worse" and "The commission is right: I really seem to be incorrigible" (the last followed by a "wink" emoji).  Navalny goes a long way towards explaining how this can be the case.
A CNN production that I wouldn't characterize as a puff piece, Navalny still does end up casting its subject in a favorable light.  But, in all honesty, I think this is due in large part to the man himself: who, at the very least, truly appears to not lack for courage, conviction and love for his country.  An individual who, prior to the making of the documentary, had already experience of house arrest and imprisonment, he also suffered a near fatal poisoning while Navalny was being made.  And yet, after getting treatment for the poisoning and spending time recuperating from the ordeal in Germany, Alexi Navalny voluntarily returned to Russia -- and into the arms of the authorities.
Early on in this documentary, its director, Daniel Roher (whose documentary short, Finding Fukue, I had previously seen and was touched by) asked the subject of his film what message he had for the Russian people in the event of his death.  Initially, Navalny declines to do this.  But eventually, he agrees to do so.  For me, the message he delivered -- with such evident sincerity and conviction, and while looking straight into the camera -- alone (which can be found here, more than by the way) is worth the price of the whole movie.
And I think Hong Kongers would do well to hear Navalny's message and apply some of it to their own circumstance too.  For my part, the following lines really resonated: "You're not allowed to give up... we are incredibly strong.  We need to utilize this power, to not give up, to remember that we are a huge power that is being oppressed by these bad dudes.  We don't realize how strong we actually are.  The only thing necessary for the triumph of evil is for good people to do nothing.  So don't be inactive"!
My rating for this film: 8.5
Posted by YTSL at 11:59 PM