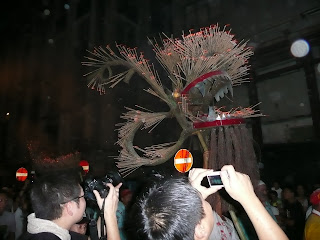 The head of the Tai Hang fire dragon... 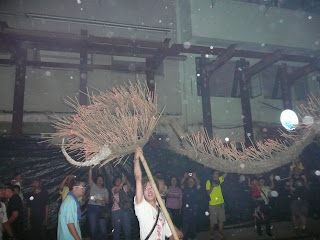 ...and the 67 meter long creature's tail end
Last night, I went to see the Tai Hang fire dragon. Last year, I had gone to get my first glimpse of the impressive creature and had a great time. Unfortunately, the camera I had with me then was only able to capture traces of the beastie's light rather than the dragon itself. But now that I've got a new and seriously more technologically marvelous camera... viola, check out the above two shots of the seriously fiery phenomena that I managed to take this time around (albeit with lots of mysterious white spots appearing on them :S)!

This year's visit was made enjoyable due in no small part to my having gone with a German friend -- who has lived in Hong Kong for five years now but had not as yet visited Tai Hang -- and her German colleague who was visiting Hong Kong for the first time. It's not just that I felt like the veteran who could show them the ropes with regards to checking out the Tai Hang fire dragon but, also, that they enthusiastically embraced my -- and many locals' -- practice of chasing after the dragon as it made its way through the streets of Tai Hang (rather than just passively stake a place among the crowd and wait for the dragon to pass by).

Imagine, if you will, the thrills and movement along with sound of drums rhythmically beating the way, the powerful smell of incense along with clouds of smoke emanating from the ancient beastie, and an excitable crowd of happy people running, not just standing, around -- and you'll have imagined the atmospheric scene that was the case last night (and tonight and tomorrow, as the fire dragon dances for two more nights before calling it quits until next year)!

At one point, we misjudged the path of the dragon and rather than running after it, found that it was heading our way. As the German friend excitedly noted a bit later, "until tonight, I had never seen, never mind chased and be chased by, a dragon!" Alternatively put: Much fun was had at Tai Hang last night.

(And this, amazingly, within 24 hectic Hong Kong hours that also involved my attending a jazz gig the night before, viewing Akitsu Springs (Japan, 1962) on Saturday afternoon and then going and watching Arsenal beat Blackburn Rovers 4-0 on TV in a Tai Hang bar with a couple of fellow Gooners. Oh and do more regular stuff like take part in the weekly Photo Hunt once again, etc. too! Small wonder that I'm content to take thing easy today... at least until this evening when I go watch another classic Japanese movie; this time courtesy of the still on-going Summer IFF! ;b)

That sounds like great fun to chase the dragon!

Are those incense sticks on the dragon?

Wow, what a great life you're living in HOng Kong. Your dragon chasing and being chased sounds like so much fun!!!!

Yes, indeedy -- re both your comment and query. :b

Yeah, life in Hong Kong is great. I just worry that I'll get exhausted but no worries re there being nothing to do here! :)

Exciting!! the one I photographed can be carried by one person, so it's much smaller but just as fun.

So cool to see Fire Dragons all over the world, ain't it? ;b