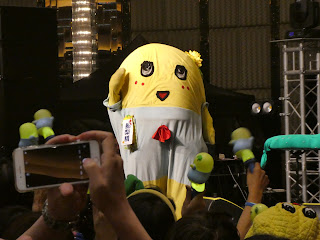 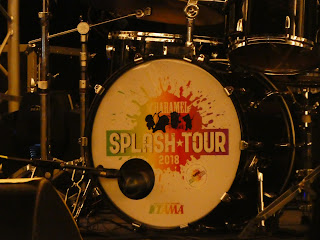 The Pear and its band made their Charamel Splash Tour 2018
international with a concert in Hong Kong :)

A little over two years ago, the unofficial mascot of Funabashi (a city in Japan's Chiba prefecture) came to Hong Kong for a couple of "meet the fans" events at the Hong Kong branches of Wired Cafe.  That was the first time I got to see Funassyi in the flesh (so to speak) -- and even get high fived by my latest (and still enduring) Japanese object of adoration.

Almost needless to say, those sightings (and brief encounter) got me in Seventh Heaven even while I got to thinking that would be the first and last times I'd ever get to see the Pear in real life (rather than, say, Youtube videos and photos uploaded onto the internet).  As it turns out though, after not leaving Japan to go anywhere else in 2017, Funassyi returned to Hong Kong yesterday and was the star of an absolutely fantastic concert at KITEC this evening.

Having seen and heard Funassyi and its band (Charamel) perform in Youtube videos and a concert DVD, I shouldn't have been surprised that the Charamel Splash Tour Hong Kong concert really genuinely rocked.  It's not just that the music served up by the Pear and its friends (namely fellow regional mascots Nyango Star, Kapal and Akkuma) was enjoyable to listen to but it also actually got the concert's attendees happily bopping away.

Although the Pear itself had wondered whether the concert would attract actual Hong Kongers, the attendees did indeed include Hong Kong residents along with a number of Japanese Funassyi fans who had flown over expressly to support the Pear.  In recognition of this, the multi-lingual mascot (who also can speak Mandarin!) made the effort to speak in English as well as Japanese throughout the concert and periodically asked the crowd if it was feeling happy (in English) and genki (in Japanese).

If it saw my face, it'd know for sure that I, for one, was thoroughly enjoying myself as I found myself grinning from ear to ear throughout the very upbeat and energetic concert.  And I could feel my heart swell when, towards the end of the concert, the Pear said "Thank you very much, I won't forget you, Hong Kong" (in English).

For the record: the concert was not a sold out show but I think there was a high enough attendance to make it all respectable, and encourage the Pear to return to Hong Kong for more events.  In addition, my pictures can't do it any justice as photography was not allowed during the concert.  Happily though, I was able to snap some shots of Funassyi this evening as, after the concert officially ended, the star of the show came out to say "hello" and "thank you" once more; something that's particularly appreciated since I'm sure the Pear was pretty exhausted from its considerable efforts by then. :)