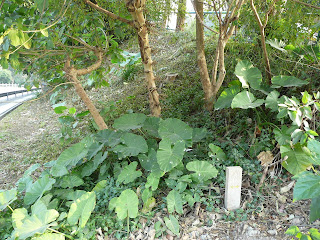 Not the most noticeable signpost in the world 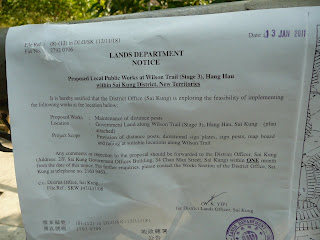 Well, it's about time!!!
Earlier today, I went hiking along Stage 3 of the Wilson Trail, one of Hong Kong's four major long trails along with the Maclehose, Hong Kong and Lantau Trails. Named after one of Hong Kong's former British colonial governors, the 78 kilometer long trail has attracted some criticism on account of many hikers finding the sign posts along it unclear and full of errors.

After reading Neill of Diving Thoughts' account of his hike along Wilson Trail Stage 3, I was prepared for some problems with the trail signage and consequently added an extra hour into the official hike time for just in case. But while my regular hiking companion and I took extra care when looking out for signs to guide us and were able to complete the hike safely before the sun went down, we experienced our own frustrations with the signage along the way -- not just because there was a troubling lack of signs where we could have done with them (e.g., at places where paths divided) but also upon encountering lots of signs where we didn't need them at all (including along sections of the trail where there were no other alternative routes in sight).

A few kilometers along the trail, we encountered an official notice that the Wilson Trail's signage problem has been noticed and steps finally are going to be taken to help remedy the situation (cf. the second photo above). Our reaction? Hell, such actions are long overdue -- considering that construction work on the trail began in 1994 and it was first opened to the public on January 21, 1996 -- some 15 years ago now!

And in the off chance that the officials entrusted with putting up new signage read this and welcome our advice: PLEASE put trail signs around regular people's eye level rather than close to the ground like has been the case to date!!! Also, please make the signs more prominent. As it is, one such as that near Tseung Kwan O Road (see the photo at the top of this entry) are barely visible even from a meter or so away!!!!!

So, I can foresee some readers asking, why -- even though I knew to expect some problems with the signage -- did I elect to go along this particular hike? Because this hike that takes one up and down a few Eastern Kowloon hills (notably 222-meter-high Devil's Peak, 302-meter-high Black Hill (AKA Ng Kwai Shan) and the unnamed -- and actually most difficult to hike up and down -- 281-meter-high hill in between) offers up panoramic vistas galore, a visit to an old fort that had a prominent part to play during world war two, an area where interesting statues galore have been erected and more.

In other words: Yes, the trail is most definitely worth hiking; just make sure when attempting it to bring a map and guide book with you and even then be prepared for some frustration -- of the sort that can lead one to vandalize existing signage (as at least one hiker before us had done) -- and puzzlement along the way! :S