Views of another side of Hong Kong 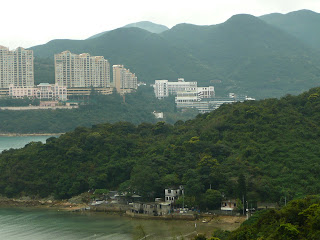 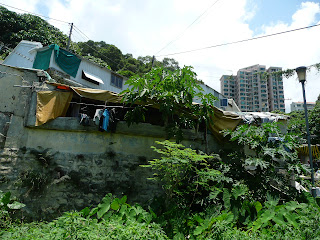 Squatter type homes and way more expensive housing
also located not too far away from each other --
this time over in the Discovery Bay area of Lantau
As regular visitors to this blog may have noticed, I generally try to highlight the more positive and/or fun parts of life on it. Every once in a while, however, I do feel obliged to share my thoughts about less happy times and aspects (e.g., here and here). This time around, my impetus for writing this blog entry stems from two incidents that happened back to back this morning while I was waiting for the bus I regularly take to work.

The first involved my observing an old man scrounging about for useful scrap from a rubbish receptacle nearby -- in broad daylight on the side of a busy street full of pedestrians as well as vehicles passing by. After he did so, he looked up and -- perhaps it's my imagination but I thought the expression on his face was one that showed that he definitely wished that he wasn't reduced to having doing this but, at the same time, was one that defiantly dared anyone to stop him from doing so and, also, from disapproving of his doing so.

Seeing that man, his actions and the look he gave out to the world at large prompted me to comment to a colleague who was waiting alongside me for the same bus that it really made me so sad that so many older people are obliged to scrounge about for scrap to get by here in Hong Kong -- a place with the world's fastest growing millionaire population (at least according to a June 2011 Wall Street Journal blog post) and 527,000 millionaires out of a population of around 7 million (as reported last month) but, also, a major wealth gap that is increasingly a cause of serious concern.

Her response really shocked me -- even more so, actually, than my witnessing the older man's scavenging activities. For she really did seem sincere in her stated belief that some of these older Hong Kongers who are too often seen going about scrounging in rubbish receptacles are doing this not to help make ends meet but, rather, because it's something to do to keep them from being bored!

After hearing her comments, I am moved me to wonder if she knows that there are still people in Hong Kong 2012 whose economic circumstances make it so that they have to live on the street or in caged homes or seriously ramshackled dwellings. On the one hand, I find myself thinking that people surely can't not know that there are poor people who are finding it hard to live and grow old in comfort and with dignity here. But on the other, I also truly have met people over the course of my life who can be blind to -- not just callous about -- the poverty that exists in their midst or just around the corner or next bend.

To be sure, it is extremely rare to see people dressed in rags in Hong Kong the way that I have seen people doing so in Tanzania. And I've not heard any real life tales of people having starved to death -- although if they could do so in Japan earlier this year, there surely is the possibility of there people doing so here too in "Asia's World City". Still, just because it's less visible or extreme, it does not mean that there are no poor people here -- only many of the poor, including the elderly among them, actually still feel they should be doing something to earn some money as opposed to "just" begging from strangers, relatives, the government or some other wealthier source.

The willingness to work even in one's old age is something one has to admire even while also thinking should not be considered a necessity. And should anyone wonder, yes, I do make contributions to charitable organizations like the Society for Community Organization (SOCO) and the Salvation Army. Also, yes, I really do wish and hope that society -- including Hong Kong's -- can become more economically equal and also more caring in the future than it currently is.
Posted by YTSL at 9:44 PM

Interesting contrasts in the two photos there. Is the first photo overlooking the Tai Tam bay area towards stanley? Some of those 'poor' dwellings are actually just very old abandoned/semi abandoned village houses since the inhabitants moved away.

Re the first photo: close guess -- it's overlooking Tai Tam Harbour looking towards Red Hill. And ya, I do believe that some of those dwellings are abandoned/semi-abandoned -- but they still do look poor to me!

It's like when I went on the Lung Yeuk Tau Heritage Trail. Entering a walled village with some really traditional (and, frankly, uncomfortable looking) dwellings, I wondered who still lived there... whereupon a definitely not financially well off sanitation worker walked by and into that place.

Ohh no wonder u mentioned Mui Wo!! Hey there's an online photo comp coming up I think early apr onwards to may, aimed at raising awareness of poverty in HK, you should totally join, I think a lot of the prizes are for cash and amount also not bad... But they were going to target mainly local HK so I think the main marketing is in Chinese... I cannot read :P I only know bout it cos my mummy friend works for the foundation who's doing it..

Hmmm... that wasn't the reason why I mentioned Mui Wo on your blog but funnily enough, I did take that Discovery Bay photo on a hike that took me from Discovery Bay to Mui Wo!