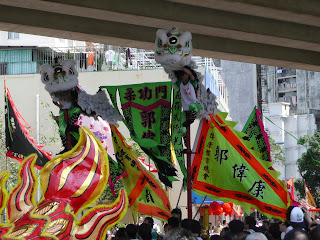 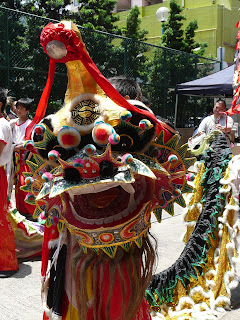 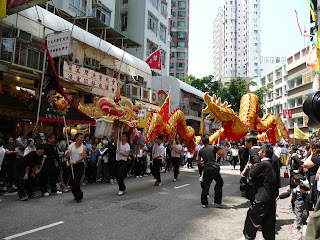 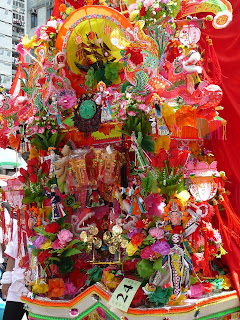 Yesterday (Friday the 13th, more than incidentally!) and for much of this morning, I was wondering whether I'd be able to take part in this week's Photo Hunt because Blogger went wonky (doing such as not allowing new posts, making me think I had accidentally deleted a recent blog entry and somehow having my first name appear in place of my initials in the "posted by" spaces of my blog!). And this even more so after finding that my post on the Fringe Club as Hong Kong landmark and movie location had been restored as well as an official Blogger is Back announcement but (still) not (yet) the online home of Photo Hunt founder, tnchick.

However a spot of Googling yielded the information that tnchick's online base can now be found here (and, actually, not so old posts still here too). So eureka re not having to miss this week's -- ironically, enough -- missing/missed-themed Photo Hunt!

In the celebratory spirit, here's posting up four photos taken at a parade of "unicorns", "lions", "dragons" and more to commemorate the Birthday of Taoist god, Tam Kung, one of three festive events that are celebrated on the same day each year (on the Chinese lunar calendar's eight day of the fourth moon) here in Hong Kong. And for the record, yes, this day is a public holiday in the Big Lychee.

Unfortunately for me, however, I'm one of those people who has to work on public holidays (unless they fall on weekends -- since I am at least fortunate enough to now be in a job where I have a five day week). So this year, as with last year, I missed being there for the the Birthday of Tam Kung celebrations which I had so enjoyed attending in 2008 and 2009 (when the festivities had taken place on a weekend).

More than incidentally, the Birthday of Tam Kung celebrations (which center in Shau Kei Wan) tend to be overshadowed by the Cheung Chau Bun Festival held to thank fellow Taoist god Pak Tai on the same day in the year. So much so that there are many Hong Kong residents, never mind tourists, who aren't all that familiar with the annual festivities at Shau Kei Wan.

I, on the other hand, have yet to attend to go to Cheung Chau for the bun festival -- even while I also have been to that charming island a few times (including on the Sunday before festival day last year). One of the recent I've been not completely unhappy to have missed attending that festival thus far is because friends who have attended have complained about the super crowded conditions at the bun fest. At the same time though, I do feel that I have to go one year... otherwise, I'll have forever missed some important part of the overall Hong Kong experience that I so love for its variety, general color and helping instill a sense in me of being truly alive. :)

I see that my Google interface is now messed up. What on Earth is going on? Very annoying.

However, as usual your post is informative and delightful! I haven't been to see an authentic Chinese parade but one of my favourite things to do is go for Dim Sum on the Chinese New Year (or, for that matter, any other time...). I love Chinese foods (not the "western" Chinese food that many restaurants and take-outs serve here. The REAL food.

And, my Blogger blog is up and running but the Photo Hunt one is still down. Annoying.

I am awed by the amount of festivals in Hong Kong. I definitely have to attend the bun festival. It sounds so interesting.

Nice pics. I caught the Tam Kung parade for the first time this year. There's an interesting ritual where the police halfheartedly try to clear the street while spectators repeatedly slip through the tape and dart beneath the dragon (for good luck, I'm told). Being from the US I was worried the cops were going to start tasering people!

the bun festival sounds intriguing and if you look forward to attending one, I hope you'll share it with us.

a bun festival sounds like it is up my street! I wish we had more celebrations here in London. or made more of the wonderfully quaint ones there are.

At one point yesterday, I was wondering if there was a Friday the 13th computer virus about... Maybe not quite but still... :S

Funny re your eating dim sum on Chinese New Year. It's one of the times of the year that I *don't* go for dim sum! (Instead, in Malaysia, there's too many visits to see relatives and family friends to do while in Hong Kong, the Chinese New Year holidays is often a great time to go hiking with expat friends!) ;b

Have you watched "My Life as Mcdull"? I think you'll find watching the movie adds a fun spin to ideas re the Cheung Chau Bun Festival. :)

Glad you like my photos, Jim. And haha re your idea of tazering policemen -- I laugh because it does sound so unlikely in Hong Kong! :D

You mean if I ever go to one? Sure! In the meantime, would recommend checking our Mr Bijou's blog for photos from this year's fest. :)

How's the Notting Hill Carnival in London? It sometimes sounds fun, and other times like it might be too chaotic for my liking! ;S

Sorry you had to miss the celebrations. I've been to a couple in Malaysia, and we have a Chinese New Year parade here every year (where I live in the UK) as we have quite a big Chinese community.

Great photos!! And glad everyone seems to be back on Blogger.

Hi YTSL, :) I had to smile while reading your post. It is funny that yesterday was Friday the 13th and that the theme is missing at a time when some of our posts went missing on blogger.

I love your festival photos. When I travel I feel so lucky when I happen to be there for a local festival. I always join in the tradition every chance I get. Hope the next festivals lands on a weekend for you.

I miss the new year goodies...have a great weekend!

Help VOTE for my PHOTO ENTRY

I wouldn't like to miss such colorful festivals!!
The blogging world was truly annoyed yesterday...

Is the Chinese New Year parade in the UK in London's Chinatown? Used to visit when I lived in England for char siew fan, dim sum and, also, good Vietnamese pho! ;)

In a way, it was a bit of a relief that the problems affected other (Blogger) blogs, not just mine... Notice that there are some problems with those Blogger blogs that have non-blogspot URLS. Hope things can get back to normal for *everyone* soon.

One of those strange coincidences in life, right? ;)

And thanks for your good wishes re festivals and me. :)

Sorry can't vote for you because... I'm one of those people who still refuses to join the world of Facebook! ;O

I think the blogging world was more perplexed and frustrated than anything. A super slow connection OTOH... now that can get me annoyed! ;O

Good to be back. Great shots. Loved all those festivals when I lived in Asia. Have a great week.

Thank goodness that everything seems to be falling back into place in the photohunt world. *smile*

Have a good week.

Re: the google mess up... it just takes a few minutes to import your blogger blog to Wordpress.com.

Half the time I visit here blogger won't let me leave comments.

Love these colourful photos! It is very rainy and dark here, and thinking of festivals and parades have cheered me up :)

Happy to see you were able to play along this week and Blogger has fixed itself.

I dropped into the Chinese New Year celebration by coincidence in London, it was wonderful. It's in Chinatown each year!

I especially love the community-specific festivals here in Hong Kong. :)

It sure is nice to not have to endure an enforced non-Photo Hunt week. :)

It seems that the two favorite free blog systems are those of wordpress and blogger. I think there are merits to each one -- and also know there's one nice blogger widget (the one that allows one to show updates of blogs on your blogroll on your blog) that there apparently is no equivalent of on wordpress... :S

It's been on the rainy side here too -- but I'm kinda glad for once because it's made the air cooler so that tonight, I won't need to switch on the air conditioner! :)

The funny thing is that Hong Kong is actually quieter than usual during Chinese New Year -- because many shops close as people want to celebrate rather than work! :b

Love these colorful photos! I'm glad that Blogger revived so that you and others didn't have to miss the "missing" theme!

I know there would be a lot of things I would miss.
Photo hunt.

I have ask in first picture in dragon are they some type of camera?

Interesting, I've never heard of this celebration before. Sorry you missed the fun!

Mine is here in case you want to check it out.

Great photos, it looks like a lot of fun!

Thanks and hear, hear re the joy at Blogger's revival!

Sorry, I'm not quite sure what you're getting at. I.e., I can't see any cameras in the picture, never mind the lions! :O

Tam Kung's a very local god and the Cheung Chau Bun Festival a very local festival -- so can understand that you've never heard of them... until now. :)

Thanks and hope it was the case for you too. :)

It definitely was a lot of fun for me -- and I get the feeling the participants, not just the spectators, enjoy the Tam Kung Birthday parade too. :)