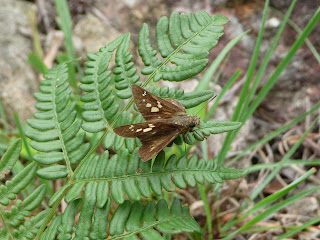 An insect known as a skipper
whose shape looks closer to a fighter plane's
than any other one I've seen before! 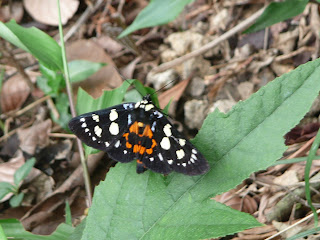 One of the most prettiest butterflies I have ever seen
(especially in flight) -- and that I saw for the only the first time
ever this afternoon (and wish I had a better photo of!)
Another Sunday, another hike. This afternoon -- one whose weather was predicted to be fine but hot (with a maximum temperature of 31 degrees Celsius) -- saw my regular hiking companion and I going along the Shek Pik Country Trail that had been announced as having been permanently closed a couple of years ago due to landslide damage caused by a typhoon but ended up being re-opened last month.

One reason for this choice of trail to hike on today was because the route (from Ngong Ping down to the side of Shek Pik Reservoir) promised to offer views of the third largest reservoir in Hong Kong and other parts of Lantau from different angles then I had hitherto seen them. Another was that the path has been described as passing through wooded areas that I imagined would have lots of trees offering up welcome shady covering.

As it turned out though, the sky was actually pretty overcast for much of our outing -- so we didn't need that much tree cover and the views weren't as photogenic as we would have liked. Still, it wasn't as though that wasn't much that was interesting to look at over the course of our hike; only, instead of panoramic vistas, my regular hiking companion and I found our attention frequently turning towards all manner of critters that we saw flying about in the air, crawling, hopping or moving about in other ways near and at ground level, at rest on leaves and such, etc., etc.!

Among the creatures we spotted along the way were praying mantises, spiders, grasshoppers, cicadas, moths and something that scurried across the path so quickly that I couldn't identify it... though I will vouchsafe that I had initially thought it was a large rat, only it had a much longer tail than I'd expect a rat to have! But due to their sheer beauty, some of the more colorful as well as larger of the around 240 species of butterflies that are to be found in Hong Kong were the absolute highlights of our insect spotting-filled outing.

One of the more surprising things about hiking in Hong Kong is how diverse can be the wildlife on view. As an example, I observed to my regular hiking companion at one point in the afternoon that we had caught sight today of at least five types of butterflies for the first time ever -- and this despite my coming close now to completing hike number 100 in Hong Kong and her having lived and hiked in Hong Kong for even longer than me.

To sum it all up: when hiking in Hong Kong, it frequently can be visually rewarding to not only gaze out at the distant scenery but, also, check out what interesting sights may be closer at hand. At the same time, it also is highly recommended that one does pay attention and look down to see where one is walking on -- especially on the trickier bits of paths that sometimes skirt pretty close to mountain edges, like was the case for stretches of the Shek Pik Country Trail that, overall, we decided may be easy in terms of exertion but nonetheless is somewhat more demanding of a hiker's care and attention than some might think!

Hi YTSL! I love that first pic. It practically pops out of my computer screen. Who needs 3-D movies, when such visually enthralling life can be found all around us.

BTW, one of my coolest bug encounters while hiking was coming across an ladybug nest. There were thousands of them sheltering underneath a log!

It looks like your season is a little head of ours.
I went out look for fiddleheads the starting of ferns.

Who needs 3-D movies, indeed. I'm one of those people who prefers my movies in 2-D -- especially since watching 3-D movies means having to wear a pair of glasses on top of my usual pair of glasses!

And woah re your coming across a ladybug nest: I like ladybugs but a whole nest worth could be on the freaky side to come across! :O

Wouldn't be surprised if that were the case. And have to say that I wish spring didn't last for such a short period only over here... ;S


After reading your skipper link I read some more about them. Interesting and creepy.

The skipper and the black bug with the red raised circles(May10th Central & Northern Lamma Island entry) make me think Hong Kong has some very interesting insects.

Absolutely re Hong Kong having interesting insects -- and I have to say that I really do love the variety as well as general beauty of the butterflies I see here in particular. :)