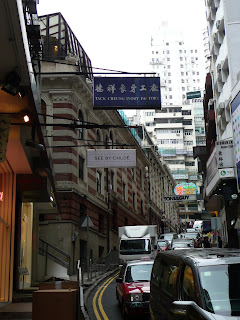 Recognize this brick and stucco striped building
from its appearance in more than one Hong Kong movie? 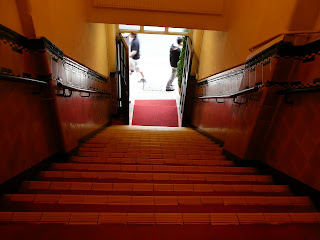 This stairway within that building has featured in at least
two movies I rate highly (i.e., He's a Woman, She's a Man
and, more recently, Beast Stalker)

This blog entry was inspired by two recent events. One of these was the decision by Hong Kong (& Macau) Stuff's Phil (AKA Oriental Sweetlips) to start a blog dedicated to recording Hong Kong (and Macau) film locations while the other was a conversation with a friend about our favorite Peter Chan Ho Sun films that segued into how we both had recognized with a start about entering certain sections of the Fringe Club that it had had served as the location of many a scene in He's a Woman, She's a Man -- my favorite film of the filmmaker who happens to be one of my favorite interviewees of all time (not least because after I stopped my tape recorder and officially ended our interview, we proceeded to talk amovies for another one and a half hours just for fun!).

For those who are unfamiliar with the establishment: the Fringe Club occupies part of the Grade II heritage-listed Old Dairy Farm Depot (with the other part of the building being home to the expat journalist hangout that is the Foreign Correspondents' Club). And although it has the word "club" in its name, one does not have to be a member to check out the visual and performance arts shows that take place there -- or do such as go get a drink and chill at its rooftop bar (where He's a Woman, She's a Man Wing fell asleep while waiting to go for the fateful audition during which she met Sam and Rose, the man and woman she had thought of as the perfect couple).

One floor below lies the Rehearsal Room, a space that's not open to the public but which I got to enter a couple of times to do such as interview Peter Jordan, the director of Ho Chi Minh in Hong Kong, a 2008 theatrical work produced by the Fringe Club. And I have to say that I did manage to keep my cool even while I realized with a start midway through my interview with the director who I first interviewed about the Chung Ying Theatre's production of Cyrano de Bergerac that I was in the room where the funny audition scenes of He's A Woman, She's a Man had been filmed!

To get to both the Rehearsal Room and the Rooftop Garden, one has to walk up a series of stairs that includes that in the second photo at the top of this blog entry -- the same one where Leslie Cheung walked up in a scene from He's a Woman, She's a Man and, close to a decade later, Nicholas Tse chased after Nick Cheung after the latter's character had abducted Zhang Yingchu's character's daughter.

And down on the ground floor of the Fringe Club can be found yet another He's a Woman, She's a Man location. More specifically, the Fringe Gallery -- where I've spent evenings doing such as listening to jazz bands play -- was where Sam (Leslie Cheung's character) enjoyed jamming and performing songs including a lively version of Twist and Shout! with his band.

Should you wonder: yes, I do often think of He's a Woman, She's a Man when I'm inside those parts of the Fringe Club I've mentioned above even while it's also true that I've also come to have many good non-movie memories of those spaces over the years. And it's places like these that really do give me the sense that I'm in a giant movie set when wandering around Hong Kong -- and maybe sometimes in a movie too! ;b
Posted by YTSL at 11:04 PM

Hi YTSL - many thanks for the mention. I'll still keep up the other blog but feel the film locations are better served with their own dedicated spot.

In the meantime, I'm still waiting for some posts (and a comment from you) to be restored following the service issues over the last couple of days.

You're welcome re the mention. Just wish this post hadn't gone missing for so many hours -- really, blogger made me think I had gone mad and absent-mindedly deleted the entry!

Wow. Great post, YTSL. I haven't seen that film in ages but I do recall some of the scenes you spoke about in the post. Thanks for the trip down memory lane. =D

Thanks for your positive reaction to my post and you're welcome re taking you down a trip down Memory Lane. :)

Fun entry and as I was reading it was fun to remember the scenes from the Leslie Cheung movie. Did you run up the stair with your boots untied?

I think I'd risk tripping and falling if I ran up the stairs with my shoelaces untied! OTOH, Leslie wasn't running in that scene either! ;b