Heidelberg on the Neckar (Photo-essay)

After spending my first one and half days getting used to the six hour time difference from Hong Kong in areas of Germany that are off the beaten tourist track, it was decided that it was time that I should head off to the historic university town of Heidelberg. The way my German friend had things planned, we would spend approximately two days in the town (and one night at the abode of two of her long-time friends and their two children), with a half day excursion up the scenic Neckar River thrown into the bargain.
With so much to see and do in Heidelberg, I was most agreeable to the idea of a trip to this famous city being more than just a day excursion. And this even more so when it turned out that after a rainy first day, the weather changed for the better and offered up bright blue skies that made pretty much everything seemed so much more beautiful than it previously was.

At the same time though, as I think you will agree after viewing the following photo-essay, the sheer beauty and attraction of Heidelberg shines through even on a misty, rainy day. Indeed, perhaps that kind of weather only added to the romantic feel of the place -- one that is intimately associated for people like my mother with the romantic musical of yesteryear entitled The Student Prince... 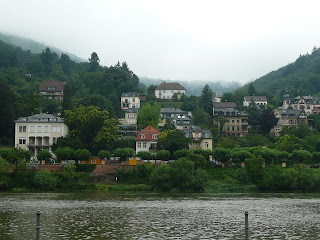 My first, mist-filled photo of Heidelberg --
more specifically, one of its sections north of the Neckar river 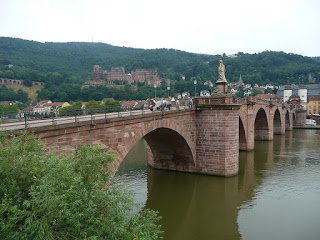 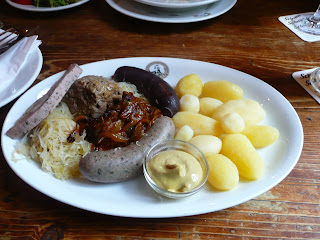 ...something that my friend and I opted for,
albeit only after a seriously hearty lunch repast
in a biergarten that also offered up a truly fresh glass of beer! 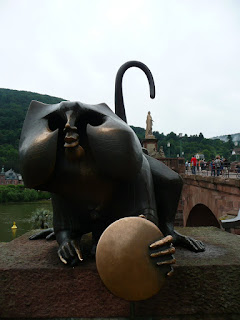 A few animal sculptures can be seen on the south side
of the bridge, including this famous bronze monkey 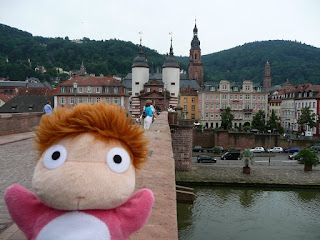 However famous it may be though, my Puppet Ponyo
(who, yes, accompanied me to Germany!) surely has it beat
for sheer kawaii-ness and on the cuddly quotient! 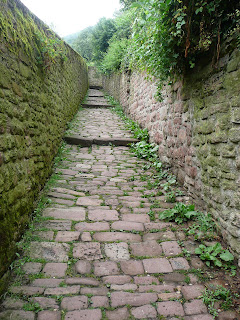 Now for the (relatively) hard part: a climb half-way
up a hill to the Philosphenweg (trans. Philosopher's Walk) 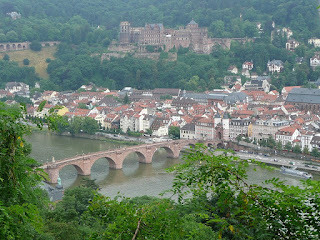 Following in the footsteps of the likes of Goethe and Hegel,
one is treated to lovely views of the southern section of Heidelberg,
including its castle on a hill, along with the old bridge 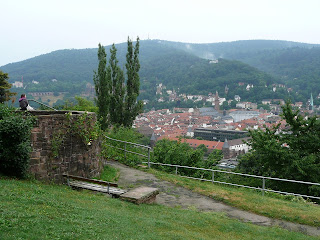 A woman who my imagination posits to be
a latter day philosopher-student leisurely surveys
(and contemplates?) the scenic vista in front of her

Looks lovely... almost like a fairy tale. Believe it or not, my first thought on seeing the city was where are the skyscrapers?!

BTW, do you style Ponyo's hair? It looks especially perky now compared to past photos. ;p

Delightful images which are just what one has come to expect in hour photo-essays but I was surprised that you were able to walk around Heidelberg--or even move much at all--after that very heavy looking but not untypical German lunch.

What a charming looking city. Interesting cat sculpture. Were there others in this style?

Must say that I didn't see any skyscrapers in Germany -- at least, no anything I'd consider one after living in Hong Kong!

As for Ponyo's hair: er... I have THREE Ponyos... and don't style *any* of their hair! (Put another way: did you confuse Puppet Ponyo with Stress Ponyo, by any chance?!) :DDD

Must say that I was surprised I managed to eat everything on that plate -- but I really did. And then could move afterwards! ;D

Ummm... it's a monkey, not a cat! And while there was nothing else in its style, there were two small mice near it...:D

Ponyo did very much enjoy herself in Germany but I think I enjoyed the beer there much more than her though! ;b

Yes, I did confuse the two, since I've not yet had the pleasure of meeting Puppet Ponyo. BTW, what is the name of your third Ponyo? And are you planning on adding another to your family? ;p

My third -- actually first (since I had it first) -- Ponyo is Pirate Ponyo (aka Pohyee). Her first name comes from her being clearly a pirated Ponyo since I got it from a roadside stall here in Hong Kong for only HK$20. (Ironically though, she's the softest to the touch of my three Ponyos!) Her second name is what Ponyo is known as in Cantonese...

And hmmm... I'm happy with my three Ponyos but if I see another nice looking Ponyo some time... ;b

Like sbk I also thought "cat" when looking at the photograph of monkey sculpture. The etched whiskers did it for me.

Interesting that Heidelberg has had a bridge monkey (Bruckenaffen in Germany?) for centuries but Ponyo adds some pizazz to it as well.

Teeheehee... and something else about the monkey you might like to know about: it's designed so that you can put your head into it! Saw a (Mainland Chinese) tourist do just that when I was there. :D

And thanks for being yet another person showing so much love for Ponyo. :)

Aaaargh!!! And you brought your ponyo there. Did Ponyo turn into a girl in Germany?

Yes, Ponyo went with me on my recent German vacation. And she IS a girl -- a girl fish, that is! :D

A belated Welcome Back.

Heidelberg is beautiful. I don't think of visiting it and it is nice too see the photos of it. I also thought it was a cat statue although I noticed on a second look, the hand holding the circle.

And Ponyo looked like she was enjoying her visit to Germany.

I enjoyed my time in Heidelberg -- and didn't think it was as tourist infested as some accounts makes one fear. And yeah, Ponyo enjoyed herself in Germany alright! :b