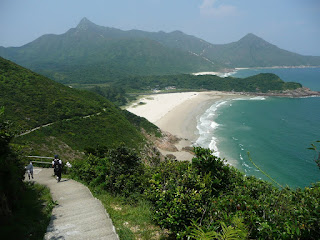 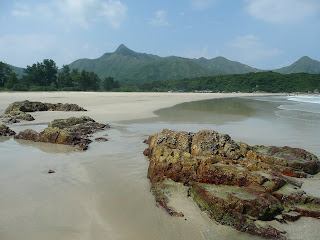 ...and this even more so when one gets down
to the beach and spends time strolling on it and
cooling one's tootsies in the waters that lick the shore!
Earlier today, I went on a hike in one of Sai Kung's two country parks during which I skipped over what I thought was a section of black hose, only to belatedly discover after my hiking companion shouted aloud and it started slithering away, that it was the largest snake yet that I've seen in the wilds of Hong Kong!

That scary moment aside, my biggest fear this afternoon was the prospect of suffering from heat stroke -- seeing as the temperature rose up to 34.9 degrees Celsius in parts of the territory today, and the hike involved going up as well as down a couple of hills.

If truth be told, this is not the kind of hike I'd go on in the summer... but tempted by the prospect of going to yet another great long and not particularly populated beach in a scenic location along with the enthusiasm of a friend who has long wanted to check out the place, off we went to Tai Long Wan -- specifically the beaches of Ham Tin as well as Sai Wan.

Ironically, my friend -- whose plans included a swim as well as a hike this afternoon -- discovered that Tai Long Wan (Big Wave Bay) lived up to its name and the waters were too rough for her to comfortably swim there. On the other hand, I was happy enough walking about on the beach, including on those bits where the waves were alternately creeping up on and then leaving to dry -- with a bonus bit involving spending time having a "just what the doctor ordered" ice pineapple drink at the little budget eatery that comes with piped music and views that really helps puts one in a excellent mood. :)

A beautiful sandy beach I see. :) If I could find a deserted one like that, I'd prefer it too. I am becoming anti-social I think. :)

Hi YTSL! Nothing against Germany, which has its own unique charm, but I'm glad to see the great outdoors of Hong Kong again. I wonder if you have that "good to be back" feeling whenever you return from abroad?

What gorgeous beaches. So clean. I might have run into the water clothes and all if I were hiking in such hot (too hot for me) temperatures. Great photos. Do you have any close ups of the waves? Demanding fan that I am....

I continue to be surprised by all the undeveloped areas of the SAR--following your link to the Sai Kung East Country Park it looks like there is a lot of great hiking trails (including a difficult looking one to the top of Sharp's Peak) and beach areas.

My own very limited experience with snakes is that they usually are interested in getting away although hopping over one of them, even the non-venomous variety (I hope) is probably a great way to get one of them on his way.

Your vacation in Germany sounded delightful but like duriandave I am glad to be reading your posts from Hong Kong again.

Re Ham Tin beach (the one in the photo): it's quite a hike there -- especially on a hot summer's day like yesterday -- to get there... otherwise, I think it would be so uncrowded! ;D

Usually, I'm happy to be back in Hong Kong... once the weekend comes along! But my German trip was so wonderfully relaxing that I have to admit to wishing it would last longer... so I was really glad to return to Hong Kong and find beautiful bright blue skies waiting for me. (Heck, I even got the bonus of a rainbow seen from my plane -- something I had never ever seen from that vantage point before!) :)

Believe me... I too was tempted to run into the water clothes and all. But I resisted the temptation and instead made for the beachside cafe and an icy drink! :D

And yes, I have close ups of the waves... can you wait for a few months? This since I've still got several more hike photo-essays before I get to that hike!

Yes, there really are a lot of great hiking trails in Hong Kong.

Re the snake: I don't think my hopping actually affected it that much. Rather, it was my companion's screams that seemed to do the trick!

Are you all talking about the bus hijack in Philippines. When i asked my students what happened yesterday, My HK student wanted to talk about this.

Less talk about it today than yesterday but people definitely are still thinking about it and it remains major news.

Was it just your Hong Kong student who wanted to talk about it? Must admit that as I watched the events unfold on TV, I knew it would be big news in Hong Kong but wondered if it'd be elsewhere in the world. Found that it was... for at least a day. But while other people appear to have "moved on", Hong Kongers most definitely have not... at least for now.