Castle on a hill (above Hirschhorn) 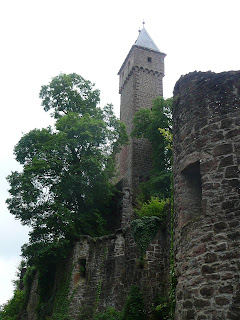 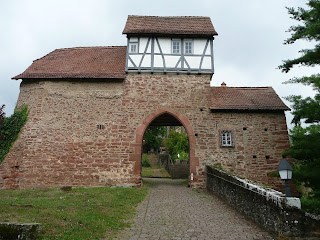 An old but still habitable part of the former knight's castle 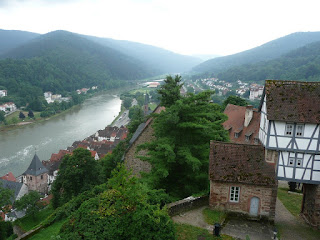 The view from the outdoor dining area of the
castle turned hotel cum restaurant
Ever dined in a castle? Some years back when visiting the Forbidden City in Beijing, I had pot noodles in a section of the former imperial residence that has been turned into a snack area -- but I don't think that really counts. So up until my recent German vacation, I'd say that the closest I ever came to doing that was having mulled wine and minced pies after a concert one cold winter evening in an English stately home known as Houghton Hall a few decades ago (when I was living and studying at boarding school in England).

But on the third full day of my recent German vacation, my German friend, her friend who was our host in Heidelberg and I went on a road trip up the Neckar River from that fabled university town that included a stop for lunch at a 13th century knight's castle that is but one of the many other castles in Germany that "offer hospitality" seemingly as a matter of course these days.

Situated on a hill overlooking the picturesque village of Hirschhorn, Schloss Hirschhorn is part ruined and part converted hotel-restaurant -- the kind of place that quite a few people choose to be married or spend honeymoons in. (And, indeed, during our visit there, we were witness to a happy wedding party!)

One on hand, although it may seem strange to think of the kind of structure that many people associate with warfare (or, at the very least, less peaceful days when those who could afford it opted to build residences on hills less for the view than for defensive purposes) having such social functions, this state of affairs provides some indication of how "normal" castles are for many Germans on account of their being such ubiquitous parts of so many German landscapes.

At the same time, it also shows that, for many people, there remains a romantic aura about these structures -- and while I wouldn't necessarily want to get married there (or married at all for that matter!), I definitely do find myself attracted to castles; not least because they appear to be places where my imagination is apt to feel free to roam... ;b

I am also one of those people attracted to castles. In Spain the is a chain of hotels run by the government, Paradores, that have taken many historic building and turned them into places to dine and stay. We were fortunate to have the opportunity to stay in a variety of old buildings and have experiences that the romantic in me loved.

Did you sleep in a four poster bed in one of the castles? Have to admit that I would like to some day (or should I say night? ;b). :)

I love the building in the second photo. Wouldn't it be fun to live there for awhile? Too bad you didn't spend a night in a castle.....a haunted one would be fun!

No thanks re the prospect of spending even just one night in a haunted castle. I already have had the scary experience of spending a night at a haunted ryokan, thank you very much! ;(