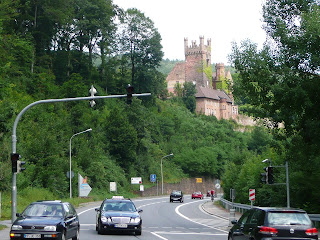 Mittelburg -- one of four castles, all built between
1100 and 1230 AD, visible from the road as it passes
through the Neckar Valley town of Neckarsteinach 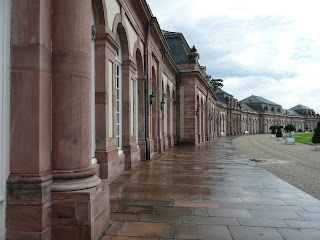 Schloss Schwetzingen -- an aristocratic summer residence
that appears more like a palace than castle to my mind
In the weeks leading up to my recent German holiday, my German friend and I held e-mail conversations that got me fully expecting that my vacation would be filled with visits to castles, cathedrals, churches, and brauhauses and biergartens. For all this though, I never expected that on my third full day in Germany, I'd not only be having lunch at one castle but also get driven on a section of the 1,200 kilometer long, officially designated Burgenstrasse (Castle Road) that included a town with four castles called Neckarsteinach and then spend a few hours touring another castle in the form of the ruined but still beautiful Heidelberg Castle!

Still, rather than feel like I had had my fill of castles for some time, that day only whetted my appetite for the sight of more of those structures. So it was with no small amount of joy that I discovered that the close to 200 kilometer-length (each way) train rides my German friend and I took from Mannheim to Cologne and then back the other way often effectively doubled as scenic Rhine River valley castle spotting opportunities!

In addition, on Day 9 of my German vacation, my German friend and I went and visited the charming town of Schwetzingen and its Schloss (which seems to translate to either castle or palace) -- which, like with Hirschhorn and Neckarsteinach, is located along the Burgenstrasse. Later down the road, I'll devote a photo-essay to showing the beauty of Schloss Schwetzingen's extensive -- and very impressive -- gardens. In the meantime, I hope you'll check out the photo above that shows but a section of just one of the schloss' wings and use it to let your imagination fly with regards to how big this place which was not given a single line of mention in Frommer's Germany as a whole is...!
Posted by YTSL at 11:25 PM

Is that Castle Road in the top photo? Nice to see what look like bicycle lanes.

You mentioned that you had lunch in one castle, and I'm sure that many are historical landmarks, but are there castles that are still being used as residences?

I like that first photo quite a bit. It reminds me of my very brief visit to Cardiff and all I could think of was "what would it be like to live in a town that happened to have an ancient castle in it?" Seems wonderfully different to someone like me who grew up in American suburbia.

Yep, that's Castle Road in the photo alright. And yes again re it having a bicycle lane. (One discovery on my recent vacation: the popularity of bicycling among Germans.)

And re castles still being used as residences: I'm sure that's still the case but don't have specific cases to cite. Also, something else to note: a lot of the castles, including Heidelberg's, actually are ruined.

You mention Cardiff -- funnily enough, the one and only time I visited, it reminded me of my hometown -- even if instead of a castle, we have an 18th century ruined fort. :)

It was indeed a super cool vacation -- and a thoroughly enjoyable one too! :)

No need to be jealous. You can go there too some time! :b

I've always thought castles were fortified whereas palaces aren't but keep coming across some that don't really fit my definition. I'm amazed that something as imposing as Schwetzingen (it looks like a palace to me, too) isn't mentioned in the guide book. Did it keep the crowds away, because that could be an advantage?

I think I'll still have to be jealous for a while more. :) There is no chance of me going to Germany any time in the near future. It's nice to see parts of the country through your blog though. :)

I will attempt to go to Tokyo in December though. Hopefully it'll work out. :)

Glad my blog entries help you to virtually visit Germany (then)! And good luck with your attempt to head to Tokyo in December. :)