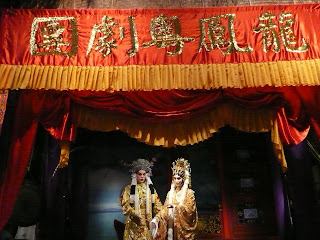 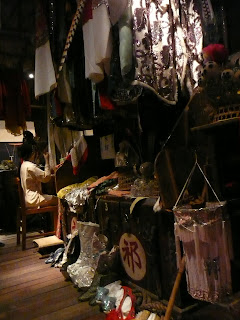 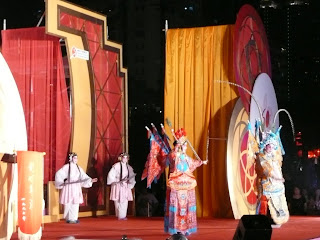 This week's Photo Hunt theme is one of those that long term Photo Hunters -- of which I guess I am one (and for the record, this is my 133rd Photo Hunt entry -- with the very first one being viewable here!) -- will recognize as having cropped up before. But no matter -- as this is one of those themes that can be captured by a camera in so many ways!

This time around, I'm shining a light on Chinese opera, particularly the Cantonese variant that predominates here in Hong Kong. A colorful costumed affair that can be performed indoors or outdoors, the kind of music that is associated with it is not for everyone but -- I have found -- can grow on you.

In any case, I have come to welcome learning more about it (via such as wonderfully detailed and large exhibits like those in the Hong Kong Museum of History and Hong Kong Heritage Museum) and taking in performances of the traditional Chinese art form, including at the recent Mid-Autumn Festival festivities in Victoria Park that included a lantern display and at the landmark Sunbeam Theatre.

(For the record, the first two photographs in this week's Photo Hunt entry -- including one that shows what the dressing room area of a Cantonese opera troupe can look like -- were taken inside the Hong Kong Museum of History while the third was taken at Victoria Park one special festival evening. Also, I really can't mention Chinese opera without also inserting the note that my favorite movie of all time happens to be the utterly sublime Peking Opera Blues!)
Posted by YTSL at 6:35 AM

I should have known this would be your choice this week YTSL and a good one it is too for the colourful photos. Happy weekend to you.

This was a great take on the theme. Although I've never seen a live Chinese opera, from what I know of it its always seemed like an amazing art form.

So beautiful and very appropriate! Mine is also a variation of a theme you've seen before on my blog. :-)

I heard the Cantonese opera scene in HK is very vibrant. I was invited by a famous HK opera artiste to do a study of the Cantonese opera in HK and see how our Government can support this traditional art in Singapore. It is such a beautiful art form that is worth preserving.

Uh oh, have I become predictable? Hope not that much! ;D

I think it's a really cool spectacle -- enjoy the visuals and the whole experience. (And in terms of music, have to say that the huangmei diao "Yellow Plum Opera" style is the one that is most enjoyable to my ears.)

Yes, I visited -- and recognised that event at which you looked to have taken quite a fair few interesting photos. ;)

Teeheehee -- and now you've got me wondering: are you an arts teacher-consultant???

i've always been curious about Chinese opera. i hope i'd get a chance to see it someday. great post!

i was thinking u would post on Chinese opera. bingo i was correct :)

Colorful. I hope to watch one soon.

The only venue that might be more fun is a traditional tea house à la Peking Opera Blues. ;)

Great post, YTSL - how I'd love to see what must be a spectacular show like a Chinese opera for real.

I have done Photo Hunt before but have only just come back after an 18 month break from blogging! Will try to stick to it longer this time!

I have one of these performance in front of my apartment for the last one month plus. It's driving me crazy with the loud volume... LOL! Moreover, their "international" choice of music can be quite "interesting". :P

Chinese opera looks so colourful! I agree that opera is not for everyone but it's something I have grown to appreciate over the years. I've never been to a Chinese opera though.

THanks for sharing. I have never seen a Chinese opera performed sadly.

If you can't see it live, there are plenty of Chinese opera movies. Also, you could always check out PEKING OPERA BLUES -- a great movie with some Chinese opera in it. :b

Yeeks -- either you (and JMB) have come to know me very well or I have become too predictable! ;O

Hope you get the chance. :)

I've been to a tea house to watch a show in Beijing -- it had Peking Opera bits but other elements as well (including that mask-changing stuff which is ever so impressive)! Highly recommended! :)

Happy return to Photo Hunting -- and blogging in general!

Hmmm... weird that you're having that experience. Is it Hungry Ghost month? Hadn't thought so!

Chinese and Western opera have their similarities but also great dissimilarities. E.g., is there such a thing as a Western opera that's funny? OTOH, have seen really comic Chinese opera performances.

You're welcome -- and thanks for appreciating once again. :)

I like these, especially the middle one, it tells such a story! Great job! I am totally impressed that you've done 133 of these that is well over two years of dedication. Applause!!!

We went to a Korean opera once ... the subtitles were on the side of the stage.

Love these photos. I'd love to see Chinese opera someday. :)

Perfect photohunt!
Mine is washing ashore.

Music it is from a Yard sale so not formal but the instrument makes it almost formal.

I have scene something similar like you show when I was there, MB

The sets are glorious, too-- it must be a stunning event to see and hear!

Happy Photo Hunting! I hope you get a chance to visit my post today at New York Traveler.net. Happy trails!

I must say, I'd love to see some of this in real life. A feast for the eyes as well as the ears.

Photo Hunting's fun -- now as well as before. So while the going's good, why not continue? :)

I'm going to be a pedant here: if the "subtitles" are on the side, then there's side-titles! :b

If you can't see it live, check out an English subtitled Chinese opera movie -- they exist! :)

We sure did go for different takes on the theme! :D

Chinese opera really is a visual as well as aural feast. Even in non-traditional settings, there's the interesting costumes, make-up and body language to look at.

So when you are coming over to this part of the world? ;b

Thanks for coming by. Chinese opera's are really wonderful, i have seen one in cable and they were truly amazing. Happy weekend, hope you can drop by sometime.

Great take on the theme. Thanks for dropping by.

In fact the gym can be turned into a disco if we want ;p Since they also offer dance classes hehehe...

Glad you managed to watch Chinese opera -- even if only on TV! :)

Thanks for explaining your gym's super sophisticated music set up! Really got to wondering when seeing your photo over on your blog. :)

never saw a Chinese Opera but I kind like the customs, I suppose it's like an american opera

Actually, if by American opera, you mean Western-style opera, then Chinese opera's actually quite different from it in quite a few ways! ;b