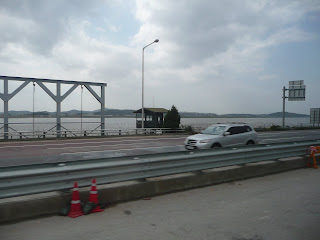 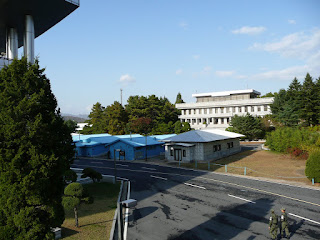 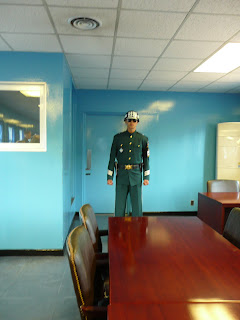 In military terms, a demilitarized zone (DMZ) is where military activity is not permited. So it's somewhat ironic that the Korean Demilitarized Zone -- which I visited on my recent Korea vacation -- is one of the places in the world where I've most greatly felt as well as seen the military's frankly quite intimidating presence. (In contrast, contrary to the fears of many pre-1997 Handover, the Chinese military are pretty much close to invisible in Hong Kong post its being handed back to China by the British...!)

Miles before I got to the very center of the Korean DMZ in the form of the Military Demarcation Line (MDL) -- where I got to briefly step on North Korean soil -- in the Joint Security Area (JSA) of Panmunjom, the military presence was already discernible in the form of such as regular sentry posts and miles of barbed wire posted along the sections of the Han River that acts as a natural border between South and North Korea (see the photo at the top of this Photo Hunt entry).

But it was upon getting into the DMZ itself that things really did start feeling rather hairy -- with the situation feeling pretty tense after we were issued a series of injunctions, including "don't point" (because your pointing hand resembles a gun from afar and the North Korean border guards might shoot you as a result) as well as "don't take photos in the area unless you are first given the okay to do so".

Re the two other photos in this entry: the middle photo is of the "Truce Village", with the blue huts containing such as the Military Armistic Commission (MAC) Conference Room -- where talks take place between representatives of the two Koreas -- being under United Nations jurisdiction and the gray hut to the side and large building in the background being North Korea's. And the final photo of this series of three is of a combat-ready South Korean soldier standing in the North Korean side of the actual MAC Conference Room. (The two sides take turns to man it, it seems.)

Incidentally, one of my favorite Korean films is entitled and revolves around the Joint Security Area. Containing moments of wonderful humanity along with painful division, angst and pathos, the 2000 film by Park Chan Wook is one that digs deep to provide audience with revelatory glimpses of the Korean psyche. And yes, I have to say that the film was largely behind my wanting to visit the JSA at some point in my life.

This was an excellent post and you brought up issues that I wouldn't have thought of. It is ironic for a demilitarized zone to have such a strong military prescence. Also the idea of being careful about pointing. This put a new meaning to my being brought up that it's not polite to point.

Thanks for visiting mine and I so agree that it's sad all the wars and monuments. So much loss and so sad that humans can't find our way to give peace a chance. I almost posted about that since yesterday was the blogblast for peace I participate in and then today I was posting my photohunters military/veteran post. I decided that have a peace post and then a veteran post sort of spoke for itself.

Okay, that was quite an experience! Perhaps the reason why there are so much military activity in a DMZ is due to the fact that each side needed to guard their own side. And knowing history, DMZ are always contention areas.

And the pointing hand thing was just scary. What if you accidentally pointed? Eek! I can't imagine the consequences.

Great informative post! And you touched NK soil! I would really want to visit NK one day. It's just so full of mystery and all. I read a book about Kim Jong-il and the man's nuts!

Interesting post indeed! Thanks for sharing those bits of info.

That soldier looks like he is ready to pounce on intruders :D

That's something interesting. It's good of you to share this with us. :)

Very interesting post as always - thanks for sharing this.
Hope you have a good weekend.

( This week´s theme was a really difficult task for me....therefore I´m skipping this week.)

Thanks for visiting, YTSL. Those poppies were first made in remembrance of the First World War, which was to be the war to end all wars, so it's rather sad that they're STILL being made by veterans from all of the other wars since and, here in the UK, tomorrow we shall be including too many soldiers killed only this week in our remembrance services.

Thanks for this post. So very informative and a completely different take on a country which is on my 'places to see' list.

your post reminds me of a James Bond movie.:p very informative, too.

A very interesting pot, and quite a bit scary too!

DMZ is such a hot spot, hope war will not resume in Koreas.

Thanks for your comments. Really appreciate them.

DMZs are indeed contentious areas. More than incidentally, the Korean DMZ has been where several confrontations and other violent incidents have taken place.

Glad you found the contents to be of interest -- and you're welcome. :)

Thanks for coming over and paying a visit even if you did not post a Photo Hunt entry yourself this week! :)

Thanks for your return visit. And yes, it is so sad to that think "the war to end all wars" turned out to not be that.

I think you mean post and if so -- yes, indeedy re its scary quality! :b

Unofficially, the two Koreas never signed a peace treaty, so they're still theoretically at war! But I know what you mean -- hope there won't be more violence and unnecessary blood shed.

Very good post ! I think it is very difficult for people in a country who never had a war on their territory to imagine what horror it is. Soldiers and Veterans only did their jobs or had to do it. Why a veteran's day ?

That's a well written post. I learned something today. Thanks! :)

well written YTSL. doesnt seem to b relevant to me here n i skip it in the papers about this issue but reading yr post makes me realize it is not jus another foreign news item

It's very dangerous but then its one of the most visited destination here in Korea..

Check out my husband's 20 years in the navy

Interesting post as always. Not my favorite theme for the hunt, but the contributions are very unique.
Happy weekend!

Most interesting post. I'm going to come back later to read it more throughly.
Thanks for visiting. The phrase Never Forget is in reference to 9-11 when the Buildings in NY were attacked. The photos were from a traveling veteran's memorial wall. I forgot to add the link for that info; which i've since added.

I didn't get to see the DMZ during my tour here but my buddies told me that its an awesome place..

Take a look at my HERO

i've asked my friend (who was assigned there before) about the term DMZ too. It's quite contradictory to its name and it's kinda tense to be in that place.

Thank you for always writing and showing me things that makes me think!

Have a great weekend
Anna

Great post. It's informative and make me jealous at the same time because I wish to visit Korea, too.

Thank you for sharing -- I never thought about what it would be like to be near a demilitarized zone.

The DMZ is indeed a weird place -- and an interesting one to visit because of it! ;b

I'm not sure that there's a territory in the world that has not had war take place on its land, alas. Rather, it's just a case of whether people have experienced war in their lifetime or not. :S

Thanks, the (former) teacher in me loves it when people tell me they've learned something from my writings! :)

I know what you mean about wanting to skip certain pieces of foreign news because they seem to take place in lands too alien and/or far away. At the same time, just because something or someone is foreign doesn't mean we can't relate to it/him/her.

Is it one of the most visited destinations in Korea? It can seem like it when you're in the tour group but for certain nationalities, it's actually not easy -- and for still others, downright impossible -- to get in to the tour groups!

I know what you mean about this Photo Hunt theme being not a favorite. But, yes, agree that it's yielded some interesting entries indeed.

It'd be cool if you did come back to read more thoroughly! :)

Awesome maybe -- but definitely not an easy and risk-less assignment, right? :O

Sounds like your friend's opinion is similar to mine then!

Thanks for your comments and visit. :)

Hopefully some day, you too will visit Korea! :)

You're welcome -- and thanks for visiting and thinking. :)

Isn't that an oxymoron of a phrase when you think about it.

Good post and photos. Happy weekend to you YTSL>

I would probably end up with a few bullets if I visit this place. I start pointing when I'm excited. haha...

This is an awesome experience! I want to go visit too.

You're welcome -- and thanks for checking it out. :)

I just hope that a day will come when peace reigns and there will be de-militarized and militarized zones -- just plain un-militarized -- ones in Korea.

Only visit if you can control yourself from pointing!!! :D

Very interesting, thank you for sharing that :-)

Thanks for the complimentary comments -- and for visiting too. :)