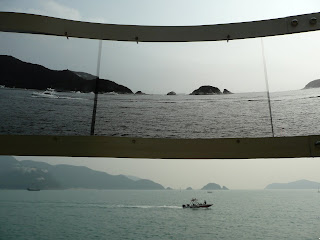 Ng Chin Pong's Nothing Compares --
on display on the Seaview Promenade
looking out towards Repulse Bay, Nam Wan
(South Bay) and their surrounding areas 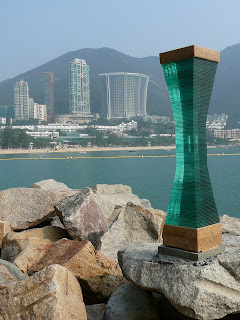 As this weekend winds to a close, I can only look back and note that it's been one of the more culture vulture weekends I've had in a while. For yesterday was spent visiting a museum (the Museum of Coastal Defence -- one of whose current special exhibitions is devoted to the Hong Kong Garrison of the People's Liberation Army) and the nearby Tam Kung Temple, then viewing a Hong Kong film classic (King Hu's The Valiant Ones) in the evening, while I am writing this blog after having returned from attending the City Chamber Orchestra of Hong Kong's all Haydn concert earlier this evening.

Then there were the couple of hours or so spent checking out the one day (only) event that is/was Sculpture on Hong Kong Sea earlier today. If truth be told, the 30 works of art installed out in the open air by the scenic surroundings of the Seaview Promenade that stretches from Deep Water Bay to Repulse Bay over on the southern side of Hong Kong Island were of deeply varying quality -- with at least one being rather justifiably deemed as "shit" by one man whose comments to his companion were on the loud (and opiniated) side.

On a more positive note, I just as honestly think that there were some installations that really worked in me in terms of getting me to stop and appreciate them -- and actually be amazed by the creativity of the idea behind them as well as enjoy their visual effects. And as it so happens, I don't think it coincidental that these appeared to be the ones whose artists took to heart the project organizers' strong encouragement "to take into account the specific site and its surroundings, to make a piece that would enter in some sort of dialogue with the place..."

So thank you to the organizers and the participants of this art festival -- not least for giving me a good reason to finally set foot in Repulse Bay (which, for all of its physical beauty, I had been previously reluctant to because of its reputation for being where the snobby rich hang out and tourists go to gawk). And I do hope that there will be more days of art like this one to look forward to in the future.

Quite a weekend. The walk along the promenade from Deep Water Bay to Repulse Bay looks like a lovely walk--at least on Google maps.

The Haydn concert must have been fun. The forepiano concerto could have been a particular challenge--modern players digging into their steel stringed instruments can tend to overwhelm the quieter sound of the fortepiano. When it is done well, however, it is amazing, like hearing Haydn the way it sounded when he wrote it.

My wife and I have often enjoyed walking in areas full of wealthy people--Park Avenue in New York City for example--to see some of the finely wrought details on many of the buildings. We really wouldn't care to be overrun with camera toting tourists, though, a different matter entirely.

YTSL, I love those sculptures. The two that you posted here definitely speak with the environment. And I must say that your photos and the way you framed them perfectly capture that dialogue.

BTW, how was The Valiant Ones on the big screen?

The Haydn concert was good but I think I would have appreciated it more if it weren't on a Sunday evening. As it was, I was a bit short of energy. Still, I did really enjoy the fortepiano playing and must say that I'd love to try playing it myself!

I'm glad you love the sculptures and my photos of them because I am planning to put up one more blog post about the Sculptures on Hong Kong Sea event soon -- featuring my favorite sculpture from it. :)

And re "The Valiant Ones": I've decided on the face of the viewing that it's my second favorite King Hu film that I've seen (after "Raining In the Mountain"). :)

I read on the Sculpture on Hong Kong Sea site that anothermountainman was an invited guest. Did you happen to take a photo of his work? I think you know how much I like his redwhiteblue works.

I forgot that anothermountainman did those works... but... ummm... I think you're going to like my next planned blog post! ;b