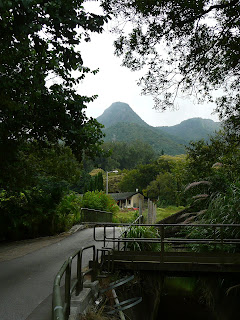 My initial impression of the area that lies north-west
of the distinctively shaped Kwun Yam Shan
(Goddess of Mercy Mountain) was that
it looked pretty idyllic as well as plain pretty... 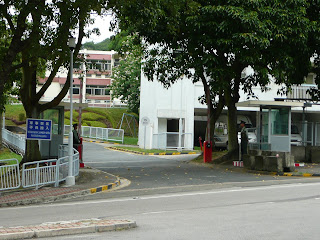 But it turns out that just round the bend
is the largest military base in Hong Kong!
It's pure coincidence, I swear! That is, that just one day after I wrote about how one hardly notices the military presence in Hong Kong (in contrast to, say, Korea's Demilitarized Zone), I happened to go on a hike along the Kap Lung Forest Trail that ended up at a bus stop just outside the People's Liberation Army's Shek Kong Camp.

Local historian Jason Wordie made the following comments in his Streets: Exploring Kowloon (Hong Kong University Press, 2007:194) about the village nearby (which he prefers to spell as "Sek" without a "h"):-

A visit to Sek Kong Village these days feels dreadfully like ghosts come-a-haunting to those who knew it even a decade ago. Since the [H]andover, Sek Kong Village has not so much changed functions but entirely lost its reason for existence. [China's] People's Liberation Army, unlike the British Army in previous times, only come to Hong Kong for short periods and are not permitted to bring their families with them. Consequently, the dozens of empty married quarters and the school, hall and supermarket that serviced them are completely redundant -- and they look it!

After my visit there today, I can vouch for parts of the area feeling somewhat abandoned. But although I did see many buildings that appear to now be unoccupied and/or run-down, I also saw a couple walk out from the base past the sentry point in the second photo above to presumably get some fresh air and exercise as I waited for my bus. (Maybe they're married soldiers? Is this allowed in the PLA?) Also, as the bus I eventually boarded made its way past the base, still more military personnel made their appearance -- doing such 'regular' things as playing basketball as well as just rather casually walking from one destination to another.

Strange as it may seem, these military 'spottings' have actually now made me more curious about the PLA Garrison in Hong Kong than previously. So, hmmm, maybe I ought to go and check out the Hong Kong Museum of Coastal Defence's on-going special exhibition on those troops before it closes then! ;b

Just a couple of not very relevant comments:

The first photo, before clicking on it to see the large version, struck me as looking exactly like a Central American vista--Costa Rica or Guatemala popped into my head. Once one can see the "first world" details though--the street light, the stout steel railings, etc.--it is clear that it couldn't be.

In the United States, too many references that would be the U.S. equivalent to being "curious about the PLA Garrison in Hong Kong" would get your name on a list that might keep you from boarding a commercial flight or renewing your passport.

The picture of the entrance to the base (and this is probably my imagination) looks as if it were taken in a hurry. Or at least it looks more like a snapshot than the more typical perfectly framed pictures I have gotten so used to.

Fascinating post. You make me to want to visit Hong Kong!

Re your associations with Costa Rica or Guatemala: Well, I think they have the same sort of climate as Hong Kong -- and Shek Kong is one of those parts of Hong Kong that can surprise non-Hong Kongers in term of how rural Hong Kong can be.

"In the United States, too many references that would be the U.S. equivalent to being "curious about the PLA Garrison in Hong Kong" would get your name on a list that might keep you from boarding a commercial flight or renewing your passport."

"The picture of the entrance to the base (and this is probably my imagination) looks as if it were taken in a hurry."

Wow, you have been paying really close attention to my photos! Yes, it was taken in more of a hurry as usual as I wasn't sure if photography was allowed of PLA soldiers at the base! :D

Thanks. You made my day with your comments! :)

Did you find my blog via Gweipo? Have also linked your blog -- so wow, two new links in just a few days! ;D

Yes, indeed, through the Mother of the Board!

Thanks for the confirmation! :b