Hand on heart: I had wanted to hike in the area of -- and check out -- the 12 acre citadel known as the Shing Mun Redoubt that was part of the Gin Drinker's Line that has been described as Hong Kong's equivalent of France's Maginot Line for a while now. However, this Hong Kong movie geek has to admit that her interest in visiting the military installation that was infamously overrun by the Japanese in record time during World War II increased post seeing it featuring pretty prominently in Tactical Unit: Comrades in Arms (2009), the Milkyway Image production that sent Simon Yam, Maggie Siu, Lam Suet and co. deep into the Hong Kong countryside.

But long before we went exploring the Shing Mun Redoubt and, actually, before we even we got to the official start of the trail, I already had seen many sights that made me so happy that we had decided to go out hiking that beautiful day. Put another way: wouldn't you agree that the following make for a good warm up to other remarkable sights to come? ;b 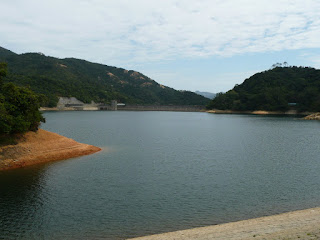 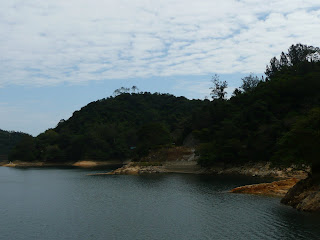 An even better photo, to my mind,
of Shing Mun Reservoir and the area nearby 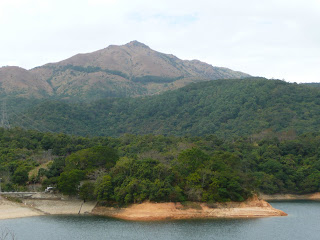 One of the many formidable Hong Kong peaks
that I've yet to hike up (and maybe never will!) 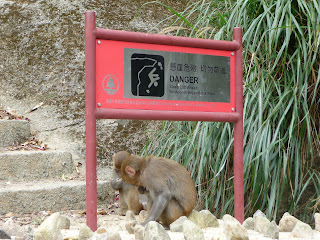 So why haven't I hiked more in Shing Mun
Country Park than I have thus far?
Two words: wild monkeys (more so
than the fear of steep cliffs, actally!)! 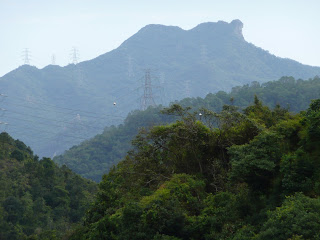 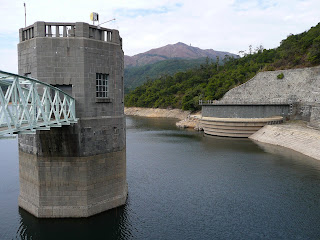 Before beginning the Shing Mun East Country Trail
proper, my hiking companion and I were distracted by
the reservoir's beauty and consequently ventured a bit
out of the way from the trail's official starting point 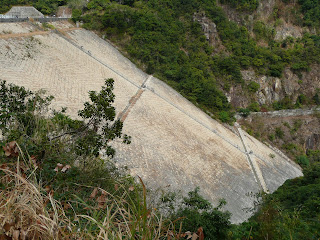 Like a scene from a movie, we saw
a bunch of bicyclists carrying their bicycles
commando-like down that series of steep steps! 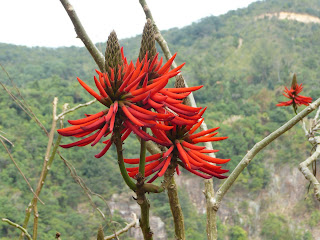 The flowers of the Ivory Coral Tree
are like few other flowers I've seen in my life!

Just off the record ;) I sometimes wonder how u manage to find time to go for hikes etc. From reading yr blog it seems u have so much to occupy your time.

Short answer: I *make* time to go on hikes! Long answer: it also helps that I don't work on Saturdays as well as Sundays. Also, I actually don't hike every week. E.g., the whole month of April of this year and last year, I didn't hike because the Hong Kong International Film Festival's on then... ;)

In regards to the wild monkeys, are they known to attack people or are you just wary of monkeys in general?

And that shot of the bicyclists is crazy. They are truly like ants at that scale!

I'm really awed by those steps. I had to enlarge the photo just to see the bicyclists you mentioned. Wow!

Thanks for the comments re the photos in the photo-essay. They're much appreciated! :)

Re the wild monkeys: they're known to harass folks for food! As are ones to be found -- and often in bands -- at the Penang Botanical Gardens!!!

Thanks and do come back for more later! And thanks too for taking the trouble to enlarge the photo to check out the bicyclists! :)