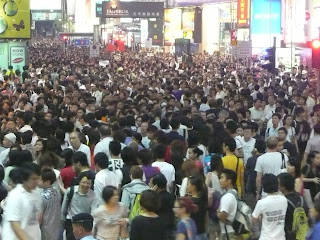 Causeway Bay scene last Thursday evening
As regular visitors to this blog know full well, I've done my share of hiking in Hong Kong. One reason why I've done more hiking in Hong Kong than elsewhere is because hiking trails really are pretty easy to get to here -- and on public transportation to boot! Another reason is because hiking gives me a way to occasionally get away from the madding crowd that is to be found in many of the Big Lychee's urban areas.

Last week, I scared a friend who is planning his first trip to the territory by e-mailing him the above photo of what I caught a section of Causeway Bay looking like one evening. But as I quickly reassured him, although this popular shopping and restaurant district is indeed often full of people, that really was the most crowded I have thus far seen the area to be -- the reason being that the photo was taken as the estimated 150,000 crowd who had crowded into nearby Victoria Park for the June 4 candlelight vigil was dispersing.

So to those who are wont to quibble re the numbers last Thursday night: all I will say is that, as the sea of humanity in the photo shows, there really was a whole lotta people out and about in the area that evening. And for once, I really don't think that the majority were there (just) to shop and/or eat... (though, in my case, I have to admit that after attending the vigil, I did go ahead and make straight for an area Tsui Wah for a late dinner! ;b )

Geee...I'm claustrophobic. No way I'm going to squeeze inside there. Are there any pick-pockets like the movie in Swallow?

FWIW, I squeezed into part of that crowd in Victoria Park earlier that evening.

And while there may be be pickpockets in Hong Kong (though I doubt that they're as stylish as those in "Sparrow"), I as well as no one I know -- touch wood -- have yet to encounter any.

(OTOH, I have at least two relatives who have got pickpocketed in London over the years... )

Wah! I've never seen Causeway Bay so crowded either, though I will dare say this photo captures the vertiginous feeling of high density that I experienced on my first trip to Hong Kong.

You guys are freaking me out. I loved NYC but hated the crowds (if that makes any sense).

London didn't bother me. Wonder how HK compares to NYC?

In the movies, it never looks that crowded.

Well, I've never been to NYC, so I can't compare. HK is definitely a crowded place, but it's only on the weekends, especially Sunday when all the domestic workers have their day off, that it feels really overwhelming. But if you can get in the mood, it's pretty fun!

Hong Kong and New York have crowds. One difference: Hong Kong has wider streets in general. OTOH, I feel safer in Hong Kong to walk on the "smaller" streets that run parallel to the well known streets and/or can get you to your destination as conveniently as the major roads.

Agree that those parts of Hong Kong (notably Central and Causeway Bay) that are filled with off duty domestic workers on Sunday can be overwhelming. One reason is that many of the domestic workers are not mobile - effectively picnicking and hanging out with friends. If the crowd moves, it doesn't feel so overwhelming. At least to my way of thinking anyways.