Vending machine wares (or should it be wear?!) 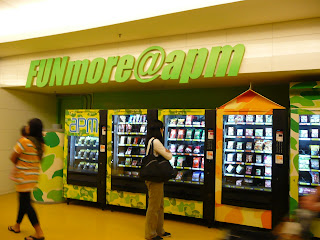 What's attracting the attention of one shopper
at Kwun Tong's apm Mall? 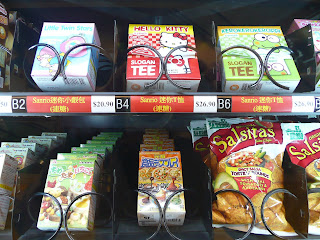 Could it be the Hello Kitty slogan tee
as opposed to the packet of tortilla chips? ;)

Vending machines have intrigued me since I encountered them on childhood visits to London, England. All these years later, I still can recall what a treat it was when my mother passed me a few pence to get a Kitkat from a vending machine located in a tube station several hundred feet underground. And I still regret that I never got to an eatery in New York that I had read about where one bought food from vending machines!

Although I've seen ice cream and lollipops as well as the more usual canned drinks and such being offered up for sale in vending machines here in Hong Kong, the ones in Kwun Tong still yielded surprises. I mean... a Hello Kitty slogan tee?! (And yes, I was tempted -- especially considering the low price -- except for one thing: I couldn't see what was the size the T-shirt bearing Kitty-chan's visage being hawked... ;b )
Posted by YTSL at 8:50 PM

I've heard about some of the odd items that can be bought from vending machines in Japan...

Here in the U.S. at the Macy's near my office, there used to be a vending machine that sold i-Pods and other high-end items. It didn't last very long. Personally, I would never buy anything worth more than a couple of bucks from a vending machine.

When I was in Taiwan, I loved the capsule toy vending machines. I could definitely waste a lot of money on those!

I too have heard of some of the odd items on sale from Japanese vending machines. Will say though that the most sinful items I saw were alcoholic drinks! :D

The capsule toy thingies? We have them here in Hong Kong too! :)

I think you should get the Hello Kitty t-shirt no matter what the size :)

One reason why I wasn't too tempted by the t-shirt: I already have a Hello Kitty t-shirt... bright red and emblazoned with "I love Hello Kitty" on it, must admit that I tend to wear it as joke more than anything else... and some years on the third day of Chinese New Year as that's when I run out of new red clothing! ;b

No soiled underwear in Japan? Me neither. I wonder if that is an urban legend. My favorite vending machine fashion comes from Japan as well - the outfit that can turn you quickly into a faux vending machine if you think someone is after you. Very cool.

I wonder too if it's an urban legend. Even when I accidentally walked through a red light district while exploring Kokura town one evening, I didn't see those items being offered up for sale -- in vending machines or elsewhere!

And heheh re that faux vending machine outfit. Thinking of wearing it one Halloween? ;b

"And I still regret that I never got to an eatery in New York that I had read about where one bought food from vending machines!"

I wonder if you are thinking of the Horn and Hardart Automat. They weren't really vending machines, although they worked that way for the customer. There were little glass doors in a wall, behind which was a kitchen where cooks prepared sandwiches, pies and other things. Each door had only one item behind it so when a customer put his money into the slot, opened the little door and took his dinner/desert/beverage one of the workers would replace it.

There were busy change booths--when the Automat started, around the beginning of the last century they operated on nickles only.

They were very popular during the depression in the U.S. where unemployed people would gather for a five cent cup of coffee and make "automat soup" consisting of hot water, tomato ketchup, crackers and whatever else they could get for free.

Some movies made during the 1930s and a few set in the 30s featured automat scenes. There were still a few around when we lived in NYC but were a vanishing breed.

Am not sure which automat but definitely was thinking of *an* automat! And thanks much for the extra information re these eateries. :)